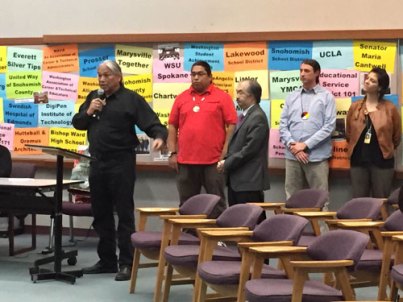 Matt Remle (blue shirt) with Denny Hurtado and Michael Vendiola from the Office of Native Education providing testimony to the Marysville School Board to adopt the STI curriculum. Photo by: Tulalip News/ Brandi N. Montreuil

The Washington State legislature has introduced a bill requiring Northwest tribal history, culture, and government to be taught in the common schools.

Washington SB 5433 is an amendment to the 2005 House Bill 1495.  H.B. 1495 “encouraged” Washington State school districts to teach Northwest tribal history, culture, and government.  The Since Time Immemorial tribalsovereignty curriculum (STI) grew out of H.B. 1495 and was developed in partnership with the 29 tribes in WA State and the State’s Office of Native Education.

Since its passage, only two school districts in the state have adopted STI as core, or mandated, curriculum.  The Marysville school district located just north of Seattle and whose school boundaries include the Tulalip tribes became the most recent to do so.

State law makers are now seeking to have the curriculum required in the State’s schools with the introduction of S.B. 5433.

“The legislature recognizes the need to reaffirm the state’s commitment to educating the citizens of our state, particularly the youth who are our future leaders, about tribal history, culture, treaty rights, contemporary tribal and state government institutions and relations and the contribution of Indian nations to the state of Washington. The legislature recognizes that this goal has yet to be achieved in most of our state’s schools and districts. As a result, Indian students may not find the school curriculum, especially Washington state history curriculum, relevant to their lives or experiences. In addition, many students may remain uninformed about the experiences, contributions, and perspectives of their tribal neighbors, fellow citizens, and classmates. The legislature finds that more widespread use of the Since Time Immemorial curriculum developed by the office of the superintendent of public instruction and available free of charge to schools would contribute greatly towards helping improve school’s history curriculum and improve the experiences Indian students have in our schools. Accordingly, the legislature finds that merely encouraging education regarding Washington’s tribal history, culture, and government is not sufficient, and hereby declares its intent that such education be mandatory in Washington’s common schools.”

If passed, Washington State would become the second state to mandate the teaching of tribal sovereignty curriculum. Montana is currently the only state to mandate Indian education for all state schools when it passed House Bill 528— the Indian Education for All Act, in 1999.

Matt Remle (Lakota) works for the Office of Indian Education in the Marysville/Tulalip school district and was on the curriculum committee that helped pass the districts requirement to teach the Since Time Immemorial tribal sovereignty curriculum in the Marysville schools.