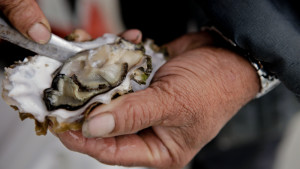 Pacific Oysters are most vulnerable to corrosive waters during their first few days of life at the time when forming shells are critical to their survival.
Katie Campbell

The Pacific Northwest faces a higher risk of economic harm from ocean acidification than other parts of the country, according to a new study released Monday.

The study, published in the journal Nature Climate Change, found a “potent combination” of risk factors along the coasts of Oregon and Washington. The region has cold ocean water that absorbs carbon dioxide more readily than warmer water, and it has upwelling ocean currents that bring corrosive water to the surface.

Meanwhile, the Northwest also has a well-developed shellfish industry that produces more than $100 million a year in sales and supports thousands of jobs. Shellfish hatcheries in northern Oregon supply oyster larvae to the entire region’s aquaculture industry.

George Waldbusser, an ocean science professor at Oregon State University and co-author of the study, said it was the first time scientists analyzed social vulnerability as well as the natural hazards of ocean acidification.

Waldbusser said while ocean upwelling does create  a “hot spot” for acidification in the Northwest, the region also has a lot of resources within universities and marine labs devoted to mitigating the negative impacts on the shellfish industry.

“We are still finding ways to increase the adaptive capacity of these communities and industries to cope, and refining our understanding of various species’ specific responses to acidification,” he said. “Ultimately, however, without curbing carbon emissions, we will eventually run out of tools to address the short-term and we will be stuck with a much larger long-term problem.”

Study co-author Julie Ekstrom at the University of California-Davis said the risks to the Northwest shellfish industry are already fairly well known.

“Ocean acidification has already cost the oyster industry in the Pacific Northwest nearly $110 million and jeopardized about 3,200 jobs,” she said.

A major oyster die-off in Oregon from 2006 to 2008 called attention to the problems acidic water can cause for developing shellfish, who depend on calcium carbonate to build their shells. Ocean acidification reduces carbonate in the water, making it harder for shellfish and corals to survive.