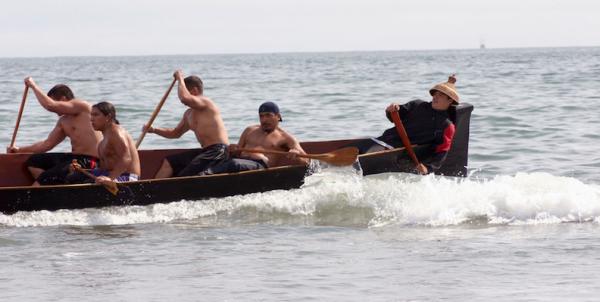 The 2015 Canoe Journey will consist of several regional canoe journeys. When no indigenous nation stepped forward and offered to host in 2015 after the 2014 Canoe Journey/Paddle to Bella Bella, the annual gathering of Northwest canoe cultures appeared to be headed for a hiatus. But canoe skippers wanted to see the journey continue, and so a new approach emerged: Instead of one large Canoe Journey, there will be several journeys hosted in various regions of the Salish Sea.

At a Canoe Journey skippers meeting on Jan. 24, in the Suquamish Tribe’s House of Awakened Culture, the plans for this summer’s gathering – or gatherings – started to take shape.

Dates aren’t set yet – the Canoe Journey usually takes place in July — but it appears there will be a journey hosted this summer by the Ahousaht First Nation, on the west coast of Vancouver Island; the Lower Elwha Klallam Tribe, near Port Angeles; the Sliammon First Nation at Campbell River, B.C.; and the Semiahmoo First Nation in Surrey, B.C.

Bennie Armstrong of Suquamish’s Tana Stobs Canoe Family told ICTMN he’s filed permits, and is in talks with Seattle’s parks department regarding use of Genesee Park for a hosting in Seattle, the ancestral land of the Suquamish and Duwamish peoples. He said there would be a couple of days of protocols – songs, dances and cultural sharing – but canoe families would be responsible for their own meals.

The Canoe Journey is a considerable logistical and financial undertaking. Planning and fundraising takes at least a year, and some host nations have installed roads, developed camping areas and parks, and built buildings to accommodate the festivities and thousands of guests. The host nation also hosts breakfast and dinner each day for all guests, and closes that year’s Canoe Journey with a potlatch.

Based on past fundraising goals, host nations usually expect to spend at least copy million.

Canoe families – those in the canoes, as well as support crew and family members – travel, sometimes up to three weeks, from their territories to the host territory, visiting indigenous nations along the way to participate in traditional protocols and share languages, songs, dances, and traditional foods. Once all canoes arrive at the final destination, a weeklong celebration follows.

The series of regional journeys will help keep costs down for everyone while “keeping the spirit of tribal journeys alive in 2015,” Armstrong said.