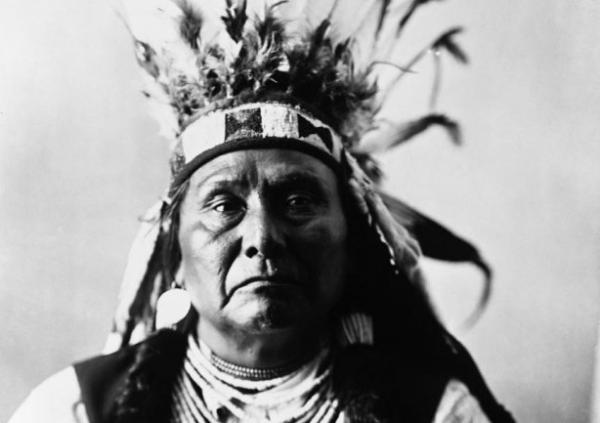 If approved by Oregon’s legislature, Chief Joseph’s statue would be the eighth of an indigenous figure in the National Statuary Hall. The others:

Sacagawea, Lemhi Shoshone (c. 1788-1812), guide and interpreter for the Lewis and Clark Expedition; given by North Dakota in 2003.

Since 2003, seven states have replaced statues with those representing figures they feel better represent their history or contributions to humankind. In August 2014, then-Oregon Gov. John Kitzhaber established the Statuary Hall Study Commission to determine whether Oregon’s statues of pre-statehood leaders Dr. John McLoughlin (1784-1857) and Rev. Jason Lee (1803-1845) should remain or be replaced by other notable Oregonians.

Commission chairman Jerry Hudson notified Kitzhaber and legislative leaders on January 26 that the commission had unanimously agreed to recommend the statues of McLoughlin, the Hudson’s Bay Company’s superintendent at Fort Vancouver, and Lee, missionary and founder of Willamette University, be returned to “places of honor” in Oregon and that “two equally worthy individuals who represent different chapters in Oregon’s history” be installed in National Statuary Hall, according to the commission’s website.

On March 4, the commission made the recommendation formal with a vote. According to KGW.com, Chief Joseph received seven votes from the nine-member commission, Duniway received six.

Jim Boyd is chairman of the Confederate Tribes of the Colville Reservation, where descendants of Chief Joseph’s Wallowa band are enrolled today.

“The statue of Chief Joseph at Statuary Hall in D.C. will be a great honor to Chief Joseph and to all those who have been left a legacy that has helped mold who we are today as very proud Indian people,” Boyd said.

“He stood strong and fought hard for his people and territory in a way that will always be remembered, and will continue to inspire and guide what will be for generations to come. It is a great thing that the state of Oregon is initiating this legislation.”

According to a state biography, Chief Joseph, or Heinmot Tooyalakekt (Thunder Rising to Loftier Mountain Heights), was born in 1840 in the Wallowa Valley of eastern Oregon. His father, Tuekakas, was the leader of the largest of independent Nimiipuu, or Nez Perce, bands living in Oregon, central Idaho, and southeastern Washington. Heinmot Tooyalakekt became leader in 1871 upon his father’s death.

Heinmot Tooyalakekt’s band never agreed to an 1863 treaty that surrendered 90 percent of Nimiipuu lands, and resisted the federal government’s order to abandon their ancestral lands and move onto a small reservation.

According to the biography: “In meetings and councils from 1874 to 1877 with army officers, Indian agents, and a delegation from Washington, D.C., [Heinmot Tooyalakekt] argued persistently that the resistant Nez Perce bands were not bound by the 1863 treaty. As a follower of the Dreamer religion of the Columbia Plateau, he pleaded as well that his people were intimately bound to their homeland and could never leave it, and that to become farmers, as the government insisted, would violate the Earth Mother.”

In spring 1877, Gen. Oliver O. Howard, commander of U.S. forces in the Pacific Northwest, insisted that all resisting bands report to the reservation within a month. (According to another bio, this forced removal violated the 1855 Treaty of Walla Walla, in which the Nez Perce reserved 7.5 million acres of their ancestral lands and the right to hunt and fish in their usual and accustomed territory.) Howard’s order resulted in the Nez Perce War of June to October 1877.

Heinmot Tooyalakekt and other Nimiipuu were captured 40 miles from the U.S.-Canada border. It was here, at the base of the Bear’s Paw Mountains near present-day Chinook, Montana, that Heinmot Tooyalakekt made his brief speech of surrender that reportedly ended with, “From where the sun now stands I will fight no more forever.”

According to the state’s biography, Heinmot Tooyalakekt “was never a war leader. He was, rather, a diplomat and a negotiator, and he made his greatest contribution in that role after the war.” The U.S. exiled the Nimiipuu to Indian Territory, present-day Oklahoma. For eight years, Heinmot Tooyalakekt campaigned for his people’s return to the Pacific Northwest. He spoke with the press, politicians and President Rutherford B. Hayes about the injustices committed against his people.

Finally, in 1885, the Nimiipuu were allowed to return to reservations in Idaho and Washington, but not to eastern Oregon. Heinmot Tooyalakekt visited, but never again lived in, the Wallowa Valley.

Heinmot Tooyalakekt, Chief Joseph, died in his home on the Colville Reservation on September 21, 1904. His grave, marked by a large monument, is in Nespelem on the reservation.

According to the Architect of the U.S. Capitol: National Statuary Hall, located south of the Rotunda, was the meeting place of the U.S. House of Representatives from 1807 to 1857.

In 1864, in accordance with legislation sponsored by Rep. Justin Morrill of Vermont, Congress invited each state to contribute two statues of prominent citizens for permanent display in the room, which was renamed National Statuary Hall. The first statue was placed in 1870.

“Today, National Statuary Hall is one of the most popular rooms in the U.S. Capitol Building,” according to the Architect’s website, “It is visited by thousands of tourists each day and continues to be used for ceremonial occasions. Special events held in the room include activities honoring foreign dignitaries and presidential luncheons.”