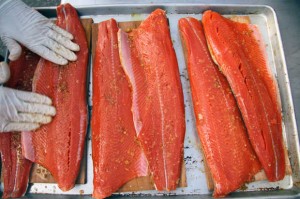 State officials may increase the average amount of fish, such as this sockeye salmon, each person eats per day. Raising that number would mean more stringent controls on pollution, because if people are eating more fish, they could be consuming more toxins.
THE BELLINGHAM HERALD

On Monday, March 23, the council will discuss signing a letter to the Department of Ecology that would request tighter water quality standards than what the department is currently proposing as part of a years-long update process.

That would go against the grain of many other cities around the state that support the plan from Ecology and Gov. Jay Inslee as a compromise on health standards and strict pollution guidelines that affect wastewater treatment plants.

Raising that number would mean more stringent controls on pollution, because if people are eating more fish, they could be consuming more toxins.

Under the proposal, Ecology also would lower the acceptable risk of getting cancer from the current rate of one in 1 million if someone were to eat the average amount every day for 70 years, to one in 100,000 for many of the toxins.

Those two measures fall under the umbrella of what are called human health criteria, which dictate exactly how much pollution is allowed into the state’s waterways. The current levels were set in a 1992 federal rule applying to 14 states that had failed to meet the requirements of the 1972 Clean Water Act.

For some, including Bellingham City Council members Roxanne Murphy and Michael Lilliquist, lowering the cancer risk rate seems like taking a step backwards.

“Primarily my concern is that Native Americans and Asian communities, for example, can often consume 10 times the amount of seafood that other communities might take in,” Murphy said. “I really want to bring light to how a higher cancer risk will affect everybody. I don’t think it’s the right approach for everybody’s well being.”

Lilliquist said the state shouldn’t downsize the cancer guidelines currently in place, even though it might cost more.

“There’s been some resistance to tighten the rules from city governments,” Lilliquist said. “No one’s against clean water, but if we have to redo all of our stormwater drains, prevent more water pollution, it would be quite expensive. My hope is that state officials will see that strong water quality standards are not up for debate.”

Even with lowering the cancer risk tenfold, the new standards would be more protective for about 70 percent of toxins, and in cases where it would be less protective, the state will maintain the stricter standard, as explained in a policy brief from the governor’s office.

Still, increasing the acceptable risk rate above the current one in 1 million is shocking to Dr. Frank James, medical officer for the Nooksack Indian Tribe, health officer for San Juan County and an assistant professor of public health at University of Washington.

“I think if the public understood, maybe they wouldn’t agree that that’s a good idea,” James said. “It’s the most common standard in federal regulation and in all state regulation. Us varying from that is a very odd thing.”

Council will consider signing its letter and submitting it on the last day Ecology is  taking public comment on the proposed rule.

A draft of the letter states that the council is in support of the governor’s comprehensive approach to improving water quality, but there are concerns about loosening the allowable cancer risk rate.

The letter also states that Bellingham council is aware that stronger standards will make it harder for the city to comply with pollution and stormwater controls, and that serious conversations about financial assistance are needed at the state level.

Those concerns are part of the reason the Association of Washington Cities, a nonprofit that lobbies for Washington cities and towns at the state level, supports the compromise presented by the governor.

Carl Schroeder, government relations advocate for the association, said it has looked at the issue and worked with the governor’s office and Ecology to set achievable goals.

The concern for some toxins is that changing the standards to a rate lower than what is already found in the waters of the state would mean that anyone discharging into that water, such as a municipal wastewater treatment plant, would need to meet the “ultra low standard right at the end of the pipe,” Schroeder said. The technology doesn’t exist to meet some of those low rates, he said.

“If you put a new standard out there that ratchets it down, and there’s no technology to do it, you drive a bunch of expense and utility rates go through the roof to put on the newest technology that doesn’t even meet the standard,” Schroeder said. “That’s been addressed largely on this risk rate discussion, which does increase the protections for 70 percent of the toxins. It doesn’t roll anything back, it just moderates the stringency.”