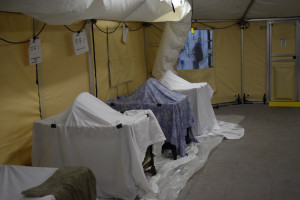 State Fish and Wildlife Biologist Brian McDonald is careful not to raise his voice as he approaches a row of baby cribs in a warehouse in Pasco, Washington. Each one holds mallard ducks.

The ducks were hit by an oil spill in Sunnyside earlier this month. McDonald says oil coats the ducks’ feathers and breaks down their natural waterproofing, “so each time they go into the water, it’s like a scuba diver going in without a wetsuit.”

Though they don’t always make headlines, 95 percent of oil spills in the U.S. are relatively small — less than the size of a tanker truck you might see on the highway. Washington State’s Department of Ecology responds to about 400 oil spills a year, nearly all of them a few thousand gallons or less.

Jeff Lewis, who leads the department’s spill cleanup in central Washington, says: “Early on, it’s usually a lot of detective work. In this case, it wasn’t intuitive where this thing came from.”

With spills to running water like the one in Sunnyside, he says, “they had to find the most upstream pipe they could see that was producing oil, and start narrowing your search.”

Lewis says responders looking for the source of the Sunnyside spill eventually traced the oil over 24 miles of moving water, from the Yakima River through a network of irrigation ditches. The culprit was a single storage tank on an old feedlot. Cleanup took as many as 50 people working 11 days straight.

“Even though 2-3,000 gallons of oil may not seem like a lot where it’s in aggregate form, in a tank, when it spreads out over the water, it can get into the weeds, into the cattails,” Lewis says. That makes cleanup a much more complicated undertaking.

All told, the U.S. spends almost $3 billion annually cleaning up spills on lakes, rivers, and streams. That’s the equivalent of one Exxon Valdez cleanupevery single year.

It’s too soon to say exactly how the Sunnyside spill began, but corrosion and punctures are the most common cause. So-called “structural failures” account for one out of every four inland spills.

“The oil industry in the U.S. has been around 120 + years,” observes geologist Ed Owens. “There are pipelines laid down, which, in some areas, are long since abandoned.”

In rural areas, used motor oil like the stuff in Sunnyside was long used to keep dust down on dirt roads. Everywhere there’s oil, there are tanks or pipes to hold it: everything from farms and gas stations to backup generators.

Since a lot of this infrastructure is underground, Owens says leaks often go unnoticed until it’s too late, as happened with a spill discovered beneath New York City’s JFK airport in the 1990s.

“Thousands of gallons of jet fuel had been spilled over the years,” Owens says, “and only when some of that leaked into a small creek, and it was decided to better look at this, they discovered the problem was really quite huge.”

Over time, the EPA has strengthened regulations on facilities used to store and transport oil. Spills today are just a quarter of what they were in the 1970s.

But those regulations don’t cover everything. “There’s bound to be old tanks out there that predate the regulations,” Owens says. “They’ve never had to fit into the system, because either they went out of use—that doesn’t mean to say they were empty—” or, at a few thousand gallons, they’re small enough that no special permit is required.

The EPA says it didn’t know about the Sunnyside tank until after the spill. And when the agency does do inspections, it finds leaks more than half the time.