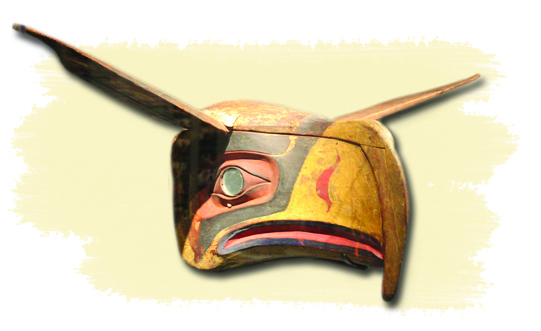 The mask in on display at Seattle’s Burke Museum through July 27, 2015.
Photo/Micheal Rios

Everyone in the Pacific Northwest is a Seattle Seahawks fan these days. And why shouldn’t they be? The Seahawks (11-5) took the NFL by surprise in 2012 with their rookie quarterback Russell Wilson, beating Washington in the Wild Card Playoffs, and narrowly losing to Atlanta on a last second field goal. In 2013, the Seahawks (13-3) rampaged through the NFL enroute to a dominating Super Bowl Championship over Denver. The 2014 Seahawks (12-4), again finishing as the #1 seed in the NFC, made it back to the Super Bowl after the miracle comeback against Green Bay. In the Super Bowl, Seattle coach Pete Carrol unleashed the beast Marshawn Lynch on 2nd and goal from the 1 yard line….oh, wait. Well, we all know what happened. But do you know the origin of the Seahawk’s logo?

In case you weren’t aware, there is actually no such thing as a seahawk. Ornithology experts, people who study birds, theorize the term ‘seahawk’ refers to a combination of an osprey, which is a bird of prey native to coastal North America, and a skua, which in our area we normally call a seagull. So if there isn’t an actual ‘seahawk’ found in nature, then where did the inspiration for the Seattle Seahawks’ logo come from?

The general consensus is that in 1976 the NFL commissioned a logo for the newly-formed Seattle Seahawks. The designers were inspired by Northwest Coastal art, specifically something known as a Kwakwaka’wakw (pronounced: KWA-kwuh-kyuh-wakw), also called a transformation mask depicting an eagle in its closed form with a human face inside. They found an image of this mask published in Robert Inverarity’s Art of the Northwest Coast Indians.

According to curators at the Burke Museum, long before the Seahawks took the field at the old Kingdome, this mask played an important role among the Kwakwaka’wakw of Vancouver Island. Transformation masks like this one represented rights owned by individual chiefs, often depicting origin stories of an individual family or an ancestor’s super-natural encounters. When this mask is danced in ceremony, a pivotal moment in the song calls for the mask to be opened, revealing the face of a man inside.

Carved in the late 19th century, the mask was purchased by Fred Harvey Company before 1910 and later came into the collection of Max Ernst. Ernst, Picasso, and other Surrealist artists were fascinated by the aesthetic power of Northwest Coast masks, which they saw as direct expressions of human instinct and unconscious thought. After Ernst’s death in 1976, the mask was acquired by a private collector, William P. Palmer III. Eventually the Palmer collection came to be displayed in Maine’s Hudson Museum in 1982.

The mask had been on exhibit in past years, but had always been shown in the open position, so its similarity to the Seahawks logo was concealed. It wasn’t until early 2014 that the mask’s whereabouts even came to the attention of Seattle’s Burke Museum, located on the University of Washington campus. In September 2014, the Burke launched an online fundraising campaign to bring the mask to Seattle. It didn’t take long to raise the money needed to conserve, insure and ship the mask across the country. Today, the mask is on loan to the Burke Museum as part of its newest exhibit, “Here & Now: Native Artists Inspired”. You can see the mask that inspired the original Seahawks logo while it’s on display through July 27, 2015.

A little more about the Seahawks mask, as explained in a Burke Museum news release:

Scuffs and scratches on the mask show it was used in ceremonies before it was sold. … A dancer would enter the longhouse, hunched low with the mask on his back, firelight reflecting in the mask’s mirrored eyes. As the drum beat grew stronger, the dancer would spin rapidly, whipping open the mask to reveal the face inside. The face represents the eagle — or Thunderbird — coming to earth to take human form.

A tag in the mask dated 1910 includes a catalog number from the Fred Harvey Company, which operated hotels, restaurants and Indian marketplaces throughout the southwestern U.S. in the late 19th and early 20th centuries. The company’s collectors traveled throughout the southwest, California and along the Colorado River buying art for the marketplaces. They also collected objects from Plains and Alaskan tribes, which offers a possible explanation for how the mask came to be part of the company collection.

“We knew it was made on Vancouver Island in the 19th century, but we didn’t know anything else until it came into the Max Ernst collection,” said Kathryn Bunn-Marcuse, assistant director of the Burke Museum’s Bill Holm Center for the Study of Northwest Native Art. Ernst lived in Sedona, Arizona, in the 1940s — suggesting an opportunity for his acquisition of the mask. “Now we are filling in the gaps in the mask’s history.”