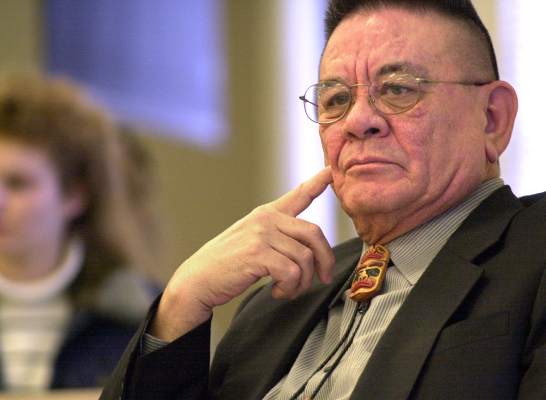 FILE — In this Jan. 26, 2004, file photo, Rep. John McCoy, D-Tulalip, listens to testimony in Olympia, Wash. Washington tribes and the countrys largest American Indian organization say when a state agency recently stopped running criminal background checks for emergency child placement situations, they put children at risk. The groups are urging officials to reinstate the background check process or let tribes have access to the national database for these emergency situations. McCoy, a state Democrat who represents the Tulalip district, said the dispute is yet another problem tribes are having with access to the National Instant Criminal Background Check System, administered by the Federal Bureau of Investigation. (AP Photo/Louie Balukoff, File)

SEATTLE — Washington tribes and the country’s largest group representing Native Americans are asking for state and federal help in getting background checks when a tribe needs to place a child with a foster parent in an emergency situation.

The state’s Children’s Administration, a division of the Department of Social and Health Services, had conducted the criminal background checks for the tribes for years. But Jennifer Strus, the agency’s assistant secretary, sent a letter to the tribes in June saying that service would no longer be provided effective July 1, 2014.

Following a parent’s arrest, injury or unexpected death, background checks would be conducted before a social worker placed a child in a foster home, said Robert Calkins, spokesman for the Washington State Patrol.

Strus told staff in a letter acquired by The Associated Press that the State Patrol informed the Children’s Administration that it was not authorized to provide the information to the tribes, and federal law prohibits the agency from providing the background checks.

“Therefore, Children’s Administration staff must not share the Record of Arrests and Prosecutions, RAP sheet, verbally or in writing (email) with any external entity,” she said.

Sen. John McCoy, a Democrat and a member of the Tulalip Tribes, said child placement is just one area in which the tribes are hampered by a lack of access to the National Instant Criminal Background Check System, administered by the FBI.

Another problem area was revealed after a high school student used his father’s gun to kill four friends and himself at Marysville-Pilchuck High School last year.

The father, Raymond Lee Fryberg Jr., was later arrested for illegally possessing a firearm. Fryberg was the subject of a domestic violence protection order issued by a tribal court, which should have caused him to fail a background check during a gun purchase. But the order was never entered into the criminal database, as it would have been if issued by a state court. He pleaded not guilty Thursday to the federal firearms charge.

The U.S. Department of Justice has announced it would host a meeting with tribes in August to try to fix that problem.

However, the emergency child placement problem is a reverse of that issue. Instead of not being able to enter orders into the database, tribes are not allowed to access information to make sure a person who is taking a child in an emergency situation does not have a criminal history involving children or domestic violence.

McCoy said both problems need to be fixed.

“I’ve been in communication with folks to try to resolve this for years,” McCoy said.

John Dossett, general counsel for the National Congress of American Indians, agreed, saying the federal criminal database system is a cooperative between the FBI and the states.

“It’s a national network, but it’s been hard for individual tribes to participate,” he said.

Calkins said the State Patrol discovered that the department was providing background checks for tribes when his agency conducted a routine audit. Since Washington law says only the state social and health services department can run criminal background checks for emergency child placements, the Children’s Administration was told to stop giving data to tribes.

However, tribal police can do the checks, Calkins said.

“We’re disappointed someone would imply that we had cut off tribal access to criminal history information without making clear that this is a very narrow limitation related to emergency child placement only,” Calkins said.

But Dossett said tribal police aren’t allowed access to the database for civil purposes, like the emergency child placement background checks. That information is critical when a child is transferred to foster care, he said.

The FBI allows states to define who has access to the data, and in Washington’s case, state statute restricts access to the “department,” which is the Children’s Administration, he said.

The Tulalip Tribes of Washington passed a resolution in March asking state officials to add new language to the statue that would allow “an authorized agency of a federally recognized tribe” to request a federal criminal history record check.

The National Congress of American Indians went further in an October resolution.

It asked U.S. Attorney General Eric Holder to direct the Justice Department to work with the tribes to provide full access. It also asked the FBI to work with tribes “to encourage the state of Washington and other states to modify their statutes and regulations” to include direct access to the databases by the tribes.”

Without access, the resolution said, serious consequences could result “to a tribe’s most vulnerable population, its children.”