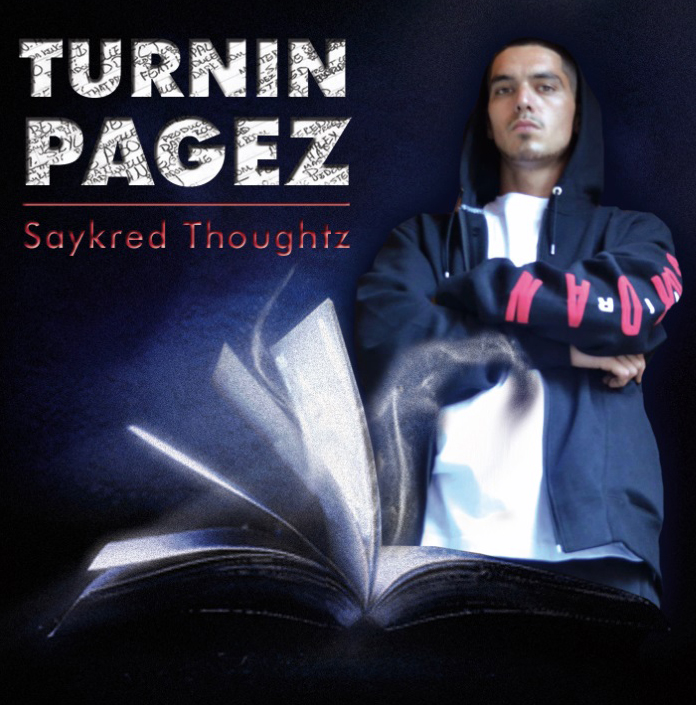 Saykred Thoughtz is a product of Derek Prather. Derek Prather is a product of Tulalip. Therefore it isn’t so much a matter of simple logic, but homegrown necessity when Saykred emphatically states, “I do it for the rez!” on the chorus of his most popular YouTube music video The Rez.

Prather, who’s music stage name is Saykred Thoughtz, is a twenty-four year old American hip hop artist born and raised within the boundaries of the Tulalip Reservation. He is an enrolled tribal member, while also being a member of the hip hop group Native Instinct with his cousins Komplex Kai (Kisar Jones-Fryberg) and Hapalo (Chuckie Jones). Most importantly, he is a proud father of four beautiful children, Tessa, Kaden, Maia and recent addition Alissa Mae. “I love my kids more than anything in the world. They are my inspiration to do better at everything,” says Prather. 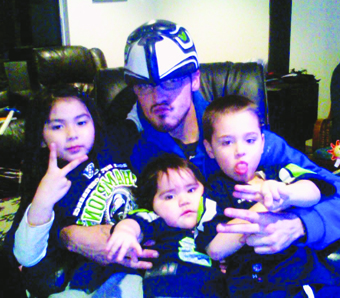 Prather with his children, Tessa, Kaden and Maia.
Photo courtesy of Saykred Thoughtz

It is often the case that those who grow up on Native American reservations are exposed to much of what the outside world only experiences indirectly, through mediums like television or literature. For Prather it started when he was born submerged in poverty and the beda?chelh system, continuing into his teenage years when he was ditching school and committing juvenile crimes, and peaking when he found himself as a father dealing with domestic disputes in a co-destructive relationship, all the while battling the nightmare that is addiction.

Prather hit rock bottom three years ago when being on the losing side of his battle with addiction, self-medicating with prescription medication and alcohol, ultimately led to him having his children taken from his custody. It was at that moment that Prather made the choice to better his life, both for himself and his children, once and for all. He voluntarily went to treatment at Valley General to get clean and has remained clean for nearly three years now. He came out of treatment with a renewed sense of purpose as a man and father. Prather got his job back in Tulalip Construction Housing as a laborer, got a house and car, everything your supposed to have as the man of a household. It didn’t take long for him to have his custody case dropped and be reunited with his children.

“Battling my demon of addiction was the hardest thing that I’ve had to do. You go through struggles emotionally when learning how to be a man in life and taking care of your own,” says Prather. “For me, my kids are everything. They were my reason to get clean. Being a father to them every day, seeing their smiling faces every day is what keeps me going. They are my inspiration and motivation to be the best father and man that I can be.”

The renewed sense of purpose that came from getting clean was compounded when he regained custody of children. Prather realized his dream of being clean and having his kids back had come true. If he could overcome such trying tribulations as those then he could do anything he put his mind to. Prather chose to go all in on the dream of becoming a successful music artist.

“I realized music had always been there. During my highest of highs and my lowest of lows, music was always with me. Since I was a little kid I’ve always been intrigued by music. I started in guitar lessons and piano lessons as a kid and from that point I learned to love and appreciate music in all its forms,” Prather says while reminiscing about how he fell in love with music as an art form. “It evolved from there. In sixth grade I was playing the drums and just trying to be in some kind of music. Then when I was thirteen, my older cousin Komplex Kai created his first rap album. I was able to witness that whole process from beginning to end. That intrigued me to start writing and soon after I started going to Kai’s studio and never stopped. 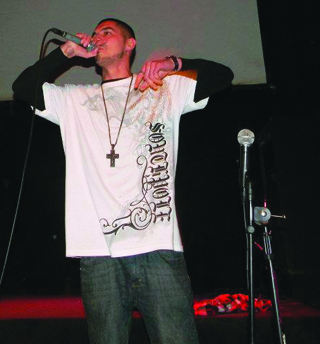 “Every life experience inspires an artist. Everything that you go through that pisses you off or makes you happy or turns you around is supposed to make an artist think differently about his music. Everything that happened to me and that I went through, afterwards I chose to go home and write about it. My music tells my story. If you were to go back and listen to all my music from when I first began to now, it would be like listening to an audio book of all the stages of my life. From my dad going in and out of prison, to my mom doing stupid stuff, and me being taken away from my parents and getting arrested about something dumb. I would write about all that until I learned how to turn those words on paper into musical inspiration. I made it relatable, so that someone going through those same experience can hear my music and know I’m real, that I actually went through the same things they are.”

In 2013, Prather started working on his first professionally produced and mastered hip hop album, titled Turnin Pagez that will be released Friday, May 1. He invested in himself, spending every spare dollar he had on studio time at Dark Room Productions, a local independent studio in Everett. Paying between $50-$100/hour to make music at the highest possible quality is what separates the professional from the amateur.

“It’s easy for people to make music from their house, but it shows how serious you are as an artist when you’re willing to pay for studio time and leasing rights,” Prather explains. “As an artist, it’s exciting to say that I have leasing rights to everything on my upcoming album. That’s a hard thing to achieve for independents. Because I’m not signed to a label that makes me an independent artist, so I’ve learned how to independently market my music and myself. Showing people how serious I am as an artist paves the way and opens doors.”

The upcoming release of the album Turnin Pagez has multiple meanings for Prather. First, it shows what is possible with a dollar and dream. Second, this project has been two years in the making, it’s been so much of an investment, financially and emotionally, and most importantly it demonstrates the personal growth that Prather has gone through.

“There’s a lot of truth to this album, a lot of things that I’ve went through personally and saw firsthand coming up,” explains Prather. “There’s a song on there about the way a person that’s battling addiction thinks of the world and sees the world. How that person thinks about people seeing them at their worst, how people think about them. Basically, it’s putting myself in a perspective of a person that’s at rock bottom and has nothing. I’ve been there, I know what rock bottom looks like, but I’ve also made it through.

“This album is special. I tried my hardest to push myself out of my comfort zone to make every different kind of music that I can create in order to broaden my audience. Any person who likes hip hop just a little bit will find a few tracks they’ll really enjoy. It has a song for everyone basically. There’s a lot of culture in it, too. Anyone from Tulalip, anyone from Indian country who has grown up on a reservation will be able to relate to this album.”

Turnin Pagez is a collection of Prather’s thoughts obsessively turned over and milled into substance, and that is its strongest point. He captures the struggle of addiction so concisely. A former product of that, Prather delivers an album that pushes aside all his many past battles. The psycho-analysis is public, it’s honest and it’s executed through the best writing and rapping of his career.

“I called the album Turnin Pagez because I have filled so many notebooks with lyrics, rhymes, and my thoughts. When I flip through those notebooks I’ve realized it’s symbolic. This album, for me, means I’m turning a different direction in life. I’m turning to a new chapter in life. From the things I talk about in this album, like my battle with addiction and domestic issues that I went through in the past four years, I’m turning the page and moving on to a healthy and brighter future for me and my kids. This album symbolizes that.”

Regardless of where his career in the hip hop industry takes him, Prather has enjoyed the journey and looks forward to what the future has to offer. Even though he has lofty expectations for himself as a hip hop artist, Prather says he owes everything to his cousins, Komplex Kai and Hapalo, and the Tulalip community for bringing him up in the hip hop game. “They are what got me to where I am at today with my music. Our studio was at aunt Uppy’s house. It was like our crew studio; every day and every night we were there making music. It was cool though man, it was a good environment to grow up in with our music.

“I’ve come a long way since those early days of aunt Uppy’s music sessions. The basics of the hip hop business is shaking hands and meeting people and showing people that you are serious about your craft. I was determined to show everyone how serious I was. I was fortunate to land D-Sane, who ended up mastering my album. He mastered a lot of music for Macklemore, so that’s a really big deal for me to have someone on his level be a part of my album. Plus, he got me a Crooked-I feature on my album. He’s a huge West Cost hip hop artist and to have him on my album is so amazing.”

His battle to overcome life’s trials, however righteous, has now translated musically. Fans of Prather’s music will be able to identify with his wounds, hurts and unpleasantries. From a personal vacation from stress, to the remorseful father who once lost his children, to past beefs with his girl, Prather unleashes his truth with no filter. While this is an exciting, polished album, Turnin Pagez accompanying music marks Prather’s independent arrival. He has released a candid and thought provoking piece of work. It’s something that many will find refreshing.

Prather’s album, or more accurately Saykred Thoughtz album Turnin Pagez comes out Friday, May 1. To commemorate his achievement there will be an album release concert held at Tony Vs Garage on Hewitt Ave in Everett on May 1. Doors open at 9:00 p.m. and admission is free, with a $5 voluntary donation being accepted to support the artists. Local fans will see Tulalip rappers Komplex Kai and Hapalo open the show before Prather performs the entire Turnin Pagez album.

Hard copies of the Turnin Pagez will be available for only $10 beginning May 1 at Priest Point Grocery (aka Chris’s Store) in Tulalip. For the digitally inclined, the Turnin Pagez album will be online at the iTunes store, Amazon, CD Baby, and SoundCloud websites the following week.

You can sample some of Saykred Thoughtz music on youtube: