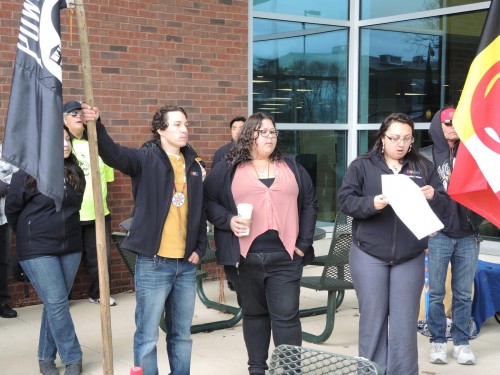 The Native American Student Organization at Eastern Michigan University held a rally Wednesday, April 22, in reaction to a report some students dressed in Native American garb and painted their faces red during an off-campus party. BEN BAIRD-WASHTENAW NOW

By Ben Baird, The Ypsilanti Courier

YPSILANTI — In response to an April 11 off-campus party where Eastern Michigan students allegedly dressed in Native American garb and painted their faces red, a university student organization took a public stand Wednesday saying they will not accept silence or for this to be swept under the rug.

Amber Morseau, president of EMU’s Native American Student Organization, said they were rallying that day to stand in unity against racism of Native Americans both on and off campus.

“These students involved decided that our culture was a costume they could just put on for a few hours and take off again when it suited them,” she said. “(They) claimed they were Hurons and honoring our people.”

There was no honor in what they did, Morseau said.

NASO members made clear they are not satisfied with the university administration’s response so far, both in regards to the students in red face as well as the reappearance of the Hurons logo on campus. The Hurons mascot was eliminated more than 20 years ago after a campus-wide effort was begun by four Native American women who found it disrespectful.

Davi Trusty, who was the president of NASO in 1991 when he attended EMU, said he feels it’s a shame Native American students are still fighting the same issues that he fought.

If someone thinks it’s okay to tell a Native American to go back to the reservation or to put makeup on their face and pretend to be an “Indian” something is wrong in that person’s psyche, he said.

Trusty said they appreciate the love and support members of the community have shown following this incident.

Morseau said Kay McGowan, an adjunct professor at EMU who teaches anthropology and sociology classes, spoke to each of her classes April 15 about racism, disrespect toward women and the culture of erasure – of a dominant culture diminishing another.

McGowan, the only Native American professor on campus, subsequently received an email from someone identifying himself as “John Smith” who told her no harm was intended by what happened April 11 and that the Native American community was overreacting.

“This email alone demonstrates to us that these students involved do not understand what it is they have done and they certainly have yet to see the consequences deserved for what we consider to be a hate crime,” Morseau said.

What happened was not a spontaneous action, McGowan said, for such a large group to all be dressed and painted at once. This was planned and done on purpose, she said.

“I want to know why, who did it and what was their intent,” she said. “Along with an apology.”

Sandy Norton, EMU Faculty Senate president, said the university’s faculty is dedicated to the education of their students. This is an opportunity for the students who did this to grow and realize domination is not okay regardless of what group someone is from, she said.

“This is not an isolated incident as you well know, this is simply another manifestation of people who are in a position of privilege and dominance appropriating another culture, representing something in a way that’s destructive and damaging,” she said. “And the issue? They don’t even realize that they’re doing it, that’s what’s scary.”

EMU faculty’s job is to get them into classrooms, meeting other people, talking to other people, and asking themselves questions so they can grow, Norton said.

NASO speakers are asking the students responsible to come forward with a public apology.

Morseau said they are all aware of the incident from April 11 when as many as 20 EMU students in red face, dressed up wearing things like headdresses and portraying the mainstream stereotype of Native Americans, attended an off-campus party.

Nathan Philips, a resident of Ypsilanti, Omaha Nation member and native elder, was walking in the neighborhood when he encountered these students on Ballard Street.

When he asked what they were doing, he said some of the students responded by saying, “We’re the F-ing Hurons!”

Phillips told the students they weren’t honoring Native Americans, but were being racist and offensive.

“And as soon as I said ‘racist,’ it turned from honoring the Indians to, ‘Go back to the reservation, you F-ing Indian, get the F out of here,'” Phillips told 7 Action News.

He also said a beer can was thrown at him.

Phillips attended Wednesday’s rally, during which he made a point to go through the entire crowd of those assembled, taking the hand one-by-one of everyone he approached.

Phillips is also a Vietnam veteran and by May 2013 he completed 500 miles of walking while carrying a POW/MIA flag in honor of fellow veterans. During the rally, Phillip’s flag was carried by Chris Sutton, NASO treasurer.

While Morseau thanked the EMU administration for acknowledging what happened and for both the university and police conducting an investigation, they don’t believe the inciting behavior is being addressed as well as it should be. She said they feel the university’s carefully worded response sent out to students and faculty on April 17 had the effect of minimizing the situation.

“We, as a Native American student organization, feel that the racist attitudes and behaviors that led to the assault are a much bigger problem than the university would like to admit,” she said.

Sutton said the university’s response is kind of what led to the rally – as a way to offer more details to the public.

They expect more from the university, Morseau said, that evidence of pervasive racism be met with a renewed commitment to honor the promises of respect the native community received, including the removal of the Hurons logo throughout campus.

It’s also not just a problem for Native Americans, but for all marginalized communities, Morseau said.

If there are those who feel they can discriminate against Native Americans, Trusty said it’s only a matter of time before other groups of people are targeted.

EMU has said it immediately began an investigation after hearing about what happened April 11.

“Eastern Michigan University takes these matters very seriously and remains strongly committed to maintaining a respectful, inclusive and safe environment, in which acts that seek to inflict physical, psychological or emotional harm on specific demographic groups will not be tolerated,” said Geoff Larcom, EMU’s director of media relations, in a statement.

Austen Smith contributed to this report