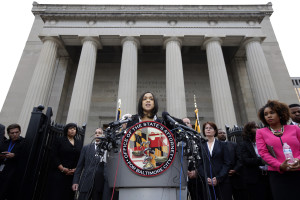 The Baltimore Police Department’s report on the death of Freddie Gray is now being examined by the city’s top prosecutor. The findings aren’t public; police revealed only a few new details when they announced the transition in the case Thursday. Baltimore’s curfew is expected to remain in effect through this weekend.

Gray died on March 19, one week after being taken into custody; police have said that during his transport, Gray wasn’t buckled in properly and did not receive timely medical care. Six police officers remain suspended over the case.

As Sam reported for the Two-Way, when police turned over the documents to State’s Attorney Marilyn Mosby in Baltimore, they announced that “the van transporting Freddie Gray, the 25-year-old black man who suffered a serious spine injury while in police custody and later died, made one more stop than previously thought.”

The roughly 40 minutes that Gray spent in the van have emerged as the focal point in the inquiry over how he sustained an injury that would later be blamed for his death.

That extra stop was discovered through a review of recordings made by security and private cameras, Deputy Police Commissioner Kevin Davis said. He added that another detainee who was riding in the van told police that Gray was “still moving around … kicking and making noises” until the van reached the police station.

That second detainee rode in the police van on the other side of a metal partition that divides its cargo space. When he was picked up, Gray was already in the van.

Local news WJZ-TV reports that Donta Allen, 22, was that second man – and that he came forward Thursday out of concern over how his comments were being portrayed by both the police and the media.

“When I was in the back of that van it did not stop or nothing. All it did was go straight to the station, but I heard a little banging, like he was banging his head,” Allen said. ” I didn’t even know he was in the van until we got to the station.”

Saying his words have been distorted by recent reports and that he doesn’t think Gray hurt himself intentionally, Allen also told a WJZ reporter, “The only reason I’m doing this is because they put my name in a bad state.”

Allen, who was reportedly taken into custody for a minor offense and was not charged with a crime, also spoke to WBAL TV. He told the station that when he got into the van, he didn’t know Gray was already there. He said he heard “a little banging for like four seconds.”

WBAL aired surveillance camera footage that shows officers looking into Gray’s side of the van during the stop that also picked up Allen.

When the van arrived at the police station, Allen said he heard the officers say that Gray didn’t have a pulse and was unresponsive — and that another officer later said, “He’s got vitals now, he must’ve come back.”

The sequence of events has led to wide-ranging questions over what happened: Was the van driven in a way that caused Gray’s injury? When did he become unresponsive? Were the sounds Allen heard caused by a seizure experienced by a gravely wounded man?

The Baltimore Sun reports: “Maryland’s chief medical examiner, Dr. David R. Fowler, said his office has not completed an autopsy or turned any documents over to police or prosecutors. He said homicide detectives had observed the examination, a routine practice.”

When it’s complete, Fowler’s report will go straight to the state’s attorney’s office, the newspaper says.

Protesters have been calling on police to reveal more information about the case. Thursday was the third night of Baltimore’s 10 p.m. curfew; before that time arrived, crowds of demonstrators marched in the city’s downtown, among a large police presence.

According to the AP, here’s what protesters were chanting last night: