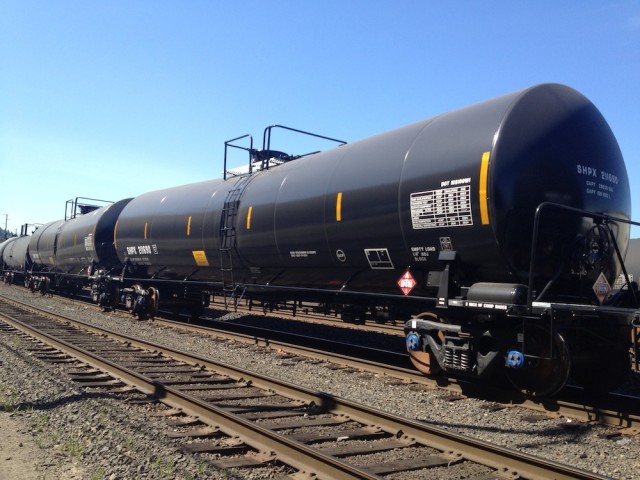 Federal transportation regulators in the U.S. and Canada released a sweeping set of final rules Friday with more stringent requirements for railroads hauling flammable liquids, including crude oil and ethanol. The rules come one day after Oregon Sens. Ron Wyden and Jeff Merkley and four of their Democratic colleagues introduced a wide-ranging bill intended to bolster oil train safety including a fee on oil shipments made in old, puncture-prone tank cars.

“It’s a meaningful step but it doesn’t do enough,” Wyden said Friday of the federal rule. “It doesn’t move quickly enough to secure Oregon communities from the risk of flammable oil trains.”

The Department of Transportation rules would require new electronic brake systems for all trains carrying flammable liquids at speeds above 30 miles per hours by the year 2021. Current air brake technology is nearly a century old. The brake system has been involved in a number of derailments, including the deadly explosion in Lac Megantic in 2013 that set off widespread concern about oil by rail.

Aerial view of charred freight train in Lac-Megantic, Quebec, Canada. The photo was taken the day after the train of crude oil derailed in 2013. It claimed 47 lives. Transportation Safety Board of Canada

Air brakes have also been cited in several whistleblower complaints against railroads, in which workers claim they were pressured to skip or shorten brake tests to keep trains moving on time.

Oil trains would have new speed limits of 50 miles per hour — 40 mph in densely populated areas — and a thorough analysis of routing based on security and safety risks. Oil trains currently move through populated areas in the Northwest like downtown Spokane and Seattle.

Friday’s rules call for a decade-long phase-out of old tank cars, which have been known since 1991 to be puncture-prone. The initial replacement for those cars has increased shielding to protect against punctures, but has also been called inadequate by the National Transportation Safety Board after these newer-model tankers, were involved in a string of fiery derailments. Under the rules, these flawed models would undergo a gradual phase out until 2025.

Many of these requirements are expected to carry significant costs to railroads. BNSF Railway currently hauls more oil by rail through the Northwest than any other railroad. The railroad supports instituting a new generation of tank cars, but indicated in its response to the new rules a resistance to costly upgrades.

“Any regulatory changes that automatically take away capacity will have a devastating impact on our shippers and the economy,” BNSF spokesman Michael Trevino wrote in an email. “Most importantly, capacity is not abundant. The supply chain’s experiences with the recent disruptions at the West Coast ports is clear evidence of the negative impacts substantially reduced capacity will have on the economy.”

Oil-by-rail barely existed a few years ago. But booming North American oil production outpaced pipeline capacity and railroads offered greater flexibility and new markets for energy producers. As many as 17 oil trains per week move through parts of the Northwest, carrying crude from North Dakota, Canada and Utah to refineries and marine terminals in Oregon and Washington. Several other crude-by-rail facilities have been proposed.

Environmentalists, rail workers and safety experts called the rule a positive step, but each pointed out what they think are significant safety gaps.

Jared Margolis, a lawyer with the Center for Biological Diversity, said he thinks the speed limits are too high and the phase-out of old tank cars too dragged out.

The Center for Biological Diversity has previously sued to prevent oil trains in older tank cars from moving through parts of the Northwest, like the Columbia River Gorge.

“We’ll continue to see derailments and spills even with these new rules in place,” Margolis said.

George Gavalla, a railroad safety consultant with 37 years in the industry, including seven as former head of the FRA safety office, called the new rules “a significant improvement,” particularly for requiring improved tank car designs.

“They also put forth an aggressive, yet reasonable timetable for retrofitting (or replacing) the existing tank car fleet,” Gavalla wrote in an email. “At first blush, the tank car standards appear to go a long way toward improving the tank car safety.”

But, he added, “a big issue that the rule does not address is the volatility of the crude oil, especially the Bakken crude oil.”

Herb Krohn, legislative director for the United Transportation Union in Washington, said the rule appears to be a positive development but it ignores what he calls the “larger issue of monitoring the movement of Haz-Mat trains including adequate crewing.”

Krohn’s union has been pushing for shorter trains and minimum mandatory crew sizes, opposing a railroad movement toward one-man crews.

“The railroad carriers strongly oppose any government regulation regarding train crew size and placement;  this is clear from the complete absence of any mention of this critical safety issue,” Krohn said Friday. “The omission of this issue leaves a huge gap in public safety.”