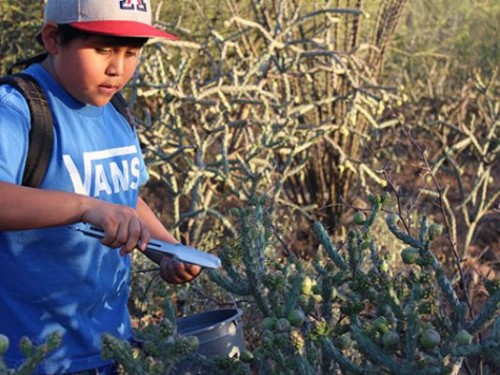 Before Arizona became known for its cotton and citrus, before farmers moved West, before Spanish explorers first set their eyes on the Grand Canyon, the Tohono O’odham were cultivating the land and using the Southwest’s natural food sources to survive.

For hundreds of years, their diet consisted of wild foods straight from the Sonoran Desert such as mesquite bean pods, cholla buds and prickly pear fruit. The Tohono O’odham were also adept farmers, growing enough desert-hardy crops, like tepary beans and 60-day corn, that they were completely food self-sufficient up until the mid-20th century.

International turmoil and government programs in the mid-1900s pulled many Native Americans away from their homes and introduced processed foods to the reservations, which in turn led to the near disappearance of their traditional food sources.

The loss of their native foods also resulted in a startling rise of obesity, and consequently diabetes, among Native American tribes, including the Tohono O’odham.

According to the U.S. Department of Health and Human Services, American Indian adults are twice as likely to be diagnosed with Type 2 diabetes when compared to non-Hispanic Whites.

However, the real victims are young Native Americans, specifically those between the ages of 10 and 19, who are nine times more likely to be diagnosed with the disease. From 1990 to 2009, diabetes diagnoses rose 110 percent for that age group.

Recognizing the need for a community program in the Tohono O’odham Reservation to promote a healthy and culturally rich lifestyle, Terrol Dew Johnson founded Tohono O’odham Community Action, in 1992.

“Our whole intent was to have some kind of structured, positive program for youth and the community,” Johnson said. “I just wanted to have some sort organization that everybody could be a part of, regardless of age.”

Initially, TOCA was more of an after-school or summer program for students on the reservation. The community elders would take children out to the desert where they would teach them how to harvest wild plants, such as saguaro cactus fruit and cholla buds.

Over the years, Johnson’s non-profit has rapidly grown in both popularity and size. TOCA is now a multifaceted operation that includes the Desert Rain Cafe, a restaurant that specializes in native foods, Native Foodways Magazine, which highlights aspects of Native American cuisine and various comprehensive community initiatives that seek to make the Tohono O’odham more food self-sufficient.

“Food sovereignty is our buzz word right now,” Johnson said. “Our goal now is to make this tribe more self-sufficient with their food.”

These initiatives include theNew Generation of O’odham Farmers program, introduced in 2009, that provides young adults with the training and skills necessary to pursue a career in sustainable agriculture.

TOCA also works with teachers and students to develop and maintain school gardens. The gardens are meant to help the children develop a work ethic and an appreciation for healthy food said Johnson, who is trying to make the food they grow part of the school lunch program.

TOCA isn’t alone in its quest to revitalize crops that thrive in an arid climate.

Native Seeds/SEARCH, a Tucson-based seed conservation non-profit, has almost 2,000 varieties adapted to dry weather, many of which came from Southwest tribes such as the Tohono O’odham.

“We’re trying to take seeds that have been gathered over the years, many of which were used for centuries but are in danger of being lost, and grow them to increase their supply,” said Larrie Warren, Native Seeds’ executive director.

On the non-profit’s 60-acre farm near Patagonia, a rotating variety of plants are grown and their seeds harvested. Some of these harvested seeds make it back to the refrigerators and freezers at the non-profit’s headquarters. They are used to preserve much of the organization’s stock and are handedout through a free seed grant program.

Most of the distributed seeds go to schools or communities struggling with food-security issues, Warrensaid.

While some may question why food-insecure communities would seek out rarer, less-established crops as a potential food source, there are notable benefits to what Native Seeds/SEARCH provides.

“We try to promote diversity,” Warren said. “If you’re growing one crop in an area, you’re going to begin having pest problems, pollination issues and other complications.”

Native Seeds/SEARCH has roughly 500 varieties of corn, nearly 200 types of beans, and 1,300 other types of seeds, many of which are available to the public, stored in its facilities

All of these seeds, and those used by TOCA, come from desert-adapted plants that thrive with minimal water.

“Our core mission is to preserve these seeds for a sustainable future,” Warren said. “Now we’re trying to broaden that out and educate the community so more people understand the health and environmental benefits of these seeds.”

Native Seeds/SEARCH offers classes and training to students, teachers, Spanish-speakers and backyard gardeners through its website. It also has a store on Campbell Avenue south of East Fort Lowell Road where it sells a selection of hard-to-find seeds.