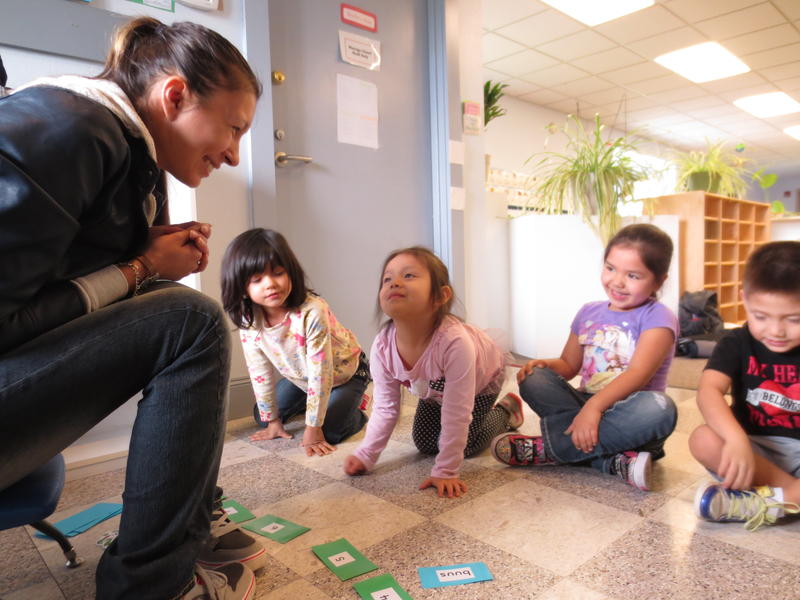 In Maria Martin’s preschool classroom at the Tulalip Montessori School, the children were learning to count to ten.

But this lesson wasn’t in English. “In Lushootseed!” Martin instructed her class.

“Saliʔ!” their tiny voices rang out.

Linguists estimate that by the end of the century, 80% of all world languages will fall out of use. Maria Martin is trying to prevent her language from vanishing.

Lushootseed is the language of many tribes in the Puget Sound region, including the Muckleshoot, Puyallup, and Duwamish. It’s been around for hundreds of years, but is  in danger of going extinct.

Only a few tribal leaders are fluent in Lushootseed. “You hear people saying how amazing it is that you can speak it, how they wish they could, but they don’t have time,” Martin explained.

One of Martin’s “worst fears” is that her language “dies out and nobody speaks it anymore. Because that’s a big part of who we are.” If the language is lost, according to Martin, “it just seems that much easier to lose everything else.”

“It’s Something To Be Celebrated”

When a language dies, more than just words stop being spoken. Stories stop being told. Songs stop being sung. Preserving cultural values and history is much harder without a way to share them.

If Lushootseed is going to survive, Martin believes it must carry on in the voices of youth. The Tulalip Montessori School offers classes in Lushootseed to children ages three though five. They learn to count, sing songs, and tell stories in the language. The lessons in Lushootseed provide a way for the kids to experience their cultural heritage, which they couldn’t find in most preschools.

Martin said the community’s response has been overwhelmingly positive. She sees parents post Facebook videos of their kids singing Lushootsheed songs, or saying Lushootseed words. “You see that pride in the parents. ‘Hey, my child knows this.’ It’s something to be celebrated.”

When Martin was a child, she attended the same school where she now teaches.  She hopes to be the inspiration that some of her teachers were to her.

“I was lucky enough to start out in Montessori and learn some Lushootseed, but after I left I didn’t get much exposure. It wasn’t offered in school anymore,” she explained. She said that much more work needs to be done.

The Tulalip tribes are working to train more teachers, and get language programs into higher levels of school.

But for Lushootseed to remain relevant, it must also adapt to the changing lifestyles of its speakers.

David Sienko is not a Native tribe member, but he’s been working with the Tulalip Tribes for the past decade. He’s a media developer in charge of all the technological aspects of the Tribes: managing the website, creating weather forecasts in Lushootseed, and anything that helps to reconcile the language with the technology of today.

“Technology has changed,” said Sienko. “So we have to create new words for modern life, and in doing so that’s going to help preserve the language.”

Sienko is confident that Lushootseed won’t go extinct any time soon. “All the Lushootseed-speaking tribes are really putting in a concerted effort, and they are starting to work together more readily,” he explained.

Ultimately, it is up to the next generation to keep Lushootseed alive. That’s why Maria Martin does her work.

“The kids inspire me to get up every day and come into work,” she said. “Next year they might go onto kindergarten and forget all about me. But for that little bit there was something there. Maybe they’ll have the chance to take away what I took away.”

RadioActive is KUOW’s program for high school students. This story was produced in RadioActive’s Spring Workshop. Listen to RadioActive stories, subscribe to the RadioActive podcast and stay in touch on Facebook and Twitter.