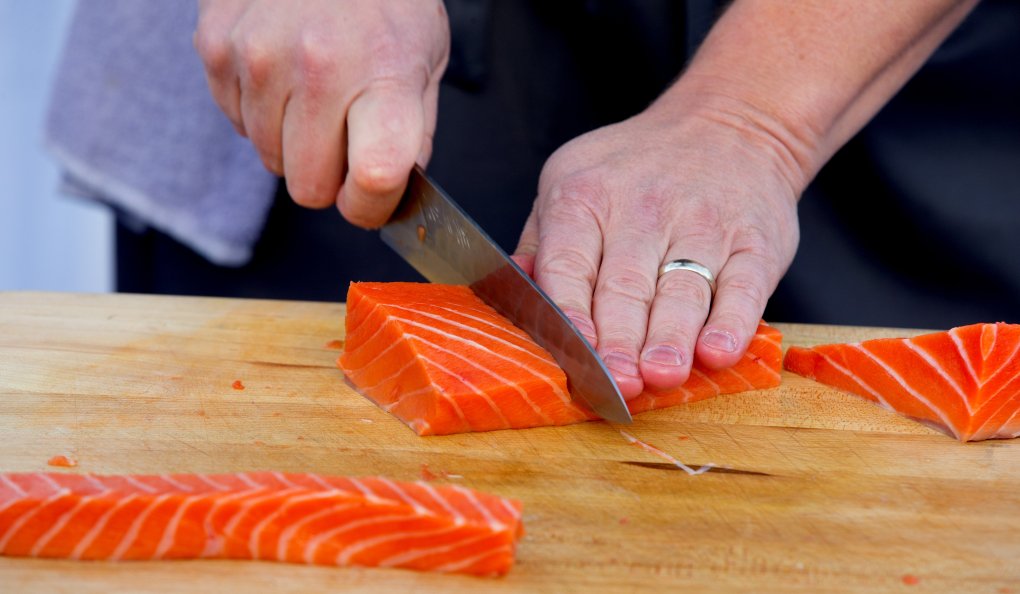 If we demand wild salmon on our plates, we are demanding healthy habitat where wild salmon can thrive in perpetuity.

IT’S time to save wild salmon — by eating them.

This seems counterintuitive. Why would we kill wild salmon if we are hoping to save them? The fact is, salmon are big business and consumers wield tremendous power through their purchasing decisions. When you buy and eat wild salmon, you are investing your dollars in our nation’s sustainable wild-salmon fisheries.

On June 4, U.S. District Court Judge H. Russel Holland released a ruling in a lawsuit filed by the Pebble Partnership against the U.S. Environmental Protection Agency. Pebble has plans to build North America’s largest open-pit copper mine in the headwaters of Bristol Bay in Alaska — home to North America’s largest remaining wild-salmon runs. The EPA’s involvement in Bristol Bay came at the request of tribes, commercial fishermen, sportsmen and business owners, but the court ruling earlier this month temporarily keeps efforts to protect Bristol Bay through the Clean Water Act on hold.

So what can be done in the meantime to protect this world-class resource?

First, educate your family and friends about wild salmon.

This spring, in partnership with commercial and sport fishermen, Alaska Native residents, chefs and conservationists, we completed a national tour of “The Breach,” a documentary film about the history and future of our last great wild-salmon runs. As a filmmaker and former Alaska salmon fishing guide, and a chef who serves wild salmon, we are both motivated by wild salmon economically. But it’s more than that.

We, like most people living in this part of the world, revere salmon as the iconic keystone species they are. They’re not simply a product to be pumped out of a factory — they are the very lifeblood for 137 different creatures when they return to our rivers and streams with the ocean’s nutrients inside them. They are an irreplaceable part of our Northwest landscape — they’re even inside the trees. And yet their future here remains uncertain.

As “King of Fish” author David R. Montgomery says in the documentary film, “We haven’t done a particularly good job of protecting the resource when it comes to wild salmon.” That’s true.

Historically, European and American settlers overfished wild salmon until their numbers crashed. Worse, salmon spawning rivers were destroyed when they were dammed, polluted and scoured by rapacious logging and mining practices. Hatcheries and open-net-pen fish farms designed to mitigate this damage have in the long run actually caused more.

Thankfully, there are some healthy runs of wild salmon left — and great strides under way — such as the removal of the two Elwha River dams, which provide real hope for seeing wild salmon return. But of all the fully sustainable wild-salmon runs remaining in North America, none are as strong or as vital as the runs in Bristol Bay in Alaska.

Unfortunately, instead of listening to science and the opinions of 65 percent of Alaskans, the Pebble Limited Partnership decided to sue the EPA and delay the protection process that millions of Americans have asked for.

Within weeks, more than 50 million wild sockeye salmon will return to Bristol Bay — the most in decades. Alaskan salmon are protected by the most stringent management practices in the world. In fact, protection of salmon was mandated by law in Alaska’s constitution in 1959.
When we purchase wild salmon, we’re purchasing a food source that is the same as it’s been for millennia — fed by the krill and currents of the open ocean. It’s nutritious and sustainable — and in Bristol Bay alone, provides 14,000 jobs on the West Coast, to the tune of $1.5 billion to the American economy. That simply can’t be said about other non-wild salmon options in the marketplace.

The choices we make with our forks and our dollars will affect what remains for future generations. If we demand wild salmon on our plates, we are demanding healthy habitat where wild salmon can thrive in perpetuity. And wild Bristol Bay sockeye can be purchased year-round, flash frozen or canned, with the same nutrients, quality and flavor as the day it was pulled out of the water — for a price affordable to most.

At the end of “The Breach,” Montgomery finishes his statement about human interaction with wild salmon by telling us, “If we don’t get Alaska right, we may have a clean sweep of getting it wrong.”

So what can else can we do?

Telling the Obama administration how we feel about wild salmon in Bristol Bay is the next best thing. But fundamentally, if we revere wild salmon — as 90 percent of us say we do here in the Pacific Northwest — we need to pick up our fork and insist they remain, by eating them.

A writer and director, Mark Titus recently directed “The Breach,” an award-winning documentary about wild Pacific salmon. Tom Douglas, a chef and owner of a diverse group of Seattle restaurants, co-produced “The Breach.”