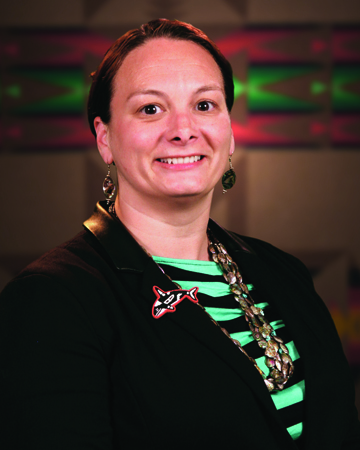 Quil Ceda Village is far more than the economic arm of the Tulalip Tribes; it’s a municipality in its own right. In fact it’s only the second federally recognized city in the nation. Founded in 2001, the QCV, like any other city, is governed by a city council and city ordinances. On June 16th, the current council, including newly appointed president, Theresa Sheldon, was sworn in along with Marie Zackuse and Glen Gobin.

“Historically the board members who did not hold an executive seat on council where assigned to represent the Quil Ceda Village Council,” Sheldon explained. “Since I have no businesses myself, it makes me extremely unbiased when considering the types of development policies and laws that we should enact in the village therefore making it easier for me to accomplish the role of President of the city.”

The Consolidated Borough of Quil Ceda Village has undergone a metamorphosis in the last two decades. Once a munitions dump, then leased to Boeing, this 2,000 acres is now home to over 150 businesses and sees over 60,000 visitors a day.

“Thankfully our past leaders put this city into motion over two decades ago to ensure we have the prospering economic development of today,” Sheldon continued. “I’m grateful for the confidence of the board to fulfill this duty. Quil Ceda Village President is a one-year appointment, I was appointed with unanimous support from our tribal council.

“The role of the council and the president is laid out really well in the charter. My duties are very straight forward, I preside over the monthly QCV council meetings, I’m the spokesperson of the village council, but I have no regular administrative duties or authority in the day to day operations. However, unlike the chairman of the Board, who only votes in case of a tie, I am a voting member of the Quil Ceda Village Council.”

At the June 16th meeting the discussion ranged over a variety of topics including roads and infrastructure, tribal enterprises, and police and court services.

“We received an update on the 116th overpass construction project which will be an 18 month project and will begin in July,” said Sheldon. “We will begin to replace the existing bridge with a wider bridge to provide an additional through lane in each direction and a double left turn to the I-5 ramps.

“This work includes additional pedestrian pathways across the interstate, will improve LED lighting, new signals and signage. Tulalip has been working on increasing capacity on 116th Interchange since 2001 and the Tribe has put in $23 million for this interchange. We have worked closely with WSDOT to ensure all safety measures will be covered as this project is considered massive with a lot of concrete, dirt, and gravel being brought in.”

The Tulalip Market, formerly a simple gas station located on 116th Street at the North end of the Village, will now become the Tribes’ drive-through smoke shop, deli, and gas station.

“It was interesting to hear about the product choices and details of the enterprise,” said Sheldon. “We take for granted things like point of sale systems. When you go to a store, they just work. There are a lot of logistics that go into placing the systems. We use Chevron’s system for gas sales and a different system for merchandise. All those systems have to speak to each other and seamlessly integrate for accounting purposes.

“I’m so thankful that we have staff in place looking at all the details as well as the big picture; I want to raise my hands to our Quil Ceda Village staff for working together to ensure we have a successful opening and a successful store, t’igwicid. The store will officially be open for business during the second week of July.”

Like many other municipalities, the City pays for police and court services rather than retaining a city police force or operating its own court system. In this instance the Tulalip Police Department and Tulalip Tribal Court provide the services. In May alone, the Tulalip Police Department responded to 532 calls for services and conducted 72 traffic stops within the Village.

“From the beginning of the year until now, a lot of the calls were for suspicious vehicles (242 calls), shoplifting (279 calls), traffic stops (411) and trespass (110),” said Sheldon. “We averaged 3.6 assaults per month and 1.8 hit and runs. Anytime someone is hurt, it’s a big deal, but for the amount of visitors we see (60,000 daily), these are relatively low numbers.

“One of the ongoing concerns for tribal police is the transient encampments. Transient camps are a concern because they often have unsanitary or unsafe living conditions, and property damage can occur when squatters move into vacant buildings and properties. There’s also a safety concern from visitors about aggressive panhandling.

“The Tulalip Tribes and Quil Ceda Village staff believes in offering respect to every person, regardless of their path in life,” declared Sheldon. “We also absolutely support Tulalip Police in making decisions to address safety concerns.”

Of the cases filed at Tulalip Tribal Court approximately 28% of criminal cases, 33% of drug cases and 44% of “miscellaneous” criminal cases (mostly theft and trespass) originate in Quil Ceda Village.

“Tribal Court and the Prosecutors Office will be using the funding they receive from Quil Ceda Village to hire additional staff this year. Thankfully our court system runs effectively and our court staff does a great job making sure that all cases are processed and heard in a timely manner.”

Reflecting on the meeting, Sheldon said she looks forward to creating a new strategic plan for the Village and encourages more Tulalip citizens to become involved if they would like to learn more about the cities operations.

“All Quil Ceda Village Council meetings are open to the public,” she said. “We hold monthly meetings, typically the 2nd Tuesday of each month. I want people to know we conduct these meetings in an open and transparent way and that we are constantly thinking of our future generation with every decision we make.”