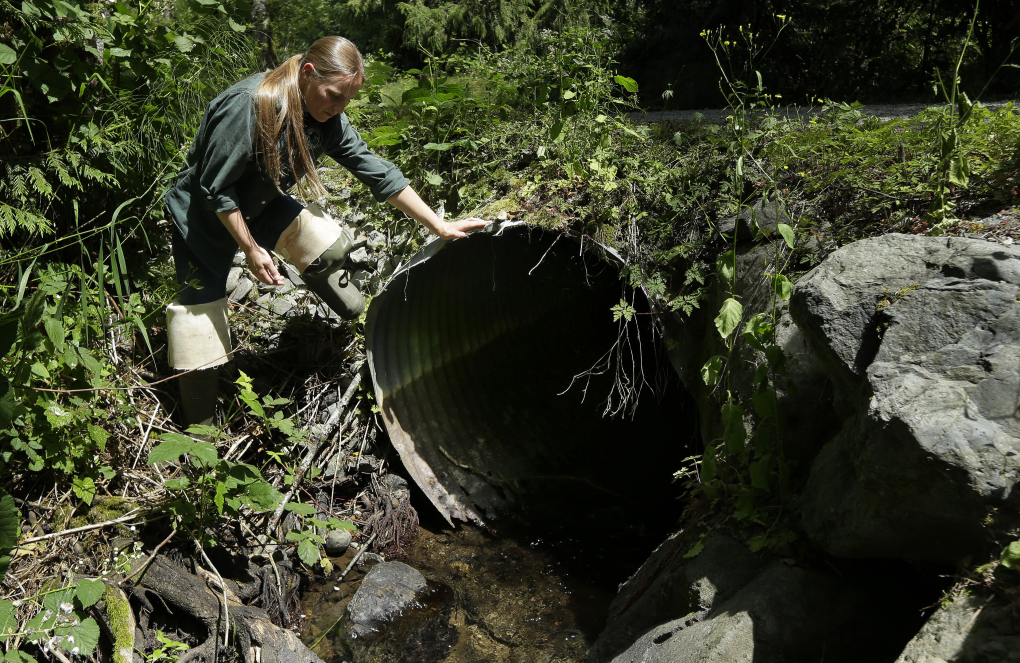 State biologist Melissa Erkel looks at a culvert along the North Fork of Newaukum Creek near Enumclaw. (Ted S. Warren/AP)

By  PHUONG LE, The Associated Press

Washington state is under a federal court order to fix hundreds of barriers built under state roads and highways that block access for migrating salmon and thus interfere with Washington tribes’ treaty-backed right to catch fish.

But it’s not clear how the state is going to come up with the estimated $2.4 billion it will take to correct more than 825 culverts — concrete pipes or steel structures that allow streams to flow under state roads and highways.

The state says it would need to fix an average 30 to 40 culverts a year by 2030, spending $310 million every biennium, to comply with the 2013 court injunction.

The state has appealed the judge’s decision. But in the meantime, the Legislature last week approved millions to correct fish barriers statewide.

The 16-year transportation revenue bill includes $300 million for fish passage, dramatically more than in the past but far short of what the state estimates it needs. The House still needs to pass two Senate-approved bills to complete the transportation package.

“I would like to have seen us put more money toward that,” said Rep. Ed Orcutt, R-Kalama, ranking member of the House Transportation Committee. “We do need to be working on this. I think it’s a good start and I’m glad we’re doing it.”

Lawmakers have referred to this case as the other McCleary decision, which told the state to fix the way it pays for public schools.

“It is a treaty right. Tribes ceded the entire state of Washington to the federal government. In return, we asked that we have salmon forever,” said Brian Cladoosby, chairman of the Swinomish Indian Tribal Community.

He said he was disappointed with the state’s appeal and questioned how much money the state had spent in appealing the case that could have gone toward fixing the problem.

The state Department of Transportation, which is responsible for correcting the largest number of culverts under the court order, has been working on fish passage for a number of decades, said Paul Wagner, the agency’s biology branch manager.

This year, the agency plans 13 fish-passage projects across the state. It also completed 13 such projects in each of the past two years.

But Wagner acknowledged that significantly more money will be needed to meet the terms of the injunction.

Culverts can be a problem for fish in several ways. Stream flows running through a small pipe can be too fast, making it harder for fish to swim upstream to spawn or downstream to reach the ocean. Perched culverts also can be too elevated for fish to jump through.

When culverts are removed or fixed, the benefits are immediate because it opens up miles of critical habitat upstream to fish, said Henning, who also co-chairs the state’s Fish Barrier Removal Board.

That board, created by the Legislature last year, is working to coordinate with counties, private landowners, tribes, state agencies and others to get the most benefit out of projects to remove fish barriers and recover salmon runs.

“When you think about a fish swimming upstream, it goes through all these jurisdictions,” Henning said.

Counties, cities, forest owners and others have worked independently to remove fish barriers only to find that culverts elsewhere on the stream continue to block fish passage.

On the North Fork of Newaukum Creek near Enumclaw one afternoon, Henning and Department of Fish and Wildlife fish biologist Melissa Erkel pointed out a project King County did several years ago to replace two aging pipes with a large box culvert that is wide enough to allow the stream to meander.

But less than a quarter-mile upstream, two culverts block access for fish.

Erkel said she has provided technical assistance to the private landowner, who plans this fall to replace them with a 35-foot span bridge to allow more water to pass under the private road.

“Fish passage is really important work. We’re not just doing it because of the lawsuit. It’s something that needs to be done,” Henning said.