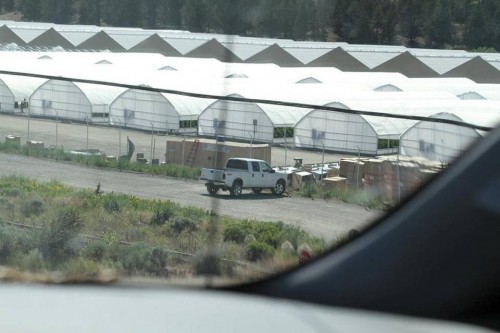 A surveillance photo taken in June 19 from the northbound shoulder of Highway 395 in rural Modoc County shows part of a large marijuana manufacturing site on the XL Ranch, which is American Indian Land belonging to the Pit River Tribe. The white pickup truck belongs to a private security firm contracted to guard the site.
Photo/ Special Agent Charles Turner, U.S. Bureau of Indian Affairs

By Denny Walsh, The Sacramento Bee

Law enforcement officers from at least four agencies on Wednesday swooped onto American Indian land occupied by two tribes in Modoc County and seized at least 12,000 marijuana plants and more than 100 pounds of processed marijuana.

In a release announcing the raids, Benjamin Wagner, the U.S. attorney in the Sacramento-based Eastern District of California – which includes Modoc County – emphasized, “Other than contraband marijuana and items of evidentiary value, no tribal property was seized and no federal charges are pending.”

Warrants signed Tuesday by U.S. Magistrate Judge Carolyn K. Delaney authorized federal agents to search “two large-scale marijuana cultivation facilities located on federally recognized tribal lands at the Alturas Indian Rancheria and the XL Ranch in Modoc County.” The county forms the northeast corner of California, with Oregon on the north and Nevada on the east.

A lengthy affidavit filed in support of the warrants quotes two informants as telling sheriff’s deputies that the two manufacturing sites are apparently operated jointly with the owners of a large cigarette-maker in Canada. In addition, according to the affidavit, a member of the Alturas Tribe has told the county’s supervisors that the marijuana manufacturing venture is financed by Jerry Montour, the top officer and controlling shareholder in the Canadian business. The two informants said they saw Montour earlier this year on the Alturas Indian Rancheria in an area between the heavily guarded building housing the pot-growing enterprise and the tribe’s Desert Rose Casino.

Wagner said he departed from his policy to decline comment on continuing investigations that have not yet resulted in criminal charges because the “grows in question have received substantial attention in Modoc County, as has the U.S. Department of Justice’s guidance relating to marijuana cultivation on tribal lands.” American Indian territories are sovereign nations with separate governments and are generally outside the province of federal, state and local authorities.

“The volume of marijuana that the XL facility alone was capable of producing, estimated at approximately 40,000-60,000 plants, far exceeds any prior known commercial marijuana grow operation anywhere within the 34-county Eastern District,” Wagner said. “According to tribal representatives, all of the marijuana cultivated at both facilities was intended to be distributed off tribal lands at various unidentified locations.

“As indicated in the search warrant affdavits, the investigation to date indicates both operations may have been financed by a third-party foreign national,” he said.

He said his office consulted with representatives of both tribes on multiple occasions before Wednesday’s raids and reminded them that cultivation of marijuana is illegal under federal law. Wagner said his office expressed to them the concern that large-scale, commercial grows on tribal lands have the potential to introduce controlled substances derived from the plants “in a manner that violates federal law, is not consistent with California’s Compassionate Use Act, and undermines locally enacted marijuana regulations.”

This specter, the tribes were warned, is “a concern for local law enforcement throughout the Eastern District and potentially warranted federal action,” Wagner said.

According to reports in Canadian newspapers and business publications, Montour’s company, Grand River Enterprises, is a billion-dollar manufacturer of tobacco products that are distributed in several countries, including wide distribution on tribal lands throughout the United States. Montour and his father, Peter, were two of the three founding partners.

The company is the largest private employer on Ontario’s Six Nations, the most populous native reserve in Canada and the only location of all six Iroquois nations.

Jerry Montour, a 45-year-old Mohawk, lives in Hamilton, a port city that wraps around the westernmost shore of Lake Ontario.