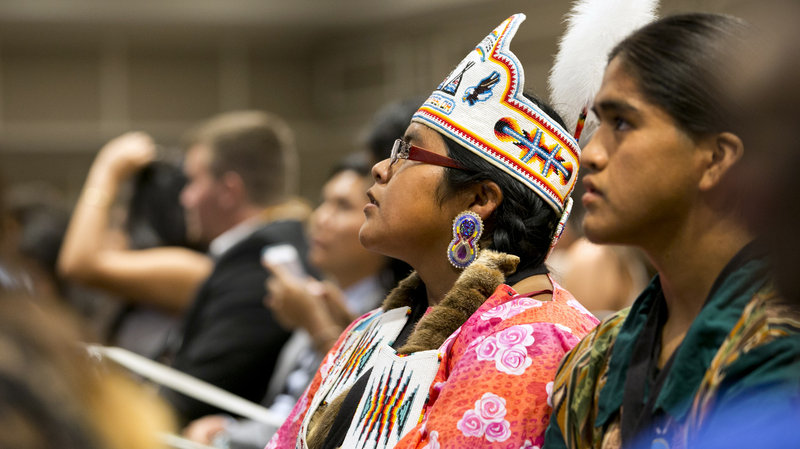 “I know that you may have moments in your lives when you’re filled with doubts, or you feel weighed down by history … But when you start to feel that way, I want you all to remember one simple but powerful truth — that every single one of your lives is precious and sacred, and each of you was put on this earth for a reason,” Michelle Obama said addressing the gathering.
Jacquelyn Martin/AP

First lady Michelle Obama spoke to Native youth at the White House last week, saying their customs, values, and discoveries “are at the heart of the American story.”

“Yet as we all know, America hasn’t always treated your people and your heritage with dignity and respect. Tragically, it’s been the opposite,” Obama continued.

Obama addressed the inaugural White House Tribal Youth Gathering, which brought together more than 1,000 youths from around the country. The conference featured sessions on safety, health and education, moderated by young people.

“Your traditions were systematically targeted for destruction,” she said, speaking about forced relocation, young people sent to boarding schools and other regulations that “literally made your cultures illegal.”

“While that kind of blatant discrimination is thankfully far behind us,” she said, “you all are still seeing the consequences of those actions every single day in your Nations. You see it in the families who are barely getting by. You see it in the classmates who never finish school, in communities struggling with violence and despair.” 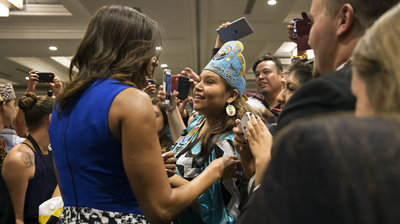 Obama read the names of some of the 240 tribes represented.

The gathering coincided with an announcement from Department of the Interior Secretary Sally Jewell, who announced new funding and grants devoted to education in tribal nations. Education was a focus for many at the gathering as well, including a session with Chief Technology Officer Megan Smith, who spoke on the importance of science and technology.

Obama also touted Gen-I, the President’s initiative focused on empowering Native youth. To be invited to the conference, individuals ages 14-24 were required to enter the Gen-I Challenge.

The afternoon sessions ended with remarks from Cheyenne Brady, Miss Indian World and member of the Sac and Fox Nation in North Dakota. Brady emphasized the importance of education to the American Indian population. The day also included a performance from Canadian artist Inez Jasper, who encouraged the youth to join her on stage.

The first lady was introduced by 15-year-old Hamilton Seymour, a member of the Nooksack Indian Tribe in Bellingham, Wash., who wore traditional attire, as many attendees did.

“We have made a difference,” Seymour said. “This day signifies that our voice has been heard.”