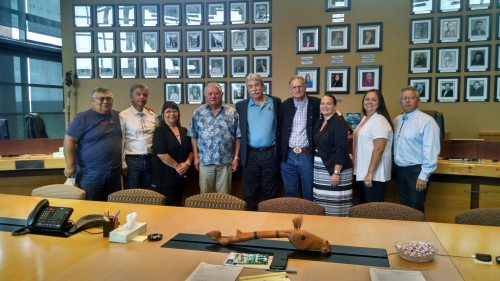 TULALIP – Tulalip Tribes made Father Patrick Twohy an honorary member during the Saturday, July 11 regular board meeting. A petition authored by Don “Penoke” Hatch Jr, a Tulalip member, asked that Twohy be made a permanent member of the Tribe for his spiritual work and service with the Tulalip community and surrounding Native population. It was granted with unanimous approval.

Twohy, a Jesuit priest and director of the Rocky Mountain Missions of the Oregon Provence of the Society of Jesuits, has served as chaplain to Native Americans for 36 years for the Archdiocese of Seattle. His work in Tulalip has spanned numerous generations to become a part of the Tulalip people’s spiritual history.

“He’s gone to funerals and headstone blessings and visits the hospital when someone is sick. Or he goes to the home of people who just need picking up; he is there for the families,” said Hatch, who has known and worked with Twohy over three decades. The two still work together to provide necessities to the Native population in Seattle through donations to the Chief Seattle Club.

Described as a peaceful man and a true servant of Christ, Father Twohy has authored two books about his work in Native communities. In the forward to his book, “Beginnings: A Meditation on Coast Salish Lifeways,” Twohy expresses his connection to his work and to the Native people he ministers to.

“The book, Beginnings, is meant to be a bridge of understanding between First Nations Peoples and other peoples. Through the knowing of our true relationships with one another, we may find that though we all walk separate paths, we are on one sacred journey.”

“He is part of us and in our reservation his work has such a tremendous impact. No matter what religion you are, he is always there for you,” said Hatch.

Twohy was wrapped in a Pendleton blanket during the ceremony as a symbol that he is family and will be provided for. He was also gifted a Chief Seattle Club jacket for his numerous years of service to the club.

“Today is one of the happiest days in my life,” remarked Father Twohy, who said he felt overwhelmed with joy. “There is no greater honor for me than to have accompanied the Tulalip people on their journey. I have known so many generations and I have great trust and hope in the people that they will continue this sacred way of life that has been passed down to them. I admire the Tribe for their compassion, not only for their people but all people. They care for all, for instance all the help they have given to Chief Seattle Club. It is remarkable the support they have given us.”

Twohy, now as a member, will be buried in the Mission Hill Cemetery in Tulalip alongside the people he has faithfully ministered to.

“I have known generations of teachers here at Tulalip and so many great elders that I feel so much learning has been passed on to me. I hope to have many more years to walk with the people. It is such an honor and joy for me, and I would like to walk with them into the next world,” said Twohy.