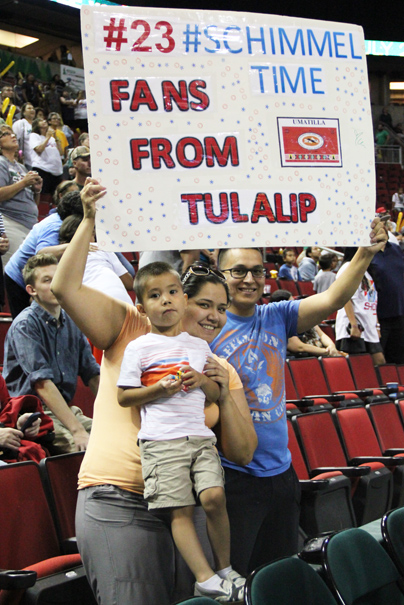 On Saturday, July 18, Seattle’s KeyArena was home to the WNBA’s Seattle Storm second annual ‘Native American Heritage Night’, as the Storm hosted the Atlanta Dream and their Native all-star guard Shoni Schimmel. For the second straight year, KeyArena reported a sellout crowd of 9,686 fans against the Atlanta Dream thanks in large part to the growing popularity of Schimmel to urban tribal youth. The sellout crowd was made up primarily of Native American tribes from all over the Pacific Northwest who journeyed to Seattle to root for Schimmel. In fact, every time Shoni “Sho-Time” Schimmel came into the game or had her name announced, the crowd went wild with excitement and joy.

Schimmel, a 5-foot-9 guard, is a member of the Confederated Tribes of the Umatilla Indian Reservation and was raised on the reservation just outside Pendleton, Oregon. Many fans in the building wore her image on t-shirts and waved homemade signs celebrating Schimmel. The fan base even helped vote her to next week’s All-Star Game as a starter, but Schimmel is far from the player who last year became the first rookie to win the game’s MVP honor.

Schimmel’s popularity among Native Americans has made her one of the more recognizable names in the WNBA, and nowhere is her popularity on greater display than in her annual trip to Seattle. Fans from as far away as the Flathead Indian Reservation in Montana made the journey to Seattle just to watch her play. 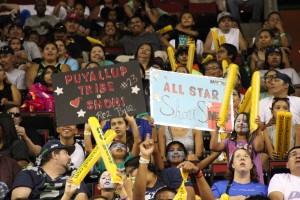 Prior to the game, Schimmel spoke on the tremendous outpouring of support she receives on the west coast.

“It’s a bunch of support out there, especially in Seattle. There’s a lot of people coming out there because it’s the closest to home I get to play. My whole family has traveled to Seattle to watch me play, it’s going to be special for me.”

The Tulalip Youth Services department seized the opportunity of ‘Native American Heritage Night’ to provide a fun and exciting activity for our tribal youth. Over one hundred tickets were purchased and given to youth who showed on Saturday afternoon at the Don Hatch Teen Center, where they were then transported via shuttle bus to Seattle’s Key Arena.

According to Shawn Sanchey, Youth Services Activity Specialist, the youth were abuzz all week about the chance to see Shoni play in person.

“The kids all know who Shoni is and the excitement was building all week leading up to the game. A lot of it has to do with her being Native and growing up on a reservation. It helps a lot for the kids to see someone with a similar background succeed on the professional level, she inspires them. They really like her and look up to her,” said Sanchey. 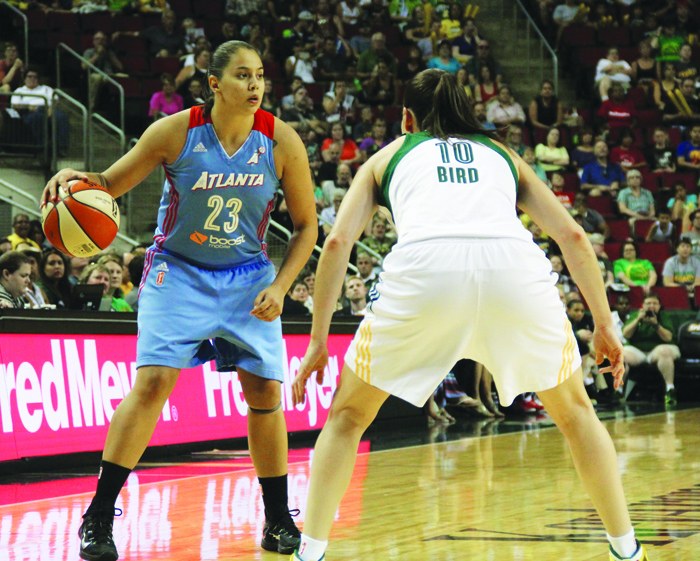 The Storm got off to a scorching start, outscoring the Dream 27-16 in the first quarter. By halftime, the Storm had torched the befuddled Dream for 48 first-half points and took a 48-33 lead to the locker room. All those Shoni fans in attendance were given a very lackluster 1st half performance, as she hadn’t even attempted a field goal.

In keeping with the Native theme of the night, the Storm provided a half-time entertainment consisting of pow-wow dancers and drummers from the Chief Seattle Club, Young Society, and Northwest Tribal Dancers.

After Seattle went ahead by 19 points to start the 4th quarter, Schimmel, who had been held scoreless to that point, finally got in rhythm and displayed why she’s called “Sho-Time”. She recorded all eight of points, two of her three rebounds, and one monstrous block that sent the crowd into a short frenzy during the final quarter. The biggest cheer was when she hit her first 3-pointer with 3:59 left in the game. Her late game efforts come up short though, as the Storm would go onto claim victory after scoring a season high 86 points.

Following the game, many of the fans who came to see Shoni remained in their seats after it was announced she would be addressing the crowd and signing autographs. In her post-game interview, Schimmel took to the mic to talk to the all-Native crowd and thanked them for their support. She was asked about the hundreds of young Native American girls in the stand who idolize her and what message she wanted to send to them.

“I never thought I would be in the WNBA, but here I am. Follow your dreams! Look at me now, this little Native girl from Oregon playing professional basketball.” 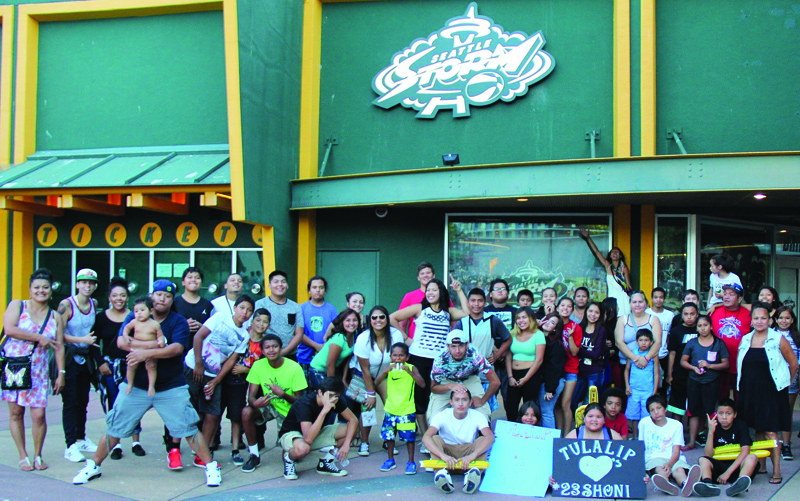