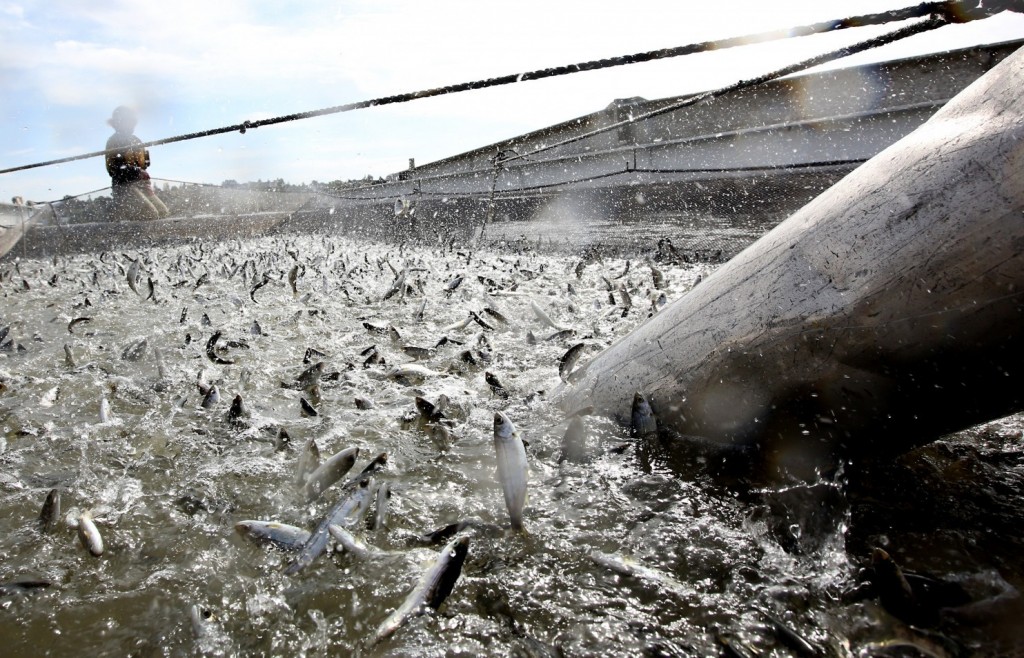 Young salmon called “smolts” are loaded into a floating net suspended on a barge at Mare Island, Calif. (Rich Pedroncelli/AP)

As a drought tightens its grip on the Pacific Northwest, burning away mountain snow and warming rivers, state officials and Native American tribes are becoming increasingly worried that one of the region’s most precious resources — wild salmon — might disappear.

Native Americans, who for centuries have relied on salmon for food and ceremonial rituals, say the area’s five species of salmon have been declining for years, but the current threat is worse than anything they have seen.

“I grew up always having salmon,” said Lorraine Loomis, fisheries director for the Swinomish Indian Tribal Community, whose culture is so intertwined with the migrating fish that they’re called the “People of the Salmon.” Salmon feasts once marked every phase of life on the reservation north of Seattle — naming ceremonies, weddings, funerals, memorials to the dead. Now they are few, she said.

An estimated quarter-million salmon, more than half of the spring spawning run up the Columbia River, perished, probably because of a disease that thrives in warm water and causes gill rot, officials said. Normally cool streams in the river basin are 13 degrees warmer than the 60 degrees preferred by salmon, Brigham said. 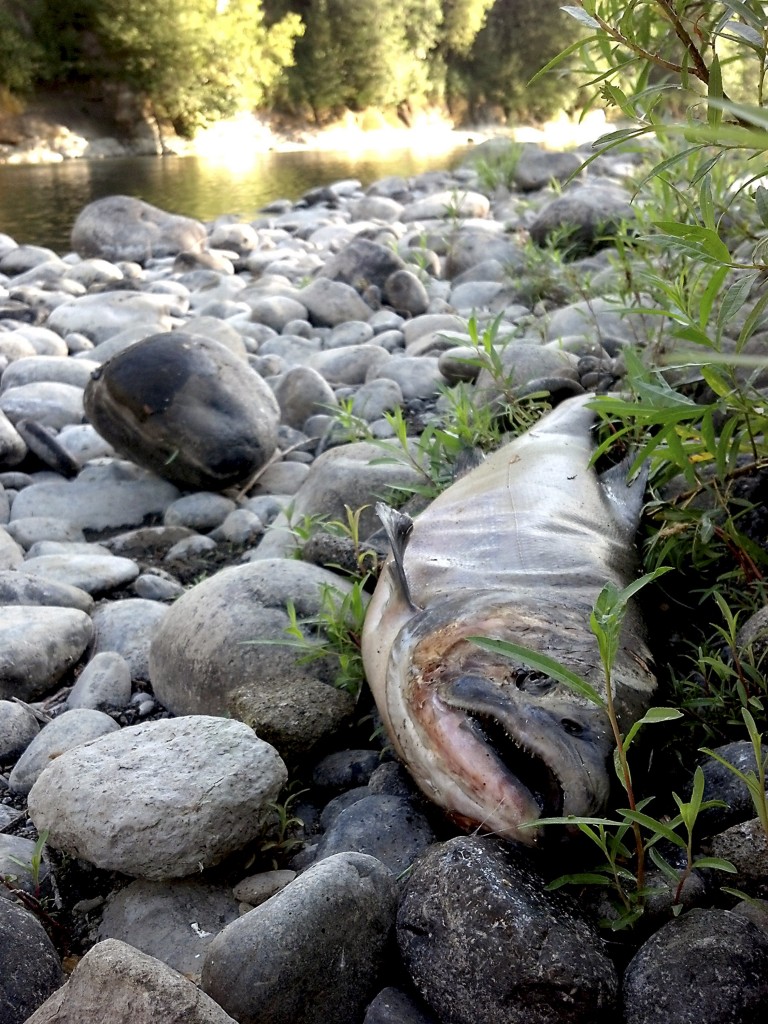 The carcass of a Chinook salmon, an apparent victim of high water temperature, is shown on the bank of the Clackamas River in Oregon. Oregon wildlife officials are restricting fishing on most of the state’s rivers in an unprecedented effort to aid fish populations dying off from high water temperatures as the state suffers ongoing drought conditions. (Reuters/Rick Swart/Oregon Department of Fish and Wildlife)

Salmon in the Northwest come in a variety — chinook, pink, coho, sockeye and chum — and that diversity has helped them survive for eons. When they hatch, some babies stay in place to eat and grow before migrating to the Pacific Ocean. Others swim to the ocean right away.

Adults stay in the Pacific for three to seven years before returning to streams where they hatched by swimming through Puget Sound in Washington or up the Columbia River, which runs from Alberta, Canada, to Oregon.

But as the climate warms, more salmon are starting to move farther north to Canada, experts say. Swimming to cooler waters in the north signals a major shift in behavior for the fish, and public officials are watching the trend with dread.

In addition to their significance to Native American communities, the salmon are worth more than $1 billion annually to each state’s sport fishing and tourism industries, which support tens of thousands of jobs.

Oregon and Washington officials recently closed dozens of recreational and commercial fishing spots. The U.S. Fish and Wildlife Service trucked 160,000 salmon 100 miles from a hatchery in central Oregon to a cooler part of the Columbia River.

As more fish vanish, the Swinomish, whose reservation skirts five bays, rely on handouts from the state and tribal councils. They accept 5,000 to 10,000 pieces per year to freeze, Loomis said.

“There’s just no water,” she said. “The glaciers are almost gone. The snow in the mountains is not good.” Even if salmon survive, but in tiny, remnant populations, “we won’t be able to sustain ourselves.” 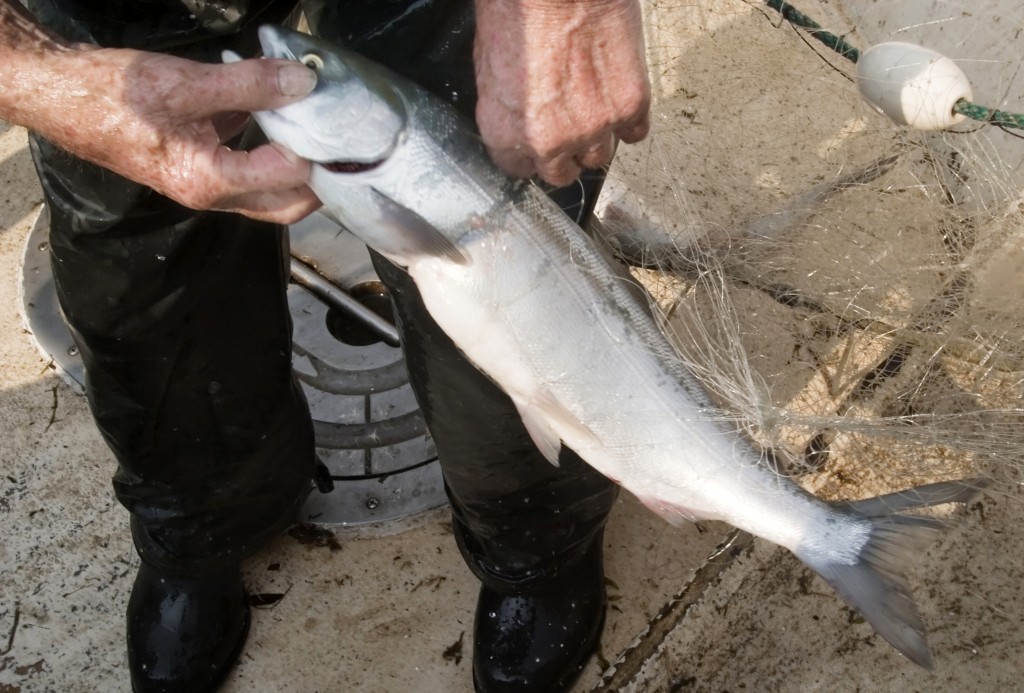 Commercial fisherman Les Clark pulls a sockeye or blueback salmon from his net while fishing on the Columbia River near Skamania, Wash. More than a quarter million sockeye salmon returning from the ocean to spawn are either dead or dying in the Columbia River and its tributaries. (Gordon King/Yakima Herald-Republic via AP)

Off the coast of Oregon, wild chinook salmon are gathering for a fall spawning run up the Columbia, but experts say there’s a good chance many will never arrive to lay eggs in the streams and brooks where they hatched several years ago.

Besides facing long-standing hurdles such as dams, the fish now will encounter a large patch of warming water. U.S. Fish and Wildlife Service biologist Rich Johnson said the cooler ocean water probably will signal to the salmon that it’s okay to migrate up the warmer Columbia.

Scientists fear the chinook will suffer the sockeye’s fate. Die-offs mean that fewer eggs will hatch and hatchlings might not survive the warm water.

“The bleakest, most dire outcome is if this drought is sustained for a couple more years like California,” said Greg McMillan, science and conservation director for Oregon’s Deschutes River Alliance. Some populations “could go extinct,” he said.

But wild salmon have an array of survival tools. The species do not all migrate at the same time, and their hatchlings do not all behave the same. Some remain in shallow streams two years after hatching, while others head for the Pacific.