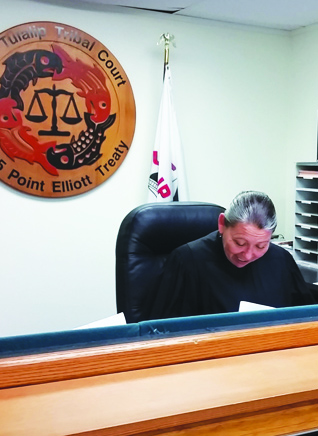 “Judge Pouley has been one of the most influential, prolific and iconic tribal judges of our time,” said Tulalip Court Director Wendy Church. “She holds three things very dear to her heart: her tribal court clients, the tribal court and tribal sovereignty. In the six years I’ve had the pleasure of working with her, I’ve seen her commitment and passion for those three things over and over.

When Tulalip’s longtime Chief Judge Theresa Pouley hears the accolades, the down to earth grandmother of two just chuckles and gives the credit to those around her.

“Tulalip was changing the face of Indian Country and asked if I would help do that,” she reminisced. “What an amazing journey for all of us. It’s like a whole new historic era. Never have Indian people been given the opportunity to determine their future more than in the last five years, and Tulalip is really responsible for that. Tulalip shared their economic advantage and programs they had, they were willing to put their name and their tribe on the line for the benefit of all Indian Country. They did it for everybody.”

Judge Pouley pointed out the Tribal Law and Order Act, the tribal provisions of the Violence Against Women Act and Tulalips ongoing commitment to restorative justice.

“I remember in 2005 we were starting to build a wellness court here and Maureen Hoban had a snippet out of a treaty that said what a peaceful and generous people [the ancestors of contemporary] Tulalips were, I’ve witnessed that first hand.”

Teaching and family, two of Judge Pouley’s great passions in life, will be her next adventure.

“I’m going to be teaching law, intro to law, contracts and civil procedures. I’ve applied for this job at Edmonds twice before. My appointment [as Chief Judge] is up in 2016, so it came at just about the right time. I’ll be working 170 days a year and I get every summer off and the whole month of December. I have my second grandbaby on the way, and more time with grandbabies is always good,” she grinned.

Even though she won’t be here to watch over it, Judge Pouley isn’t worried about the future of Tulalip Tribal Court. She sang the praises of her replacement, incoming Chief Judge Ron Whitener.

“Judge Whitener is up to the task,” she affirmed. “What an amazing thing to be able to take a professor from the University of Washington (UW) and recruit him to want to be a tribal court judge. He was part of the Attorney General’s advisory committee on youth violence, he has academic ties and a wealth of knowledge from working with the Attorney General. He is a Squaxin Island [citizen]. We’re really borrowing the best and brightest from the UW to take over as Chief Judge, it’s a testament to the forward progress of tribal courts that we can attract that kind of talent.”

Judge Pouley joked, wiggling her petite feet, “He has really big feet, so he’s not going to have any trouble filling these shoes.”

Although she’s leaving Tulalip Tribal Court, Judge Pouley said she’s not giving up all her ties to Tulalip. She is, after all, a resident of the Tulalip Reservation.

“Did you see Jon Stewart’s goodbye?” she asked, referencing the farewell speech of the late night comedian and host of The Daily Show. “It’s really hard to let go, but you should just view it as a long conversation, that way you never have to say goodbye. I feel that way about Tulalip. Our conversation is going to take a little pause, but it’s not the end of the conversation. I have clients here that know and respect me. There are lots of people that I’ve met and I’m grateful that they’re in my path and I can count them as my friends. I’ve seen Tulalip grow and become such a safe place.

“I just want to give a heartfelt thank you to all the people who have supported Tulalip Tribal Court over the years,” she continued. “Ten years is a long time. Tulalip has really taken care of me and treated me with open arms. I have so many friends here and I’ve developed knowledge and respect for so many people. I walk with all their prayers and good wishes every day. I feel so privileged to have been here.”