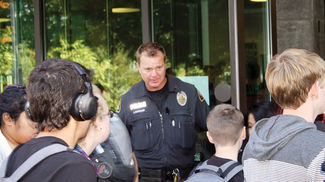 The Marysville Police Department will be able to more than double the number of officers that it assigns to local schools because of a recently received federal grant.

Marysville Mayor Jon Nehring said that they had the idea for a “youth services unit” about three years ago that would help create “a strong presence not only in the schools, but also just where youth are hanging out after school as well,” he said.

Nehring added that the city is “trying to be proactive and prevent youth crime where we can.”

The police department currently employs two SROs and together they have responded to more than 7,600 calls ranging from assault, gang activity, theft and threats in the last five years.

“Everyone is focused on the same goal, and that’s providing a safe environment, so the more officers you have that just stay at their school, you’re going to have that presence” said current Marysville SRO Jeremy Wood.

The two current SROs in Marysville have to cover incidents across all the district’s schools, so they expect the extra three officers to help.

Currently the officers have to move between the schools frequently, he said.

“Once something happens in a middle school we have to leave our high school to go there. Usually, when we leave we’ll get a call to come back to the high school that’s like ‘hey, when are you going to be back, because we have this issue going on,'” he said.

“With only two SROs it’s going to be hard to cover all those schools and you get better coverage if you have more, but they will also be able to respond in other areas more as well,” said Nehring.

The job of the SROs involves more than just responding to incidents though.

“They’re utilized by family and students for a variety of reasons, and in most cases, because of the relationships they’re building, it’s done in a very positive and helpful manner,” said Shawn Stevenson, principal of Marysville Getchell Academy of Construction and Engineering.

The officers also help build relationships with the students and the schools, said Stevenson.

“I think all of the SROs I’ve worked with in the last eight to 10 years have done a tremendous job helping to build relationships and allowing us to build community between our schools,” he said.

Wood said that building relationships with the students helps them view police officers in a new light as well.

“From my point of view, growing up and going through public high school, I didn’t get to build a relationship with the police, so I relied on the media or maybe that traffic stop where it was more of a negative interaction. So I think it’s important to show the kids, one: you’re human, and two: you’re here to support them and not just come down on them when things aren’t going well,” he said.

Getting to know officers also helps kids realize that they can go to the police when trouble comes up.

“When youth have relationships with the police they are more likely to approach them when they need help,” said Nehring.

“They’re not just seen as someone who comes by when something’s gone wrong,” said Stevenson.

Sutherland said it help kids move past their preconceived notions as well.

“They’ll be more willing to talk to us. A lot of times, they don’t want to talk to us because of whatever their beliefs, what they were raised with, or what they see on the media. We’re allowed to show them ‘hey, don’t be afraid,'” he said.

Nehring wanted to thank the area’s federal representatives like Sen. Maria Cantwell, Sen. Patty Murray and Rep. Rick Larsen, who all “really lobbied hard” for the federal funding for the city.