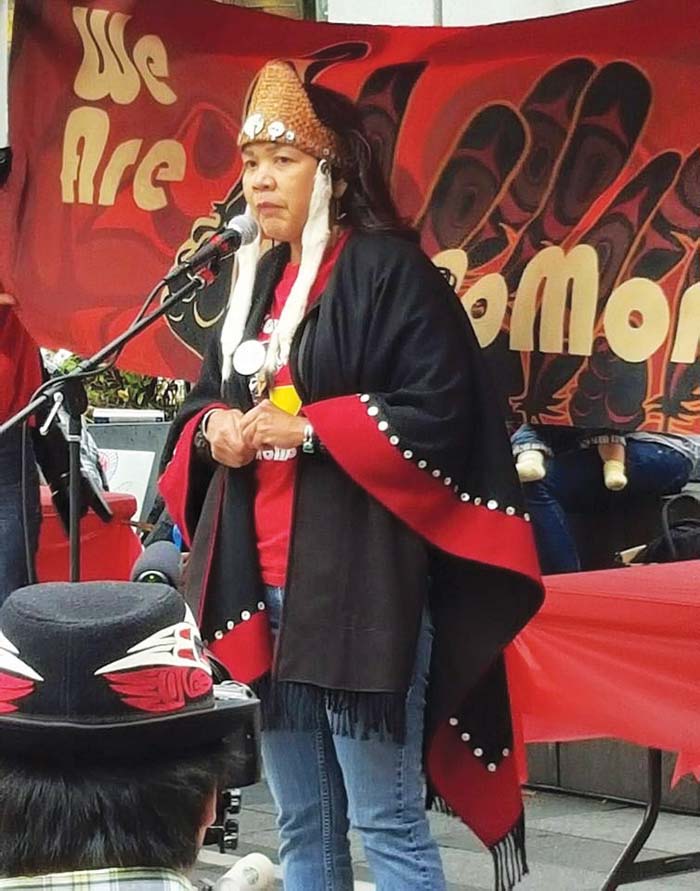 Sweetwater Nannauck from the Tlingit, Haida, and Tsimshian tribes of southeast Alaska and Director of Idle No More Washington speaks at the Indigenous People’s Day celebration at Westlake Center.
Photo/Kim Kalliber

Congress made the second Monday of October a federal holiday honoring Christopher Columbus in 1937. To all Indigenous, Native, and Fist Nations people, the commemoration of the man responsible for initiating the European colonization of the Americas, which led to hundreds of years of disease, colonial rule and genocidal extermination following the Italian explorer’s accidental trip to the Americas, is just another reminder of the ‘social silence’ we have had to endure as a culture.

‘Social silence’ is the anthropological term for a phenomenon that occurs in a human society when the subjects that are core to how the society function are exactly the ones that are never mentioned. Because European colonialism of the Americas and the mass genocide of millions of indigenous peoples led to the development of the United States (the beacon of hope, prosperity and freedom of the civilized world), there continues to be ‘social silence’ around the cruel and violent history of the United States, of colonialism, and of one Christopher Columbus.

If we maintain the social silence around colonialism, our past and present will always be bewildering. But if we break the silence, and talk about what truly matters, the confusing swirl of struggle and conflict can suddenly make sense. We become silent no more. We become Idle No More.

Seattle’s decision garnered national media attention and, since then, major cities along the west coast, including Anchorage, Alaska, Portland, Oregon, Albuquerque, New Mexico, and San Fernando, California, have passed legislation changing Columbus Day to Indigenous Peoples’ Days. Only days ago, Alaska Governor Bill Walker signed a momentous proclamation declaring the second Monday of October to be Indigenous Peoples’ Day. While the state of Alaska is the first to rename the federal holiday, credit must be given to South Dakota, the first state to rename the federal holiday as Native American Day in 1990. 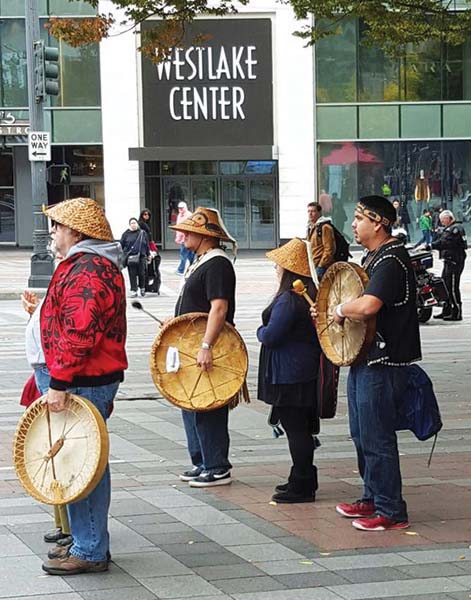 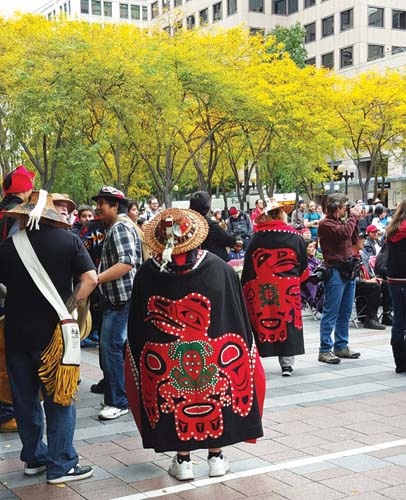 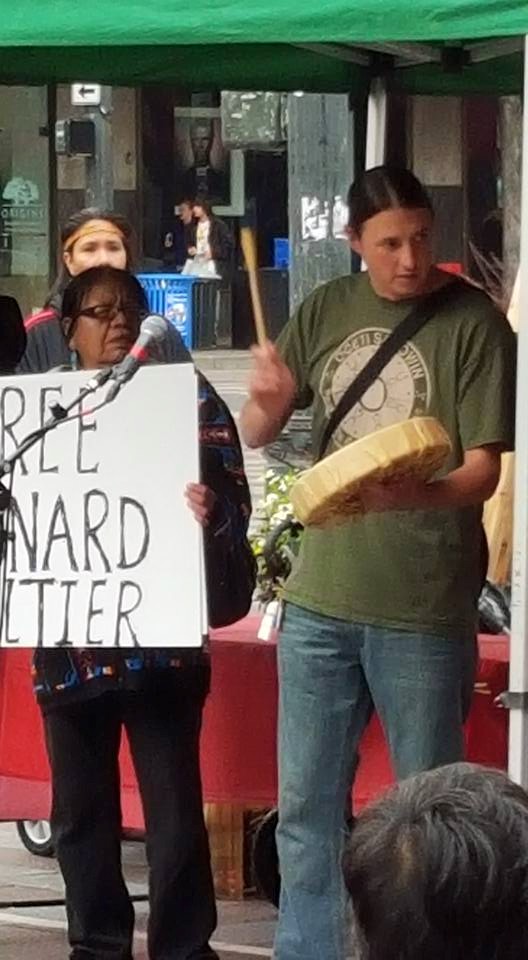 The celebration was comprised of three main events, to which any and all Native community members and supporters were freely invited to. The first event was a celebratory march from Westlake Park in downtown Seattle. Hundreds of people gathered at Westlake Park, most decked out in their Native regalia, and they beat their drums and sang as loud as they could while marching to their Seattle City Hall destination.

The second event took place in the Bertha Knight Landes room of Seattle City Hall, where Indigenous Peoples’ Day celebrators were greeted by the Seattle Mayor and Seattle City Councilmembers. 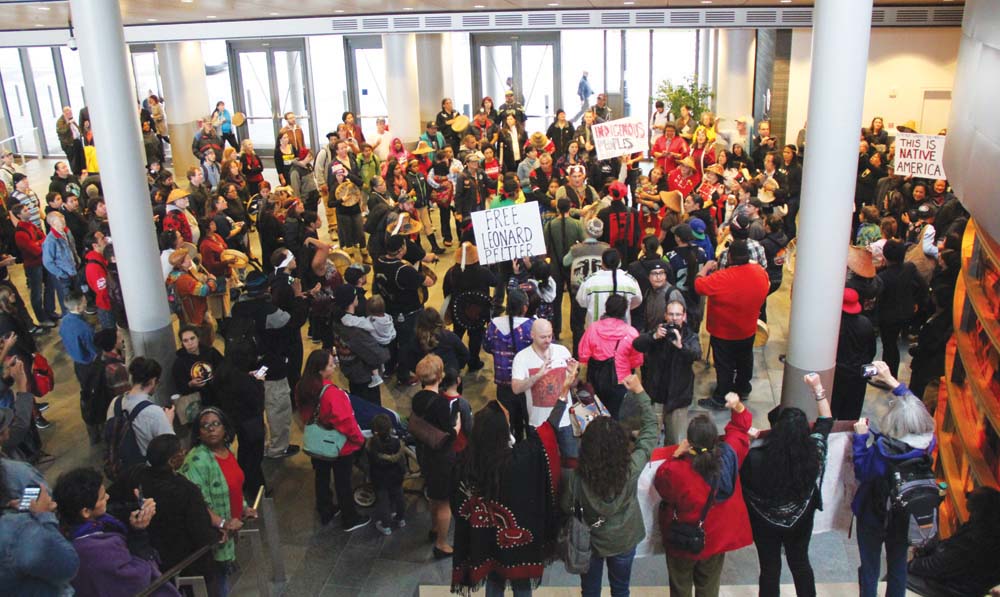 “Last year we took a historic step in the city of Seattle, and today it is an honor to be here and be with all of you to celebrate the 1st anniversary of Indigenous Peoples’ Day,” said Seattle Mayor Edward Murray. “It marks a new history in the city of Seattle and continues our dialogue with the tens of thousands of Native Americans who call Seattle home. It goes without saying that the history of this city is intertwined with the history of our Native peoples. We know we face challenges with the institutional discrimination that remains today, in housing, addiction and education. We will continue to work on these issues in Native communities. If anywhere in the nation we can make progress on these very challenging issues, it’s us. We have an incredible heritage of tribal communities who have been groundbreaking and leading this state long before my ancestors were here. Going forward, we have a lot of healing to do, but today we are here to celebrate. Today we are here to honor. Today we are here to say Indigenous Peoples’ Day is more than just a day, it’s every day.”

Lunch, consisting of salmon chowder, frybread, and a healthy fruit salad, was served to all those in attendance.

Following lunch, a very passionate, keynote speech was given by Winona LaDuke. She is a member of the Anishinaabe nation from the White Earth Reservation in Minnesota and is renowned for her activism on behalf of indigenous people and the environment. She is also a two-time Green Party vice presidential candidate. 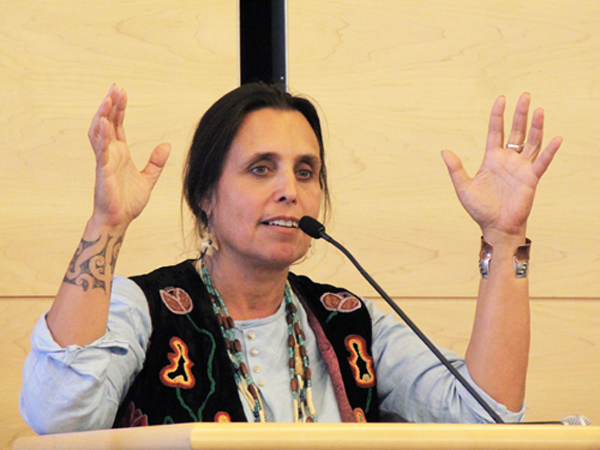 “What a great day it is. It is so happy, so liberating,” marveled LaDuke. “On our march here I noticed ‘Columbus Day Sale’ signs in the windows of some stores, and I was thinking does that mean I can walk around those stores and take whatever I want?”

“It is so liberating for me to be here and celebrate with you all in just how awesome it is be Indigenous people. You know, it’s always perplexed me how someone can name something as large as a mountain or sea or an entire day after someone as small as a human. It changes how people view things when everything is named after all these white guys. We are just beginning. There is a lot of work ahead in the renaming and recovering and restoration of our homelands. In doing so we remember our ancestors. In doing this we honor all those before us, all those here, and all those yet to come. And we reaffirm our place here as a people who remember, as a people who do not suffer from historic amnesia. We are a people who live today in a civil society who knows where it is exactly and is willing to be healthy, healthy and beautiful.”

“We are living proof that it is possible to live in a worldview that does not include empire, the destruction of our Mother Earth, and being ran by the morally corrupt oil and pharmaceutical companies,” continued LaDuke to a crown of cheering Native community members and supporters. “As we open our minds here I’m really honored to be with you in Seattle, a place that is in process of deconstructing the colonial renaming of our mountains, rivers, and oceans. I have great admiration and respect to y’all out here for standing up in what you know is true and being here to celebrate this great day.”

There was an evening celebration held at the Daybreak Star Indian Cultural Center that consisted in Native and Indigenous people from all over the nation performing their cultural songs and dances, not entertainment, but to celebrate each other. Celebration in recognition of a day that not only provides us with a platform to raise awareness, but it also commemorates a history of survival and perseverance. 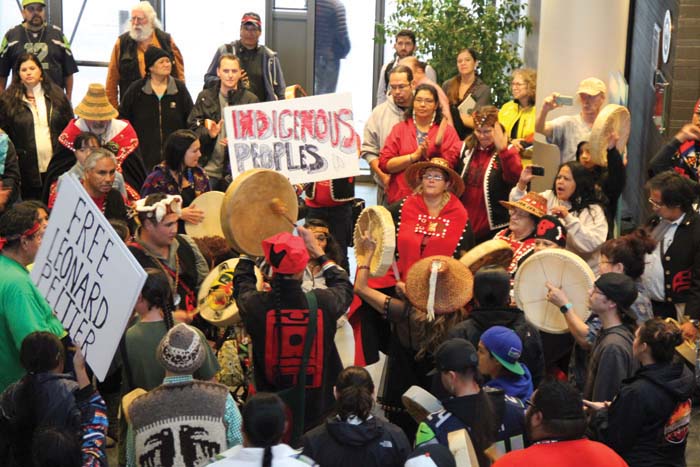 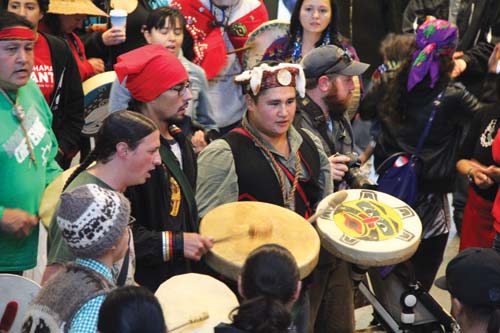