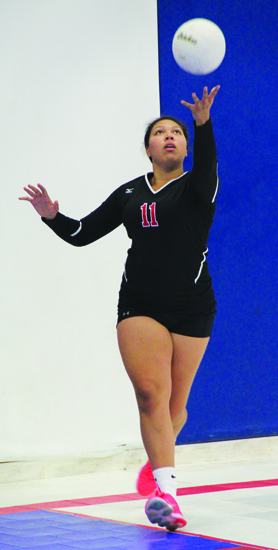 On Friday, October 9, the Tulalip Heritage Lady Hawks (3-4) volleyball team traveled to Lopez Island to take on the (5-1) Lobos. It was the second time these two teams have faced each other, with the previous being a 0-3 loss at home for Tulalip.

This time around the Lady Hawks had their full squad of players and have been playing very good team volleyball. The Lady Hawks were able to keep the score close in each game, countering each Lobos point with a point of their own. Surprisingly, two of the three games were played beyond the 25 point mark because neither team was able to take a two-point advantage. Unfortunately, even with the great effort being displayed by the Lady Hawks they would fall just short in both of those games.

On Tuesday, October 13, the Lady Hawks (3-5) again hit the road and traveled the short distance to Cascade Christian Reformed Church in Marysville to play the Arlington Highland Knights (4-4). It was also the second time these two teams had faced each other, with the previous being a very competitive 0-3 defeat at home for Tulalip. 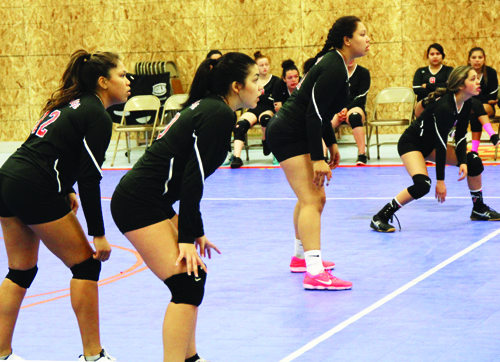 This match would have substantial repercussions on the Northwest 1B volleyball standings. Currently sitting in the #4 spot are the Knights and only one game behind them are the Lady Hawks at #5. With a win the Lady Hawks could have the inside track to being the #4 seed come playoff time, meaning they would host a home playoff game.

Prior to the game, coach Tina Brown spoke about the team’s mindset heading into this big matchup. “We’ve been working hard in practice and going over game film to have the girls see what areas of their game needs improvement. They agree communication is our number one area to focus on. Our communication has been the biggest factor in our wins and in our losses. If we focus on communicating and helping each other out, then this will be a great game. We have to communicate and trust each other.”

In the 1st game, everything that could go wrong for the Lady Hawks did go wrong. Early season struggles of hitting their serves in play was once again an issue. The Lady Hawks were giving away easy points to their opponent simply because they weren’t getting the ball over the net on their serves. As this continued to happen in the first game, the team really struggled to play together and they stopped communicating. The Knights went on to win the 1st game 25-13, in large part to the 7 unforced errors the Lady Hawks committed in their serving game.

In the 2nd game, the Lady Hawks cleaned up their service game and only committed 3 unforced errors. Getting the ball over the net got the girls engaged into the game and they communicated like they know how. Tying the game at 10-10 and then again at 20-20, the Lady Hawks were in good position to win the game. However, the Knights called timeout after the game was tied at 20-20 to talk things over. Their coach noticed the Tulalip front line players were moving way too close to the net, resulting in holes in the back line of the Tulalip defense. Out of their timeout, the Knights were able to capitalize on their coach’s advice and went on a 5-2 run to seal the game 25-22 by aiming for those holes in Tulalip’s back line.

In the 3rd game, the Lady Hawks started out hot and led by Adiya Jones serving four straight aces, took a 8-4 lead. The game was highly competitive and the Lady Hawks were playing their best ball of the match. After only giving up two points on bad serves, they were able to take a 23-18 lead.  For whatever reason though, the Lady Hawks tightened up only needing a couple points to win the game and they stopped communicating with each other. Going back to what their coach said prior to the game, if they don’t communicate and trust each then they won’t be able to pull out a victory. And that’s exactly what happened. The Lady Hawks blew their 23-18 lead and lost the game 25-27, resulting in a 0-3 match defeat.

Both matches of this road trip were winnable by the Lady Hawks if they could just learn to communicate effectively for an entire match, not just for minutes at a time, and close out the games they are leading. Now sitting at 3-6 on the season, the playoffs are still a realistic goal, but only if the Lady Hawks clean up their game.