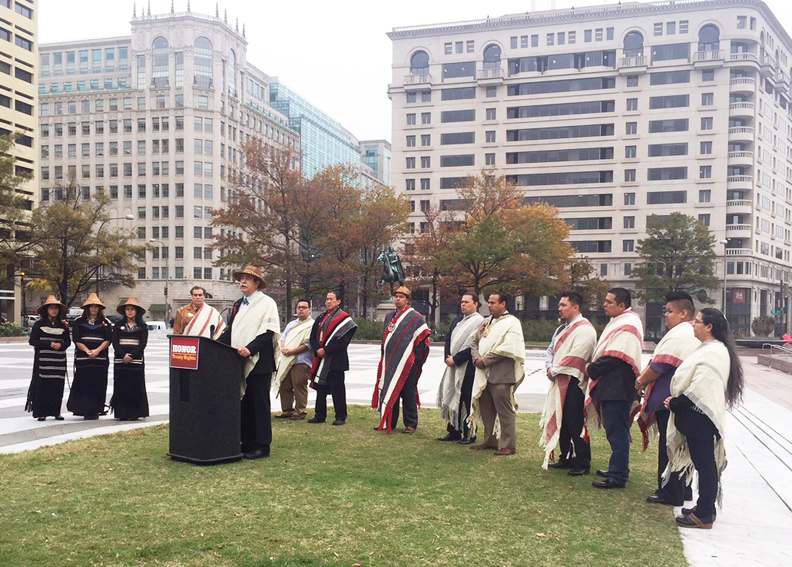 Lummi Nation Chairman Tim Ballew II and other leaders rally in Washington, D.C., on Thursday, Nov. 5, 2015, to oppose the Gateway Pacific Terminal, which would export primarily coal and expand railways. Ballew says that the project would disregard treaty rights and harm the environment. Grace Toohey McClatchy

WASHINGTON – A proposed coal terminal and affiliated railway for Cherry Point, Wash., has sparked concern about treaty violations and environmental degradation for many Pacific Northwest tribal leaders, 10 of whom rallied together in Washington, D.C., on Thursday morning against what they said is government disregard for their treaties.

About a block from the White House, three Lummi Nation sisters crooned a song referencing the 1855 U.S. treaty with Pacific Northwest Native American tribes, reserving certain rights for their fishing, hunting and sacred grounds. “What about those promises? Fills my heart with sadness, I can’t do this on my own, we’ve got to come together and be strong,” the women sang.

But Tim Ballew II, chairman of the Lummi Nation, said those rights are in jeopardy.

“All the tribes are standing here today in solidarity to protect not just our reservation community but everybody’s community from the impacts that cannot be mitigated,” Ballew said, standing in front of leaders from the Tulalip, Swinomish, Quinault, Lower Elwha Klallam, Yakama, Hoopa Valley, Nooksack and Spokane nations and the president of United South and Eastern Tribes.

The proposed Gateway Pacific Terminal, a subsidy of SSA Marine, would act as a trading hub between landlocked domestic companies and markets in Asia, said Joe Ritzman, vice president of business development for SSA Marine. The deepwater terminal would handle up to 60 million tons of commodities, primarily coal, and the project would coincide with a railway expansion.

OUR CURRENT FOCUS IS THE IMPACT ON TREATY FISHING RIGHTS, AND IT’S THE GOVERNMENT’S RESPONSIBILITY TO UPHOLD THE TREATY. Tim Balew II, chairman of the Lummi Nation

But the project’s designated land includes burial sites for Lummi ancestors and artifacts, Ballew said, and the coastal development would harm age-old fishing traditions within the tribe.

“The location of the pier will take away fishing grounds and the increase in vessel traffic would impede access of our fishermen to fishing grounds throughout our usual and accustomed areas,” Ballew said.

Washington state, Whatcom County and the federal government are reviewing the environmental impacts of the proposed export terminal and associated rail expansion, expecting to release state-local and federal environmental impact statements in 2017. The U.S. Army Corps of Engineers, which is the federal review agency, is also inspecting Native American treaty rights at play.

“Our current focus is the impact on treaty fishing rights, and it’s the government’s responsibility to uphold the treaty,” Ballew said.

The Lummi Tribe, whose reservation is minutes from Cherry Point, entered the Treaty of Point Elliot more than 150 years ago, which ensured the sovereign nation right to “fish at usual and accustomed grounds and stations is further secured to said Indians in common with all citizens of the Territory.”

JoDe Goudy, chairman of the Yakama Nation, said his tribe has faced similar treaty battles in Oregon, most recently when the governor halted a proposed coal export plant near their sacred ground and Columbia River fisheries. But now that decision is under appeal, putting their treaty rights at stake again, Goudy said.

Not only would the Gateway Pacific Terminal affect the Lummi Nation, Goudy explained, but the proposed railways would transport coal by the Yakama Nation’s portion of the Columbia River.

“This issue affects all of us, we’re connected in ways that the U.S cannot even imagine,” said Tyson Johnson, council member of Nooksack Indian Tribe.

President Barack Obama and his administration met with the tribal leaders and many more Thursday afternoon as a part of the White House Tribal Nations Conference.

“I credit the current administration for every year building on our efforts to help us rebuild our nations and I encourage them to continue that,” Ballew said. “We really want them to give this issue its due respect. It’s a human rights issue, it’s a treaty rights issue, and we need our sacred sites protected.”