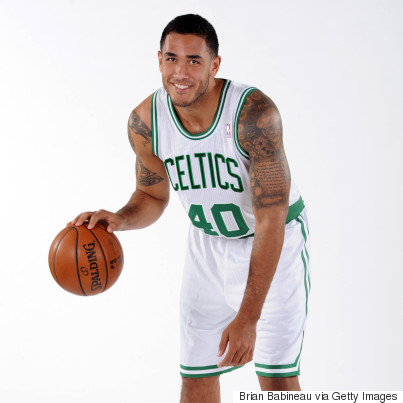 Damen Bell-Holter is used to making headlines, as the first member of the Haida Nation to ever step on an NBA floor.

Now the 25-year-old, 6’9″ gentle giant, a former member of the Boston Celtics, is making headlines of a different kind. Bell-Holter, now playing professionally overseas in Finland, is speaking out about the issue of youth suicides, which have plagued First Nations communities.

I sat down with him to find out why the issue touches home for him — and how he is taking action.

CT: Why has youth suicide become a signature issue for you?

DBH: Growing up in Hydaburg, Alaska, it was a big problem. My home life wasn’t ideal, with alcoholism and abuse and all those things. I had cousins who committed suicide. When you’re in a town that small, with only around 300 people, almost everyone’s family has been through it. It seemed like there was a suicide every year.

CT: What’s going on, and why is this happening?

DBH: When you’re stuck in small communities, that’s all you can see. You don’t really have big hopes for the future. I was extremely fortunate because I had basketball as an outlet, which was huge for me. But if you don’t have an outlet like that, there’s a lot of negativity in these small towns. And all it takes is one moment of weakness and struggle.

CT: What have you decided to do about it?

DBH: Since my sophomore year in college, I’ve been holding basketball camps for kids every single year. My goal was to give back and work with kids, and since I started doing that, I discovered what a big issue youth suicide is in so many communities. It’s a real pattern.

As a result, about 60-70 per cent of the time in my camps doesn’t even involve basketball. I talk to kids about domestic violence, about alcohol abuse, about drugs. I’ve done over 40 of these camps over the last few years, all the way from Alaska, to Haida Gwaii, to mainland B.C., to reservations in lower 48 states like Washington, Oregon and Utah.

CT: Why is it so important for First Nations kids to hear from you?

DBH: Kids in these small communities are really stubborn. If someone from the lower 48 states is talking to them, they just think, ‘You don’t know what we go through.’ But when I come and talk to them about my home-life growing up, then they realize, ‘Hey, that’s my story too.’

CT: Losing young people in this way is particularly heartbreaking. What would you say to communities going through this?

DBH: The biggest thing is to keep kids involved. Demonstrate a lot of positivity, make sure kids are coming to the gym, keep them active, and show them that you care. Some communities, like Skidegate on Haida Gwaii, are really great at that.

CT: To kids who are in a dark place right now, what would you say to them?

DBH: Your home-life doesn’t have to dictate your future and how you feel about yourself. Suicide doesn’t have to be an option. Everyone has struggles: I had thoughts of suicide when I was a kid, too. I thought there was nothing better for me out there. But if I had taken my own life, I would have affected my family and my community for generations to come. I wouldn’t be here sharing my story right now.

CT: How has the response been to your youth camps?

DBH: The great thing about native communities is that when someone does something special, everyone really comes together to support them. I’ve had so much support from Haida Gwaii, and towns like Skidegate and Masset, with people telling me they’re proud of me. Hopefully I’ll have an effect on these kids, even just a few of them, because here I am — Haida from a small Alaska town of 300 — and I’ve seen the highest levels of basketball in the world, doing things I never thought I’d have the opportunity to do.