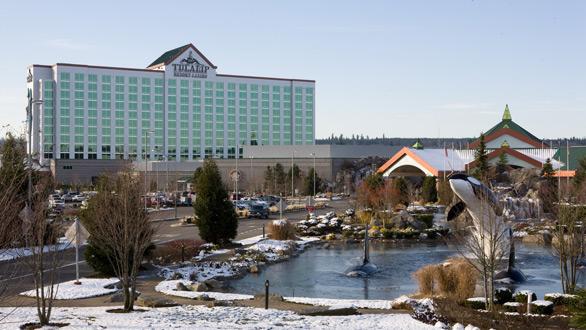 SEATTLE – Casinos operated by 22 Native Nations in Washington State generated millions of dollars in contributions to communities, non-profits, and smoking-cessation and problem-gambling programs in 2013 and 2014, according to a report by the Washington State Gambling Commission.

Staff members of the state commission presented “Tribal State Compact Tribal Contributions” to commissioners on Jan. 15. Commissioners and reporters had the opportunity that day to ride along with enforcement agents, watch gaming-machine compliance tests, and tour a forensics lab.

The mission of the gambling commission is “Protect the Public by Ensuring that Gambling is Legal & Honest,” and Native Nations with casinos help in that mission through the compact and, in many cases, with their own gaming commissions.

Contributions for 2015 were not available.

For most if not all Native Nations that have casinos, gaming is only part of a larger economic development portfolio. According to Julie Saw’Leit’Sa Johnson, Lummi, chairwoman of the Native American Caucus of the Washington State Democratic Party, Native Nations – or Tribes – are collectively the fourth-largest source of jobs in Washington state.

The Quinault Nation, owner of the Quinault Beach Resort and Casino, as well as other ventures, is the largest employer in Grays Harbor County. The Suquamish Tribe’s Port Madison Enterprises, which manages the Suquamish Clearwater Casino Resort, White Horse Golf Club, and other ventures, is the second-largest private-sector employer in Kitsap County, west of Seattle. The Tulalip Tribes town of Quil Ceda Village, home of Tulalip Resort Casino, Tulalip Amphitheater, Seattle Premium Outlets, and other dining, entertainment and retail businesses, is the third-largest source of jobs in Snohomish County.

Many casino-resorts have evolved beyond gaming and become convention, dining and entertainment destinations, as well as showcases for cultural art. Guests at the Suquamish Clearwater Casino Resort Hotel can take a shuttle to the Suquamish Museum and other cultural sites. The new Yakama Nation Legends Casino Hotel is being built a half-mile from the Yakama Nation Museum & Cultural Center.