The U.S. Army Corps of Engineers sided with Northwest tribes Monday in a decision to block the largest proposed bulk-shipping terminal in North America at Cherry Point. 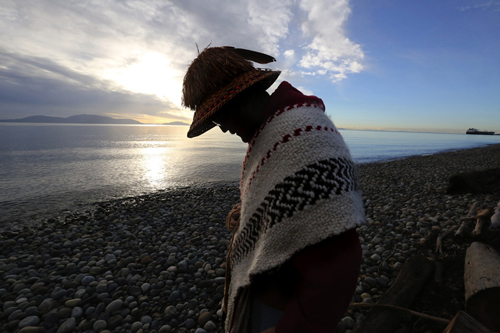 Lummi hereditary chief Bill James, on the beach at Cherry Point, says saving it is to preserve “the tribe’s very way of life.” It’s the site of an ancient Lummi village. (Alan Berner/The Seattle Times)

The Lummi Nation has prevailed in its fight to block the largest coal port ever proposed in North America, at Cherry Point.

The U.S. Army Corps of Engineers, the agency reviewing permits for the deep water port project, agreed with the tribe Monday that it could not grant a permit for a project that would infringe on the Lummi Nation’s treaty-protected fishing rights.

The 34-page decision was celebrated by community groups and tribes all over the Northwest that opposed the coal port.

The developer, SSA Marine of Seattle, declared the decision “inconceivable” and political, rather than fact-based. Bob Watters, SSA senior vice president and director of business development, said the company was “considering all action alternatives.”

But legal experts said far from outlandish, the decisionfollowed federal obligation to protect tribal treaty rights and the habitat that makes those reserved rights meaningful.

“This is based on a long line of precedent,” said Robert Anderson, director of the Native American Law Center at the University of Washington School of Law. “You can’t have a right to fish without a decent environment.”

Lummi fishing rights and the associated habitat are property rights protected against interference by states, the federal government and private parties, Anderson noted.

Tim Ballew II, chairman of the Lummi Indian Business Council called the decision “a big win for Lummi and for treaty rights and for Indian Country.” The tribe argued the project was a killer for its crab fishery and would thwart rebuilding the herring run that was once the prize of Puget Sound.

The terminal would have brought some of the largest ships afloat into the usual and accustomed fishing waters of the Lummi up to 487 times a year to load and unload bulk commodities, principally coal, bound for Asian ports.

The project touched a nerve on both sides of the border among communities fighting coal and oil transport projects — none larger than the port proposed for Cherry Point, the last undeveloped bit of shore on a deep-water cove, between a smelter and two oil refineries.

The Lummi fought the project from the start. The tribe was opposed not only to increased vessel traffic and risk of pollution from the project, but any disturbance of the site of one of its oldest and largest villages and burial grounds, upland from the proposed shipping terminal.

Promises by the developer to minimize and scale back the landside footprint of the project did not interest the Lummi, who argued the project could not be mitigated.

While SSA voiced shock at the decision, some industry analysts said it merely put a project that was never going to be economically viable out of its misery.

“This is like cutting the head off a zombie; it stopped making economic sense years ago, and now it’s officially dead,” said Clark Williams-Derry, director of energy finance at the Sightline Institute in Seattle. With coal prices in a long slide and no recovery in sight, the project had no financial future, Williams-Derry said.

“They have no market for the coal,” agreed Tom Sanzillow, based in New York as the director of finance for the Institute for Energy Economics and Financial Analysis, a nonprofit think tank. Coal-export projects are “wasting a lot of investor capital and people’s time,” he said.

The campaign against the project was hard-fought and its foes implacable. Brian Cladoosby, president of the National Congress of American Indians and chairman of the Swinomish Indian Tribal Community in La Conner, called coal “black death,” and vowed tribes would fight the project to the end.

Cladoosby said Monday, “Today was a victory not only for tribes but for everyone in the Salish Sea. I hope we are reversing a 100-year trend of a pollution-based economy, one victory at a time.”

Tribal opposition to the project from around the region was good news for citizens from Seattle to Bellingham and beyond, noted Cesia Kearns, based in Portland as deputy regional director of the Beyond Coal campaign for the Sierra Club. “Protecting treaty rights also protects everyone who calls the Salish Sea home. I feel just an incredible amount of gratitude,” she said.

Mel Sheldon, chairman of the board of directors for the Tulalip Tribes, which also have treaty-reserved fishing rights at Cherry Point, said the port would have taken away a way of life not only for those who fish, but for tribal and nontribal residents who treasure the environment. “This is a journey we are all on.”

The decision was made by the Seattle District commander, Cmdr. Col. John Buck. If in the future the Lummi withdrew their opposition, SSA Marine can restart the permitting process, the corps noted.

But Ballew made it clear that is not on the table.

“We have always made our treaty rights and protection of the Ancient Ones our first priority,” Ballew said. “And we always will.”