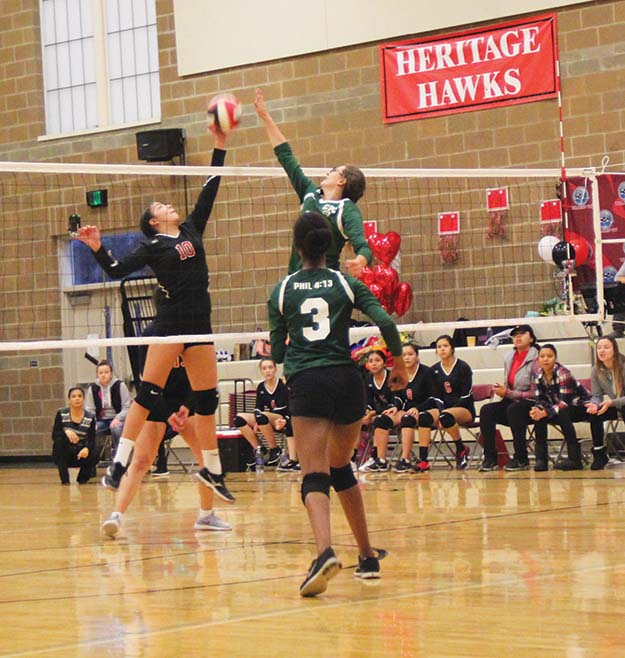 The Tulalip Heritage Lady Hawks volleyball team were coming off back-to-back losses that dropped them to a (6-4) record and 4th in the league standings last we checked in. They would get a week’s worth of rest and practice in before their next game.

On Wednesday, October 19, the winless Lummi Blackhawks came to town. As expected, the match was very one-sided. Tulalip won the 1st game 25-5. Coach Tina Brown used the 2nd game as a prime opportunity to get her less experienced girls into the game and get some reps. They showed great effort and made use of their court time, barely losing 22-25. Coach Tina went back to her starters in the 3rd game and, again, it was a lopsided 25-6 win for the Lady Hawks. The home team went on to win the 4th game 25-16 and the match 3 games to 1. Upping their overall record to (7-4).

In a quick turnaround, the Lady Hawks hit the road the following day and travelled to Kirkland to take on the Providence Classical Christian Highlanders. The Highlanders are the league’s best team, sitting atop the NW 1B standings and sporting an impressive ten-match win streak. During their dominant run only the Lady Hawks managed to give them a competitive match, when they previously played each other back on September 30.

The Highlanders were much more prepared for the Lady Hawks this time around and brought the heat early. The aggressive style of play and hard hit spikes proved to be too much for Tulalip to handle. In a decidedly quick match, the Lady Hawks got blanked 0 games to 3. It was the first time all season they failed to win a single game, dropping their record to (7-5).

Next up, Tulalip hosted the Cedar Park Christian Lions on Monday, October 24. The match was ‘Senior Night’ for the Lady Hawks, as family and friends filled the bleachers to cheer on their team.

The match started out very well for the Lady Hawks. They came out pumped up and full of energy thanks to the pre-game ceremonies. In the 1st game, they took a commanding 13-4 lead and held on for a 25-19 win. Then in the 2nd game, they played the Lions nearly point for point and grinded out a 25-23 win. Up 2 games to 0, Tulalip only need to win one more game to clinch the match victory and make a defining statement on week before league playoffs.

However, the Lions are the league’s second best team record wise for a reason. Their coaches made some between game adjustments and focused on hitting the ball to the Lady Hawks back row. After dropping the opening games, the Lions would take the 3rd game 25-22 and the 4th game 25-21. 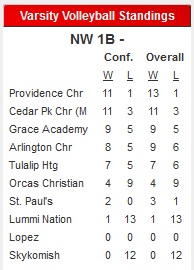 Tied at 2 games apiece, the match went to a deciding 5th game. Minutes into the clincher the score was 6-6. The Lions eventually pulled away, as the Lady Hawks made some costly miscues and found themselves trailing 9-14. They refused to give-up and took the next three points, but a bad serve gave the Lions the last point they need. Tulalip lost the 5th game 12-15 and the match 2 games to 3.

It was a heartbreaking loss for the Lady Hawks after playing so well and having a 2 games to 0 lead. Their record now sits at (7-6) on the year with two more matches before playoffs.

The District 1B playoffs will be held Saturday, October 29, at Mt. Vernon Christian High School.