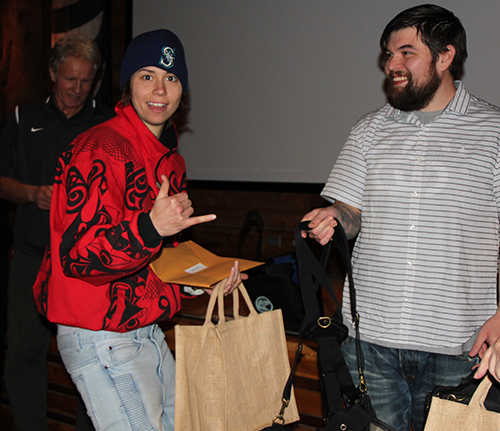 On Monday, December 12, fourteen Native students were honored with a graduation banquet at the Hibulb Cultural Center for their commitment to training for a better tomorrow. The fourteen students, six of whom are Tulalip, were the latest cohort to complete an intensive three-month pre-apprenticeship construction trades program offered by our TERO Vocational Training Center (TVTC).

As far we know, the program, which is managed by the Tulalip TERO department, is the first and only state and nationally recognized Native American pre-apprenticeship program in the country. The program is accredited through South Seattle Community College and Renton Technical College, while all the in-class, hands-on curriculum has been formally approved by the Washington State Apprentice and Training Council.

The three-month program provides curriculum that teaches a variety of construction trades and skills that can last a life time. Upon completion, the graduate’s dedication to a better future is rewarded with a wide-range of new employment opportunities now available to each graduate as they navigate the construction trades career path. In addition, students are trained and awarded certifications in flagging, first aid/CPR, and OSHA 10-hour safety training. Upon completion of the program students are ready to safely enter the construction work environment and demonstrate everything they’ve learned. 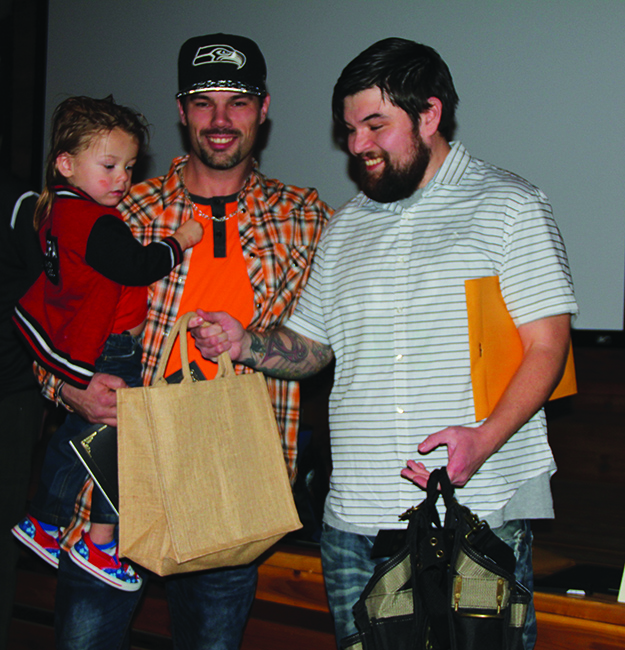 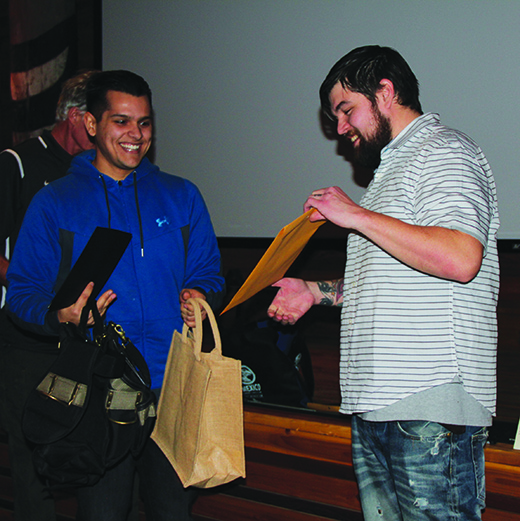 Tulalip tribal member and Rediscovery Coordinator for the Hibulb Cultural Center, Inez Bill, opened the graduation ceremony with words of encouragement and guidance.

“Accomplishing this graduation day is a great milestone for the students. They worked hard to get here. I’d like to thank them for the benches they made that will be a part of our longhouse. Also, the three tiny homes they made that will be donated to the Seattle homeless is such a good cause. The work that they’ve done is real world work and it will add to the Tulalip and Seattle communities. I raise my hands to that quality of work. The teachings and values of our work is to do things in a good way, to help and add to our community, and I think you all have met those traditional values. You have honored our ancestors by putting your best foot forward and doing the best you can. I’m truly happy to be a witness to what you all have achieved on this special day.”

Under the supervision of instructors Mark Newland and Billy Burchett, the students constructed three tiny houses for their final class project. These houses, which are approximately 120-square-feet, are being donated to homeless families located throughout the Seattle area. The insulated houses will be a major upgrade for their soon-to-be residents as they offer electricity, heat, a much safer environment and, most importantly, a measure of stability for their new residents. 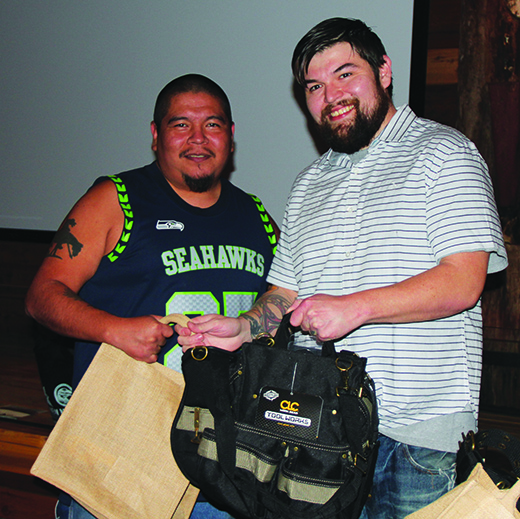 Tulalip TERO was recently awarded the ‘Housing Hero” award by the Low Income Housing Institute for donating the most tiny homes to the Seattle Homeless. Including the three to be soon delivered, Tulalip TERO has constructed and given a total of eleven tiny homes to those in most need.

The TVTC construction trades pre-apprenticeship program is a unique, nationally known model that supports tribal members from sovereign nations across the United States. The program is not dependent on tribal hard dollars. In fact, zero hard dollars are used to fund it. Instead, due to the dedication and commitment of so many individuals the TVTC program continues to grow and gain more recognition while being funded by the graciousness of the Tulalip Charitable Fund, W.K. Kellogg Foundation, Ladder of Opportunity, and the Washington State Department of Transportation (WSDOT).

Since the Fall of 2013, when TERO took over the program, 108 students have graduated the pre-apprenticeship program. Of those 108 graduates, 43 have been Tulalip Tribal members, and 11 have either been Tulalip spouses or parents. That’s 54 graduates from Tulalip and 54 fellow Native Americans from all over the region who have opted to train for a better tomorrow and complete the construction training program. 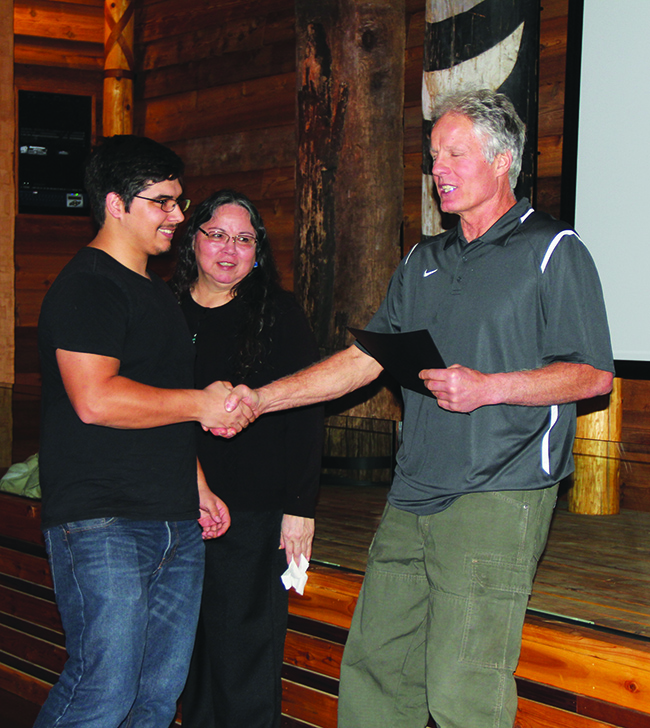 Francis Napoleon of Quinault (left) communted from Tacoma every day for the opportunity to graduate from the TERO program.

Among this graduating class are two members of the Northern Arapaho tribe. Nick Brown and Weston Shakespeare both journeyed from their reservation in Wyoming to attend the heralded TVTC class. Also among this cohort of graduates is 18-year-old Francis Napoleon of Quinault. After just graduating Aberdeen High School, Francis was informed of the Tulalip TVTC class and was determined to open up more possible career paths for his future. He packed up a few essential belongings and moved in with family just outside of Tacoma (the closest relative he had to Tulalip), and then proceeded to wake up every day at 4:45 a.m. so he could drive himself to class in Tulalip by 8:00 a.m. Following class he’d hop back in his car and drive back down to Tacoma, where he’d usually arrive at 6:00 p.m. Every day for three-months he endured a monster commute and marginal free time in order to obtain the one-of-a-kind pre-apprenticeship certification offered by Tulalip TERO.

“My immediate plans are to move back to Aberdeen and hopefully go to work for a construction company close to home,” says Francis, who had zero previous experience with construction tools prior to the class. “I’d recommend the program to any Native American. I loved it. The learning experience, the instructors, and my fellow students made it a great three-months.” 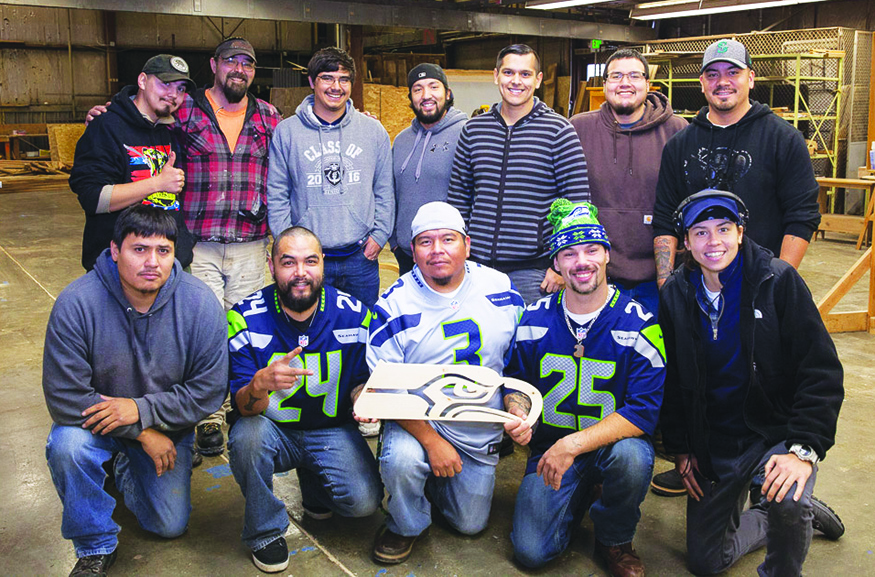