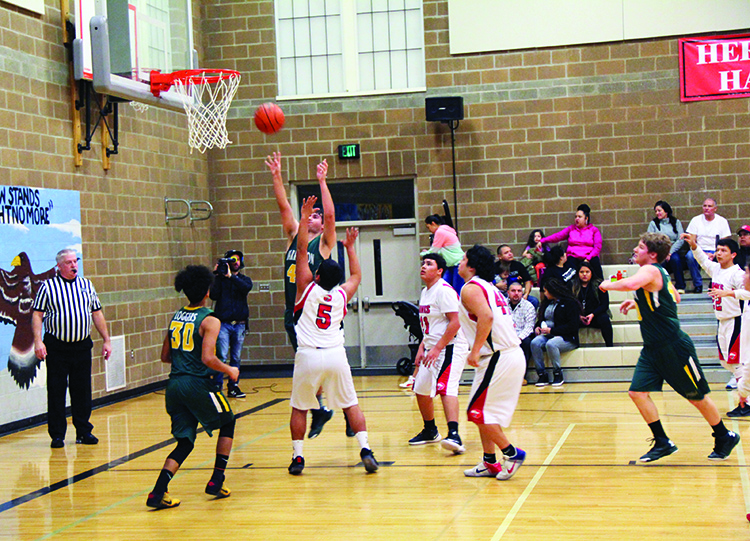 The (3-9) Tulalip Heritage Hawks basketball team were coming off a stunning loss at the hands of Orcas Christian, a game in which the Hawks led by 14-points with five minutes remaining, when they hosted the (5-4) Lopez Lobos on Friday, January 20. The boys were in a hurry to put that last loss behind them and hopefully get another much needed W.

The game couldn’t have been gone any better for the Tulalip boys. The defense was forcing many turnovers and everybody was crashing the boards. Offensively though, they were playing on a level not before seen this season. Everything was going in. The stellar shooting lasted the entire game. When it was over the Hawks had earned their most lopsided victory of the season, 80-46.

Less than twenty-four hours later, the Hawks were still basking in that huge W when they hosted the (3-11) Darrington Loggers. The game was as evenly matched as you can get with both teams being able to counter the other basket for basket. Nashone Whitebear carried the offense early on by doing damage from the elbow area and taking advantage of the zone defense. At halftime the Hawks trailed 19-23.

In the 3rd quarter, both teams came out firing. The Hawks got six more points from Nashone, five from Paul Shay, Jr. and six from Rodney Barber. All together the boys put up twenty points in the quarter to tie the game up at 39-39 with eight minutes to go.

Both teams continued to play basket for basket, each team scored nine points in the 4th quarter, and were tied 48-48 at the end of regulation. Meaning overtime was necessary.

In the OT, guard Josh Iukes shined brightest. He broke down the defense off the dribble for two baskets and was clutch from the free-throw line, converting five of six attempts. His nine points in OT was more than enough to seal the deal for the Hawks. They won 57-52. Josh’s 16 points led all scorers, Nashone added 13 points, and Paul had 10 points. The win marked two in a row for the boys, their first win streak of the season. 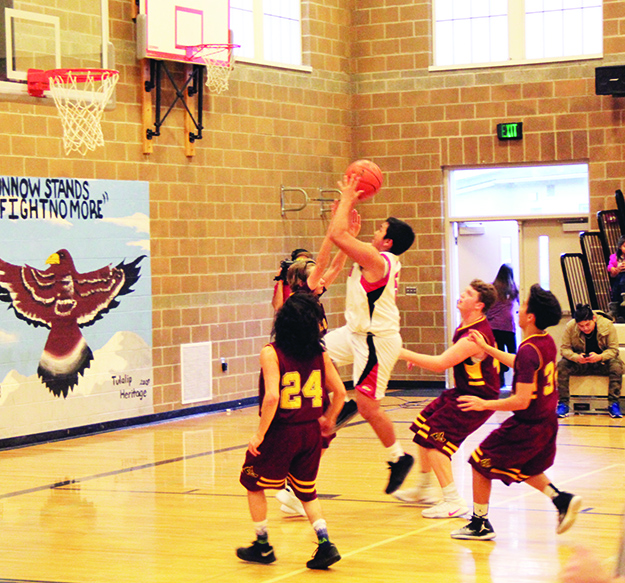 On Monday, January 23, they again played the Lopez Lobos. This time at home. The Tulalip offense came out sluggish, but luckily Samuel Fryberg was able to pick up the slack. He scored all six of the Hawk’s points in the 1st quarter to give his team a 6-4 lead.

The offense snapped out of their early funk and everyone chipped in to outscore the Lobos 45-26 over the 2nd and 3rd quarters. The Hawks led 51-30 going into the final quarter of play. When the game ended, the Hawks had secured their third W in a row 60-39. All Hawk players scored in this one with Nashone leading all scorers with 17 points, Josh Miranda and Samuel Fryberg both scored 11 points, and Josh Iukes added 10 points.

The three game win streak improves the Hawks’ record to 6-9 and breathes new life into their season. There’s now a good chance they can earn a spot in the league playoffs.