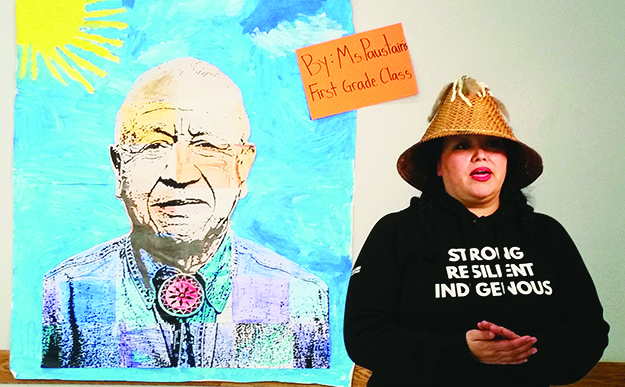 Many schools across the nation celebrate the works of beloved children’s author Dr. Seuss by hosting a spirit week each March during his birthday week. This tradition is practiced annually at Quil Ceda Tulalip Elementary (QCT.) But before preparations for this year’s Dr. Suess week began, Chelsea Craig, Tulalip tribal member and QCT instructor, suggested the school celebrated another national hero, Billy Frank Jr., whose passion for preserving fishing rights for Washington State tribes has made a positive impact for both Indian Country and the environment for generations to come. QCT celebrated by learning about the Native American activist every day during his birthday week, March 6-10.

In 1854 and 1855 the State of Washington met with several local tribes to sign treaties in order to designate land for the tribes. Each tribe received a portion of land where the state would provide schools and medical care. The treaties allowed the tribes to retain the right to hunt, gather and fish at all usual and accustomed grounds.

Ninety years after the treaties were signed, fourteen-year-old Billy Frank Jr. of the Nisqually Indian Tribe, was arrested for fishing on off-reservation land on the Nisqaully River. This was the first of over fifty arrests for Billy and ultimately led to the fish wars and the Boldt decision, a landmark court case that affirmed tribal fishing rights; subjects that were studied during Billy Frank Jr. week at QCT.

Billy actively fought his entire life not only for fishing rights but also for the environment. He served as the chairman of the Northwest Indian Fisheries Commission for over thirty years. Billy passed away in 2014 and was posthumously awarded the Presidential Medal of Freedom by President Obama. 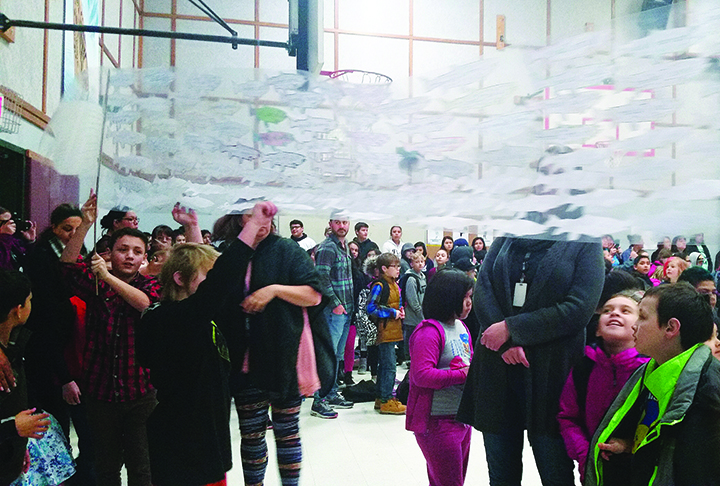 Quil Ceda Tulalip Elementary students display their school-wide art project in honor of Billy Frank Jr. The students designed paper salmon printed with their name and why they believe Billy’s work was important to Native America. Their artwork, laminated together, gave the illusion of salmon swimming upstream.

The school’s spirit week concluded with a two-hour assembly in honor of Billy, that included artwork as well as traditional song and dance by the students. Also in attendance were Billy’s son Willie and members of the Tulalip Tribes Board of Directors.

“Billy’s fight started as a battle for a right to continue to do what he and his ancestors have done for thousands of years and he went to jail many, many times fighting for that right, which is secured in a treaty with the United States. Since that time, there’s been many battles and struggles in trying to preserve that right,” explained Tulalip Board member Glen Gobin.

He continued, “As Billy got older he recognized that the fish runs were declining. He realized, it wasn’t the harvesting it was the habitat. So Billy’s focus changed, still protecting the salmon but understanding the environment and the changes that were coming. His focus changed because he knew it was going to affect the next generations.”

Salmon appeared to be swimming through the elementary gymnasium as students displayed a school-wide art project. Each student decorated paper cut-out salmon which were then laminated together, giving the illusion of fish swimming upstream. The students also remixed the B-I-N-G-O nursery rhyme to the tune of B-I-L-L-Y. The fifth grade class created a video in which they spoke of Billy’s career and legacy. During the video several students thanked him for his work, stating the battle he fought allows their family members to exercise their fishing rights, as many parents are fisherman or work in fisheries.

Willie Frank thanked the students and offered words of encouragement about environmental protection amongst massive EPA budget cuts from the Trump Administration. He stated, “My dad always said ‘tell your story’. He’s gone now so it’s up to all of us to tell our story, as Native People, about how much the environment means to us. How much the salmon and the water mean to us.”

The assembly concluded with a traditional song provided by both students and tribal members. QCT is making a strong effort on educating their students about the local Native American hero by sharing his story, a sentiment echoed by a fifth-grade student. She states, “They say you die twice. Once in the physical and then again when your story dies. We are going to make sure Billy Frank Jr. lives forever by sharing his story.”