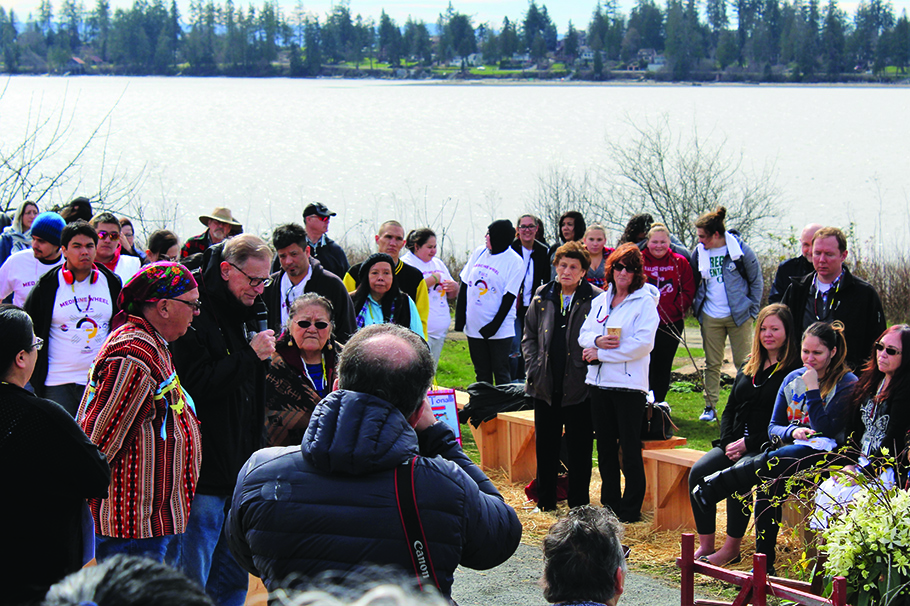 On a crisp morning in March, people gathered at the Karen I. Fryberg Tulalip Health Clinic to honor the Spring Equinox of 2017, with a blessing of the Medicine Wheel Garden by Father Pat Twohy, longtime friend of the Tulalip Tribes. Song, drumming, and thoughtful stories were shared by families, friends, youth, and elders.

Misty Napeahi, Tulalip Tribes General Manager, opened the ceremony and offered kind words about Father Twohy. “Father Pat, it is always a blessing when you are here,” she said. “I want to let you know that the Tulalip Tribes love you”.

Father Patrick J. Twohy, an honorary Tulalip Tribes member and former priest of St. Anne’s Catholic Church, has been a friend of the tribe for the past forty years. Whether it be blessings, funerals, or personal visits to tribal members, he has been an important part of the Tulalip community.

As a show of appreciation and respect from the Tulalip Tribes, Dale Jones officiated over the formal gifting of a pair of moccasins to Father Twohy. An Elders Advocate for the Diabetes Care and Prevention Program, and long-time friend, Jones honored Father Pat with a “footwashing ceremony.” This was done as an example of serving one another by “building each other up in humility and love.” A true demonstration of a servant heart.

The Wisdom Warriors, a group of elders, made the moccasins over several weeks. They were taught the traditional art of moccasin-making by Shirley Jones, member of the Yakima Nation.

The Medicine Wheel Garden is the latest effort by the Tulalip Tribes to build an integrative medicine practice. The new garden is in the shape of the well-known medicine wheel of Native American cultures. It mirrors the Four Directions, or cyclical patterns of life: the four changing seasons, the life cycle from birth to youth, adult to death, as well as the mental, physical, developmental, and spiritual states of our own bodies. 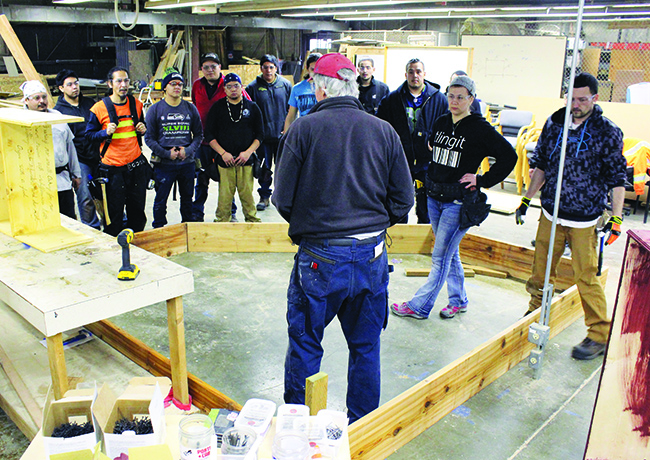 Students at the Tulalip Vocational Training Center (TVTC) created the garden boxes for the Medicine Wheel Garden. Several students worked outside in the rain, heavy winds, and mucky conditions to help configure the garden beds.  Jennie Fryberg, Health Information Manager for the Tulalip Health Clinic, stated, “All the students from TERO, we would like to thank you very much for all the work that you have done for our beautiful gardens. We thank you so much for your hard work constructing these garden beds!” 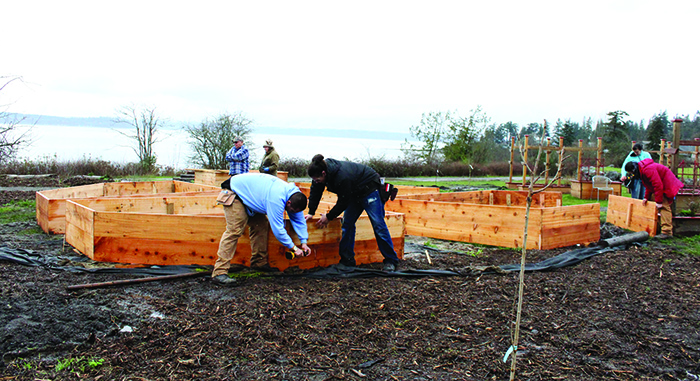 Fryberg spoke about the Tulalip Tribes Diabetes Care and Prevention Program and gave recognition to those that helped, “I want to give honor to the Diabetes Program and let everyone know that they [recently] won the Portland Area Indian Health Services Directors Recognition of Excellence Award.” She thanked each staff member of the team: Monica Hauser, Veronica Leahy, Dale Jones, Layla Fryberg, Natasha LeVee, Rose James, and Susan Adams. “Our hands are up to you for all that you have accomplished,” said Fryberg.

Jennie continued, “When Roni started the garden, she wanted to start with the Medicine Wheel Garden, so that we can take care of our people as a whole.” With the collaboration of the Behavior Health, Diabetes, and Pharmacy Clinic team, combined with the Health Clinic, these departments represent the four sections of the medicine wheel. For the tribes to take care of patients as a whole the Tulalip Health Clinic implemented its model of integrative medicine on the Medicine Wheel, a longtime vision of Karen Fryberg.

Marie Zackuse, newly elected Chairwoman of the Tulalip Tribes, concluded the ceremony, “We are on a good path to become healthy, starting with the young ones, helping our members learn about nutrition and diabetes prevention,” she said. “I want to thank all the elders, youth, students from Heritage High School, the construction training students, and clinic staff who helped make this garden a reality for our people.”

For more information about the Karen I. Tulalip Health Clinic and the Medicine Wheel Garden, please contact Veronica Leahy at (360) 716-5642 or vleahy@tulaliptribes-nsn.gov