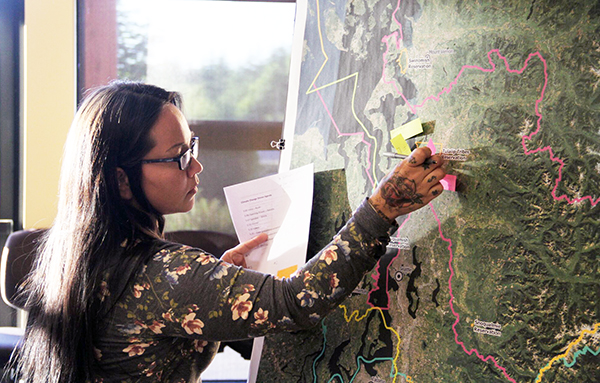 Community members share their top five climate change concerns,.Natural Resources will utilize and refer to this data while developing the adaptation plan throughout the next six months.

“We’re going to be developing strategies to preserve tribal customs and culture first and foremost.”

Countless studies have shown that since the 1900’s, the Earth’s heat has increased by about 1.33 degrees Fahrenheit. That is at an alarming rate considering that leading up to the Industrial Revolution, the planets heat only increased by about nine degrees over the span of 5,000 years.  Due to the burning of fossil fuels, excessive carbon dioxide has been released into the atmosphere over the last century. Carbon dioxide is produced by humans, animals and plants; but also by human activity such as generating electricity and using gasoline for vehicles.

Carbon dioxide traps radiated heat from the sun, at the top of the Earth’s atmosphere, causing the planet’s temperature to increase. The more heat that is trapped, the warmer the planet becomes. If the Earth’s population continues to burn fossil fuels at its current rate, over the next century, future generations will face extreme weather including draughts, floods and storms. Recent studies claim that in the year 2100, heat waves will last up to twenty days and will result in many deaths around the entire world.

Climate change is inevitable, however, many environmentalists believe the process can be slowed by means of conserving energy, utilizing other forms of transportation and recycling. The Tulalip Tribes are among the many tribal nations, environmentalists and scientists studying the cause and effect of climate change and how it will affect future generations.

Tulalip’s Natural Resource Department recently held a community dinner at the Tulalip Administration Building to discuss climate change and how it will impact Tulalip and its surrounding areas.

“It is a great honor to be here to start talking about climate change,” said Tulalip Vice Chairwoman, Teri Gobin. “We are beginning to look at what we can do to help better the environment. I really want to see us building green, utilizing solar power and really ramping up our recycling efforts and the reuse of materials. There’s a lot of things that we’re talking about, in regards to climate change, and we need to start taking those steps in the right direction.”

The community dinner included presentations by Tulalip Natural Resources Environmental Scientist, Colin Wahl, as well as guest speaker Clarita Lefthand-Begay of the Navajo Nation, who is an Environmental Professor at the University of Washington.

“Salmon is one of the major issues of climate change we’re concerned about,” explained Colin. “As Patti [Gobin] said, the Tulalips are fish people and the tribal culture really relies on fishing and maintaining the salmon populations. We’re going to have to maintain our protection and restoration strategies in the future, but we might have to adjust some of those strategies to consider how climate change impacts salmon. Some of these strategies might include things like protecting cold water habitat in streams and rivers as well as generally trying to slow the progression of climate change through policies that actually decrease carbon dioxide emissions in the atmosphere.”

Colin stated that due to the impacts from sea level rise, various areas of the reservation will experience beach loss. Areas that will be affected include Tulalip Bay, Hermosa Beach, Priest Point and the Qwuloolt Estuary. Colin used charts to compare and contrast the areas today and the same area eighty years in the future. He also explained that the Natural Resources Department is in the early stages of developing a Climate Change Adaption Plan which will take approximately six months to complete before the implementation process begins.

“We’re going to be developing strategies to preserve tribal customs and culture first and foremost,” Colin stated. “We’re also developing strategies to protect tribal property and infrastructure. We’re working with all the different departments within the administration, including Planning in particular, they’ll be an essential element throughout the process. We also need to protect and restore treaty resources, or continue to do so, so that the Tribe’s customs and culture can extend into the future.

“Historically, Indigenous cultures are very resilient in the Puget Sound area,” he continued. “The ancestors of the Tulalip Tribes, like the salmon, have adapted to the changing environments for thousands of years. This is a little more difficult now, because in the past the people could follow the species wherever they went. Since treaty times, the tribes are tied to place, tied to a reservation, tied to these legally defined boundaries. So, there might be issues with species shifts where there’s more salmon up north compared to south.”

Clarita spoke with the community before leading an open forum discussion. During her presentation she spoke in detail about the dangers of climate change, stating that by the year 2100, the earth will regularly experience extreme heat waves, air pollution as well as water and food borne illnesses. She also states that the food of future generations including shellfish, fish, meat, fresh fruits and vegetables will all be negatively affected by climate change. Clarita explained that the populations most affected by climate change will be elders, children, pregnant women, individuals with compromised immune systems as well as poverty-stricken families.

The climate change dinner concluded with an open discussion for the community to voice their concerns regarding the impacts of climate change. Clarita and the Natural Resources team wrote documented the many concerns. Following the discussion, the participants were given five post-it stickers, each a different color, and asked to rate their top five concerns. Natural Resources will utilize and refer to this data while developing the adaptation plan throughout the next six months.