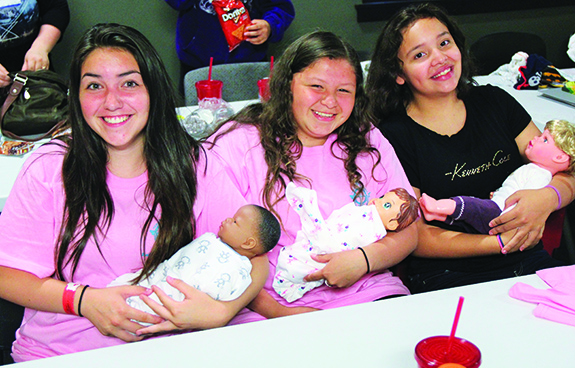 A free, daylong babysitting training class took place at the Tulalip Youth Center on Monday, August 1. Boys and girls age 11 and older learned how to perform basic child-care skills like diapering and feeding, first-aid essentials, development stages of children, helpful strategies for play activates, and the subtleties of child discipline.

An astounding thirty-eight youth showed up and participated in the daylong class. In coordination with Behavioral Health and Youth Services, the event aimed at making preteens and teenagers well-rounded caretakers was effective and made an immediate impact for several soon-to-be professional babysitters.

“We were inspired to share a class on babysitting because we wanted to focus primarily on teaching and encouraging our youth to expand their knowledge base, while teaching entrepreneurial skills to those who wished to start up a small business in the community,” states Monica Holmes, Youth Services Parapro. “Babysitting is something many kids do on a regular basis with family and close friends as they become teenagers. We wanted to arm them with the skill sets to be safe and marketable in order take their babysitting to the next step.”

Expanding the youths’ babysitting skill sets was achieved by taking advantage of those who could impart their professional knowledge on the subject, community resources who were willing to connect with the kids to make the biggest impact. Such resources included representatives from Tulalip Bay Fire and Rescue, Police Department, and Tulalip Community Health. 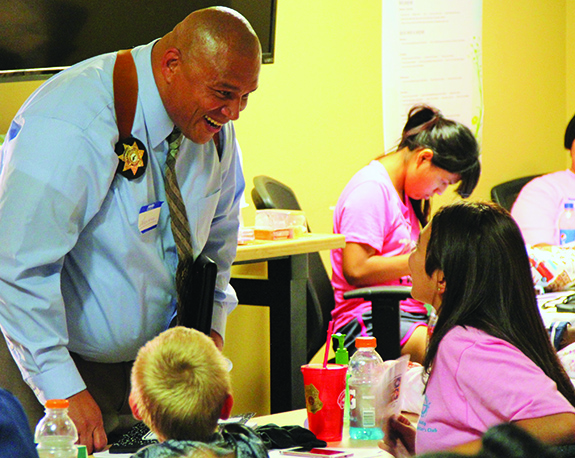 “I talked to the kids about safety in the home, as far as being a babysitter keeping themselves and the children they are supervising safe. We discussed the best practices for keeping kids safe in the home, protocol for answering the phone and what information should and shouldn’t be given out,” says Patrol Commander Sherman Pruitt, a 13-year veteran of the Tulalip Police Department. “We also went over how to stay prepared in the event of an emergency situation while keeping the safeguarding of their children the priority.”

Tulalip Bay Fire and Rescue taught basic first aid, choking hazards and in-home and personal fire safety. They also brought their ambulance and allowed participants to get in and ask questions. Tulalip Police Department spoke to youth about personal and home safety, like answering the door and telephone while babysitting, and what to do in the event of an emergency. Tulalip Community Health helped coordinate all the curriculum and hands-on teaching materials. Suzanne Carson LPN, was the co-presenter for the day and led various break-out sessions.

“We could have taught the class with just one or two instructors, but it seemed more enrichening to include these community partners. We wanted kids to learn from the best but also find people they could look up to or inspire to be like,” continues Monica. “Our community resources became mentors and positive examples in a large sense. It also helped to break down the barriers that sometimes exist between youth and organizations like the Police or Fire Departments.”

After each babysitter selected a baby doll of their choosing, complete with assigning it a gender and name, they were put into small groups. Through the course of the day, the thirty-eight aspiring babysitters rotated between different training stations set-up to replicate various real-life babysitting scenarios.

Instruction stations including the Potty Time Station, which featured all the supplies they’d need to properly diaper, change clothes and swaddle their infant or toddler. There was a First-Aid Kit Station that included supplies for basic first-aid in the event an emergency were to occur while babysitting. There was also a Babysitter’s Magic Bag Making Station, which included supplies, games, toys and arts-n-crafts items the youth could pack into a backpack and bring along with them to any babysitting job to keep their kids occupied and happy. 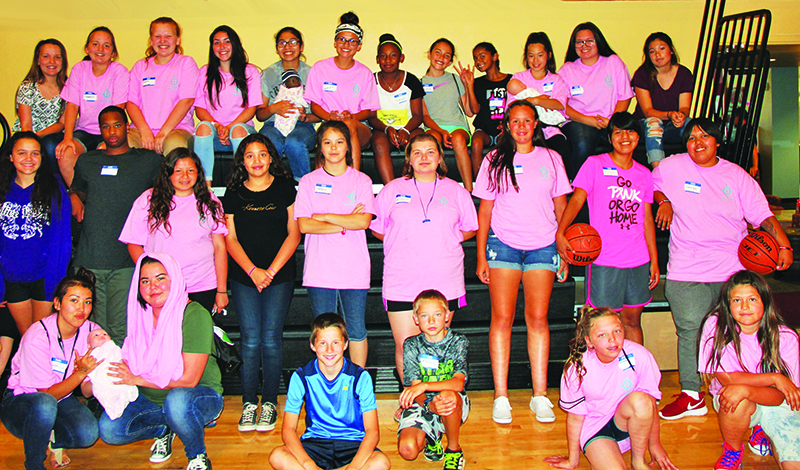 “Later in the day we designed hands-on Live Babysitting Stations where we invited community members to bring in their children ages 6-months to 10-years to be babysat by our newly minted babysitters,” explains Monica. “This is innovative to most mainstream babysitting classes in that most youth are never given a ‘trial run’ of babysitting in which staff and volunteers could observe, correct and praise their actual skills. We were so impressed with not only the maturity of the youth who attended, but also the drive and desire to take the skills they’d learned and create a real business out of them.”

At the end of the day all participating youth received a certificate of achievement and several take-home supplies to begin their very own babysitting business. Several of the youth have already developed some online advertisements for their new business. One such shining example is 11-year-old tribal member Mariana Richwine.

“I’ve been babysitting my younger sister since I can remember. Taking the babysitting class was fun and I learned a lot of tips and new information,” admits Mariana. “I learned what to do if a baby is choking and how to put a baby to sleep without being smothered by blankets. I’m more confident to babysit babies now that I know how to handle these situations.” 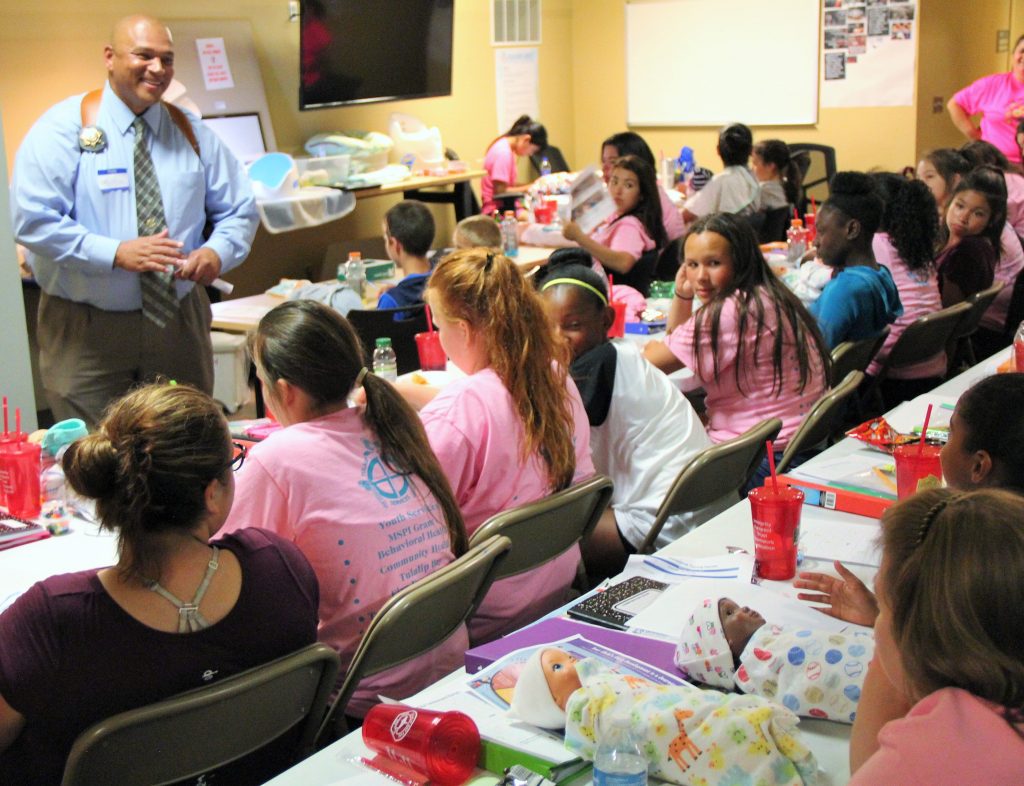 Since learning the added skills and importance of marketing herself as a certified, professional babysitter Mariana has created her own Facebook page titled Sissy’s babysitting service. She was joined in the babysitting class by her younger sister, 8-year-old Malana and older sister, 14-year-old Martelle. Their mother Nickie Richwine shared her impressions of the class she entrusted her three daughters to for the day.

“As soon as I learned about this training I knew my girls would be attending. They have always watched their little sister for me, and in the last two years my oldest ones started babysitting for friends and family. I knew there would be more they could learn in addition to their own experiences, and they did. I was happy to hear that our Tribal police and fire departments were also involved and taught the kids what to do in emergency situations. I feel like my girls are now well experienced and trained to babysit at any time.”