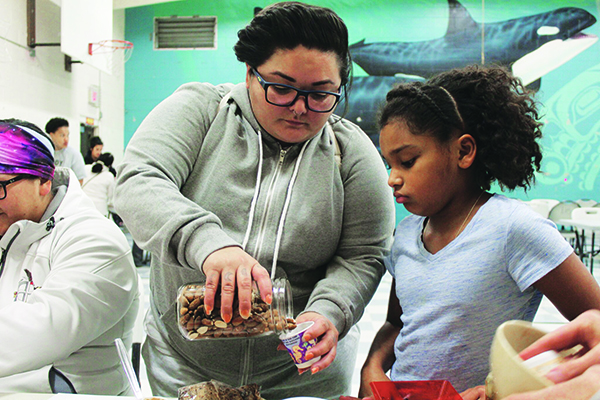 On the evening of Wednesday November 8, the Betty J. Taylor Early Learning Academy Gym was filled with excited Tulalip community members as they eagerly waited for the Traditional Foods and Medicine for the Family class to begin. The class is the second in a series of six that is hosted by the Tulalip Diabetes Prevention and Care Program. During the course of each three-hour class, attendees learn the importance of traditional Coast Salish foods such as deer, elk, berries, tea, salmon and shellfish; and also the uses of a variety of medicinal plants. The Diabetes Program assembled an all-star team to present these teachings to the people of Tulalip.

“We were really just looking for the right educators to come work with us, teachers who have the same diabetes focus but have an alternative approach to traditional types of diabetic care,” explains Diabetes Care and Prevention Coordinator, Veronica ‘Roni’ Leahy. “We know Elise Krohn, she used to work at Northwest Indian College and she worked with the Diabetes Prevention Program. A lot of community members are familiar with Elise as well as Valarie Seacrest, they started a new company called GRuB – Garden Raised Bounty. We hired her and her team to do a series of six classes for us. They touch on diabetes, but they also touch on the traditional aspect of food and the health of those foods.” 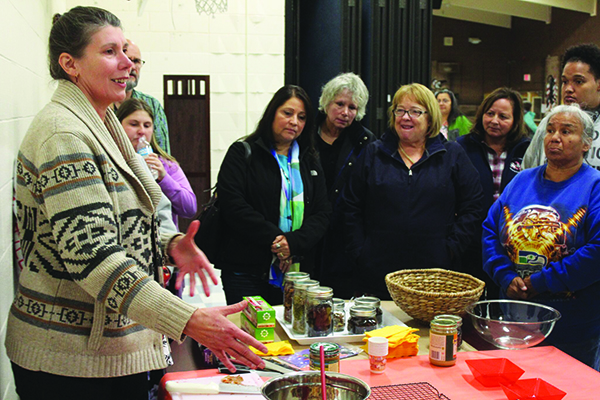 The Diabetes Program brings in the Lushootseed Department to start each class with a traditional Tulalip song and blessing. Community members are treated to a meal catered by local tribal-member owned business, Ryan’s Rez-ipes. While preparing the meals for each class, Ryan caters the menu to the class attendees who are living with diabetes. Per Roni’s request, Ryan created three homemade salad dressings, low-sugar and diabetic friendly, which were an instant crowd favorite. 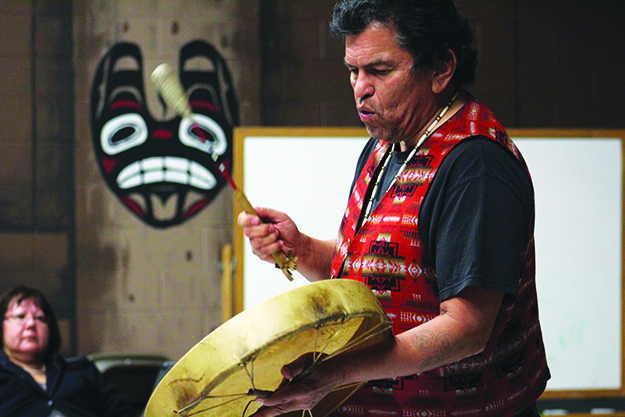 While enjoying the healthy dinner, all eyes turn to Roger Fernandez,  a storyteller from the Jamestown S’Klallam Tribe. Roger is known throughout the Northwest tribal communities for providing thought provoking stories and has also been featured at Hibulb Cultural Center. During the classes, Roger shares a handful of traditional stories which emphasize the ancestral teachings in regards to the traditional Coast Salish diet.

Following the meal, attendees have the option to indulge in dessert, such as mixed berries, while the class continues with a lesson presented by the GRuB team. Participants learn about the nutritional aspect of the day’s food and compare the modern diet with the traditional diet. The Diabetes Program ends each class with an interactive cooking demonstration in which attendees put their newly acquired knowledge to use by creating a snack and/or remedy to take home, such as herbal infused beverages, pemmican, tea and herbal infused honey. In addition to the food, including leftover Ryan’s Rez-ipes and homemade snacks, the Diabetes Program also sends a select few home with gift bags.

“The giveaways are always cooking related or health food related,” says Roni. “We weave everything together, it’s our health and it’s all connected. And part of that is teaching about feeding the seven generations; learning to live with the spirit, diversifying your diet, eating more plants, traditional and wild foods, how we cook and eat with good intention and giving back to the land. They’re not aspects a western medical clinic, even in our surrounding communities, would be teaching about. That’s what makes Tulalip and Native communities so special. We have the opportunity to talk about the land, the environment and the water. It’s really worth it to bring the people together There were four generations here tonight and that’s a really good thing.” 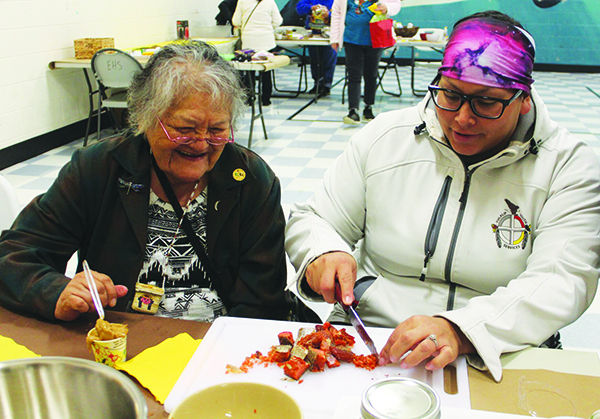 Upcoming Traditional Foods and Medicine for the Family classes will be held December 6, 13 and 18 from 5:00 p.m. to 8:00 p.m. The December 6th class is an all-day ‘train the trainer’ event where the Diabetes Program will be sharing the Traditional Foods curriculum with the teachers and instructors of the community. For more information, please contact the Diabetes Prevention and Care Program at (360) 716-5642.