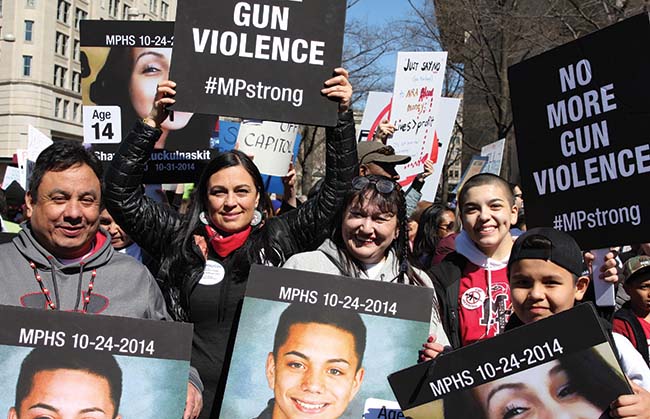 During the chilly spring morning of Saturday, March 24, a wave of warmth came over a group of twenty Tulalip community members as they navigated the streets of Washington, D.C. to join in the March for Our Lives. Reaching their destination, 12th and Pennsylvania, the group found their wave of warmth connect with a powerful tide of uncompromising encouragement and spiritual healing.

The youth-led and student organized March for Our Lives isn’t an anti-gun rally. It is an anti-gun violence and pro-gun law reform rally participated in by hundreds of thousands of students, teachers and families who marched in front of the U.S. Capital Building. Marchers demanded their lives and safety become a priority by passing legislation and school safety measures that make a significant impact on ending gun violence and mass shootings, especially in schools.

According to its mission statement, March for Our Lives is led by students across the country who will no longer risk their lives waiting for someone else to take action to stop the epidemic of mass school shootings that has become all too familiar. In the tragic wake of the seventeen lives brutally cut short at a Florida high school, the time is now to talk about gun law reform.

School safety is not a political issue. There cannot be two sides to doing everything in our power to ensure the lives and futures of children who are at risk of dying when they should be learning, playing, and growing. The mission and focus of March for Our Lives is to demand that a comprehensive and effective bill be immediately brought before Congress to address these gun issues. No special interest group, no political agenda is more critical than timely passage of legislation to effectively address the gun violence issues that are rampant in our country.

With over 600 sister marches taking place nationwide and millions estimated to have participated, the collective voice of the March for Our Lives movement was received loud and clear. More importantly, for the Tulalip group in D.C., the march yielded an opportunity to have the voice of victims and survivors of the Marysville Pilchuck High School shooting be heard. 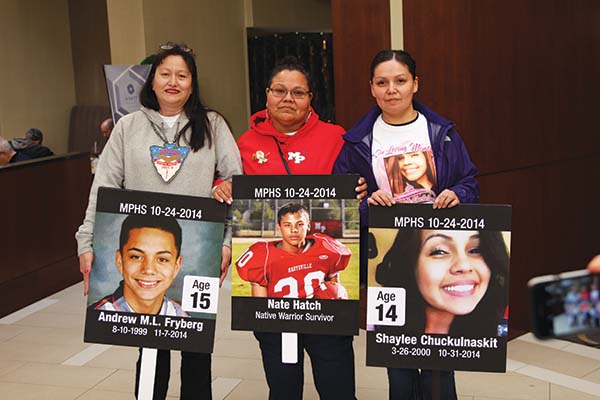 “My Andrew, along with many others taken too soon by gun violence, will have a voice today!” said Lahneen prior to the march. She shared her son’s story with a news crew where she repeatedly stated she was accompanied in the march by her angel, Andrew, and that her family couldn’t pass up the opportunity to be in D.C. to honor him.

Lavina Phillips, mother of MPHS shooting victim Shaylee Chuckulnaskit, made the D.C. trip with her children, Shania, Chaska, Keenan and Caleb. March for Our Lives was even more impactful for Lavina as it came just two day before Shaylee’s 18th birthday.

“Super blessed to be able to attend the March for Our Lives event,” said Lavina. “I was surprised when asked to attend. The dates they gave me, what it was for, then knowing Shay’s birthday is on March 26th. I took it all in as a sign from my girl…she wanted us to go, represent and celebrate her life on her birthday. I’m very thankful for everybody that was here with us and stood with us. It was a very emotional few days, but sometimes you have to let it out. Tried my hardest to hold it in because that’s what I do, but when you can’t stop the tears you have to let them flow. This whole experience was healing for my family and I’ve very proud of my daughter, Shania, for telling her story at the march. She talked to so many reporters, she wouldn’t let her sister be forgotten.”

For Denise Hatch-Anderson, mother of MPHS survivor Nate Hatch, she went through a gauntlet of emotions being her child survived the shooting, but is forever changed as a result. Surrounded by parents like herself at the march, Denise found strength and a new understanding that she isn’t alone as a parent of a mass shooting survivor.

“This whole experience has been overwhelming with emotions, but as a mother of a survivor of a school shooting, I walked away not feeling so alone in this situation,” reflected Denise on her march experience. “I had the opportunity to meet other mothers of survivors and I received some answers to question I’ve longed to ask another. My heart broke again telling the story, but in the end I grew stronger from this trip. I healed in ways I needed to and now that my son is in a place of healing I feel like this journey has made us both spiritually stronger. I can’t thank the Tribe enough, especially Theresa Sheldon for never giving up on us moms and families effected by 10-24-14.  The pain will always be there among us all, but we get stronger everyday with the help of others.” 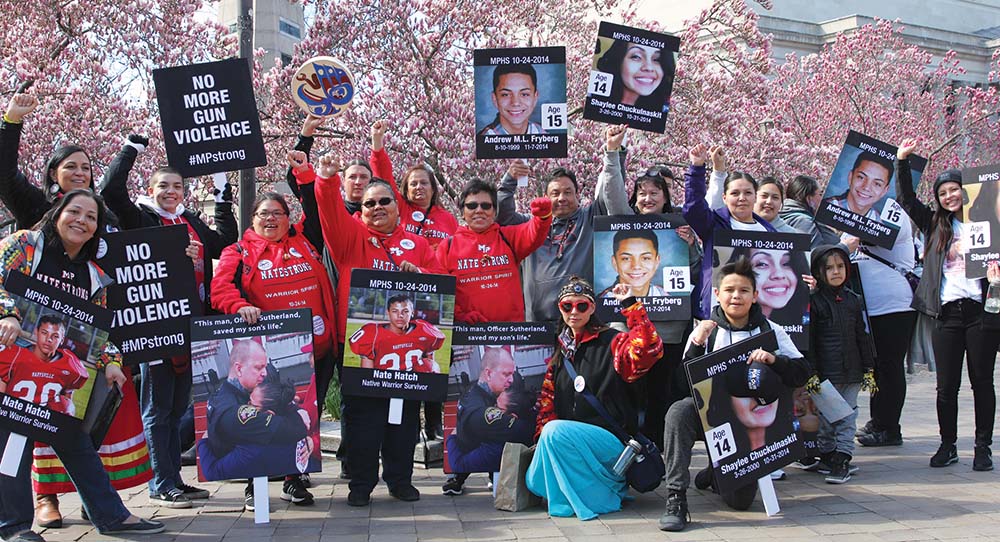 Seventeen-year-old Keryn Parks was in the cafeteria, sitting at the ill-fated table that was center to the MPHS shooting. Keryn participated in March for Our Lives in honor of her lost loves ones and to advocate for gun law reform to prevent more school shootings from occurring.

“The March for Our Lives meant a lot to me because it not only recognizes my friends and family I lost on 10/24/14, but also all the other people that have been taken from their families due to gun violence,” stated Keryn after an emotional day marching in front of the Capital Building. “The emotion and feeling from walking in the march was surreal…. I know our angels were with us every step of the way. It was such a great experience. It was heartwarming, but also so devastating.

“Our community and these families traveled all this way because they have been grieving for three and a half years. Throughout those years, shootings have occurred in schools, concerts, malls, corner stores, and clubs, everywhere really; these shootings have become normal. It hurts to know that our country hasn’t done anything to help these families heal, or these children and students around the nation feel safe, and not have to worry if someone might have a firearm. It is terrifying, but it’s the truth.”

Also the truth, the sun shined onto March for Our Lives supporters who gathered with a unifying mission to end gun violence and prevent school shootings. The Tulalip group showed such fierce strength and determination by giving voice to the victims of the MPHS shooting, not allowing their loved ones to be forgotten. 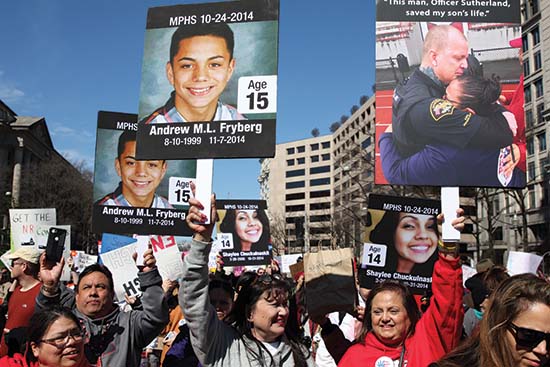 As sprits soared and healing found the hearts of those who needed it, each step taken in the march was a reminder that the truth cannot be silenced. Gun violence and school shootings are preventable. Those in power who are disbelievers in that sentiment just needed to look out their Capital Hill office windows, onto the hundreds of thousands of who demonstrated how powerful the people are when working together with common goals.

“What was beautiful to see from the youth is that they have been able to connect the dots between all the various forms of violence and not placing any sort of value hierarchy on those experiences,” said Matt Remle, Native Liaison for Marysville School District, who supported the mothers and the families during the March for Our Lives. “Their movement isn’t just about school shootings, but about addressing all forms of violence and abuse. That’s powerful. Sharing in such a truly historic occasion was good medicine for all our spirits.”