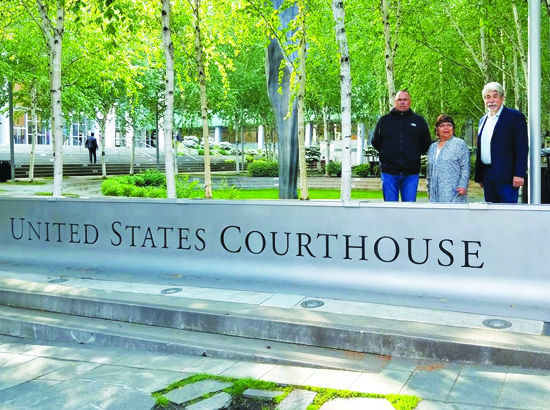 The Tulalip Tribes’ lawsuit challenging Washington State and Snohomish County’s authority to collect sales tax generated by businesses in Quil Ceda Village (QCV) has finally commenced. The bench trial, presided over by Judge Barbara Rothstein, is scheduled for 10-days and began on Monday, May 14, at the U.S. District Courthouse located in Seattle.

Moments prior to court going into session, Chairwoman Marie Zackuse stated, “The Tulalip Tribes are here today to present our case. This is about taxes generated in our own tribal municipality – built with our own resources. We are confident we have a strong case and look forward to a positive outcome.”

The U.S. federal government is Tulalip’s co-plaintiff in the legal battle against Snohomish County and Washington State. The United States claims the State and County’s imposition of taxes on commerce in Quil Ceda Village undermines tribal and federal interests, infringes on tribal self-governance, and violates the Indian Commerce Clause of the U.S. Constitution.

“The United States takes seriously the federal role in protecting tribal self-government, which has its foundation in federal statutes, treaties, and regulations,” said John C. Cruden, the Assistant U.S. Attorney General at the time the lawsuit was filed.

“The State of Washington and Snohomish County did not contribute in any significant respect to the development of Quil Ceda Village,” according to the United States complaint filed in Seattle. “Moreover, they provide no significant governmental services at the Village and they play no role in the Village’s ongoing operations.”

The State and County currently collect over $40 million in annual property, business and occupation and sales taxes on the on-reservation activities at Quil Ceda Village. Even though Tulalip has its own applicable tribal tax laws, State and County taxation, in effect, preclude Tulalip from imposing its own taxes and deprive the Tribe of the tax base needed to fund important governmental services.

During opening arguments, Tulalip’s legal team expressed that the evidence will show that Tulalip has done everything reasonable to build QCV into what it is today while working under the guidelines of the Tulalip Leasing Act and other federal statutes encouraging self-determination. Tulalip created an economic engine, only to have the tax-base they created be 100% appropriated by County and State governments. 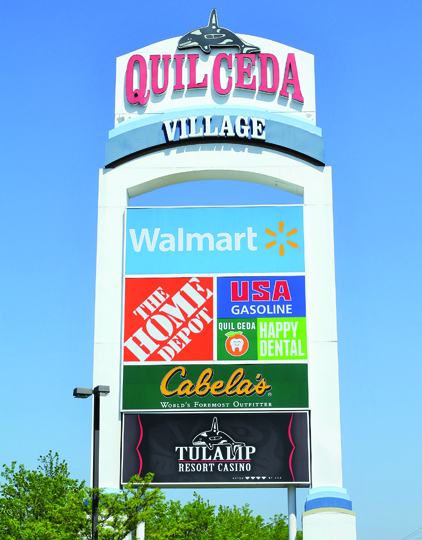 In 2001, the Bureau of Indian Affairs approved QCV’s status as a tribal municipality. Quil Ceda Village became the first tribal political subdivision in the nation established under the Indian Tribal Governmental Tax Status Act of 1982, and one of only two federal municipalities in the country, the other being Washington, D.C. As the first tribal city of its kind, Quil Ceda Village is an innovative model of tribal economic development.

The Tulalip Tribes, with support of the United States government, took what was once undeveloped land and engaged in master planning, invested in infrastructure, and created resources that benefit its tribal membership and the surrounding communities.

Quil Ceda Village is widely regarded as an economic powerhouse, located entirely on federal land held in trust by the United States for the benefit of the Tulalip Tribes. The Village contains the Tulalip Resort Casino, Walmart, Home Depot, Cabela’s, the 130 designer store Seattle Premium Outlets, and provides jobs for over 5,000 employees. QCV has fulfilled the vision of past tribal leaders who sought to create a destination marketplace on the Tulalip Reservation.

Be a witness to history

Tulalip filed suit against the State and County in 2015, seeking the right to claim the tax revenue generated at QCV. Three years later, the lawsuit is finally being heard and is open to the public. Over the 10-day federal court proceedings, Tulalip Tribes, represented by the Office of Reservation Attorney and the Seattle-based law firm of Kanji & Katzen, will seek authorization to exercise its sovereignty over the economy and tax-base, while asking the Court to instruct the County and State to cease collecting sales tax on economic activities within the boundaries of QCV.

Tulalip Tribes, et al., vs. the State of Washington, et al. is ongoing at the U.S. District Courthouse located at 700 Stewart St, Seattle, WA 98101. Tribal members who wish to show their support are encouraged to do so. The case is being heard by Judge Rothstein in room 16106 from 9:00a.m. to 5:00p.m.

“We are witnessing history in the making as the two-week hearing for our federal city, Quil Ceda Village, is underway to preempt Washington State sales taxes within our sovereign lands,” said former Board of Director Theresa Sheldon. “It’s important to acknowledge that it has taken decades of work for us to get to this point. The efforts of so many past tribal leaders and QCV employees helped carry this vision forward.”