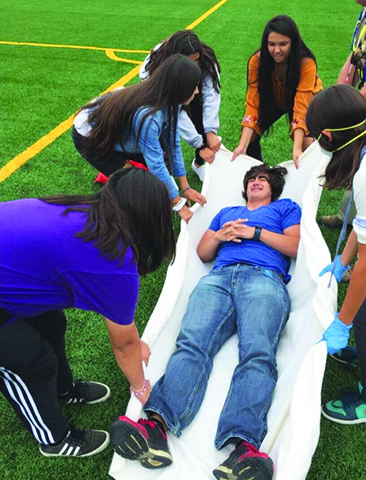 The first ever tribal Teen Community Emergency Response Team (CERT) training was held in Tulalip during the week of July 16-20. The Tulalip Office of Emergency Management reached out to the Federal Emergency Management Institute (FEMA), Critical Ops and Tulalip Youth Services to bring the trainings to the community. Teen CERT teaches the younger generation how to be adequately prepared for when a disaster strikes so they can help assist the elders, children, injured adults and expectant mothers while the professionals make their way to the reservation. Forty young adults attended the week-long training, thirty-four participants from Tulalip as well as six participants from the Quinault Indian Nation.

As the saying goes, disaster is waiting to happen. Around the globe people are experiencing natural disasters at an alarming rate such as wildfires, floods, earthquakes, hurricanes and a variety of storms (rain, wind, snow, thunder). In fact, according to a study conducted by the Environmental Defense Fund, many of these occurrences are happening due to climate change caused by mankind and shouldn’t be considered ‘natural’ disasters at all. In the United States alone, three hundred and sixty-two deaths were attributed to extreme weather and climate disasters in 2017. Over the past few years, the state of Washington has also seen its fair share of climate disasters including the Oso landslide, springtime snow storms, summertime wildfires and the fall/winter windstorms.

“When the windstorms come in September, October, November and trees topple over, we are disconnected from Marysville and other neighboring cities,” says Ashlynn Danielson, Tulalip Emergency Preparedness Manager. “We have a few ideas of how to create access, move brush and trees off the road but in the meantime we want to self-preserve and have a shelter in place. FEMA has not provided onsite trainers in Indian Country for a Teen CERT. Tribal Teen CERT has been asked about but has not been a project of this scale. We are kind of the showcase piece which makes everything very exciting.” 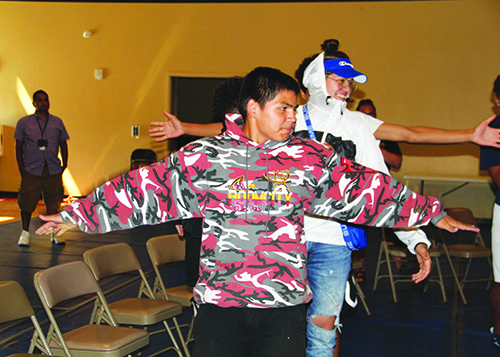 Teen CERT is offered to youth across the nation in a number of communities and teaches students how to react and respond in emergency situations. The trainings cover everything from fire safety, medical operation and triage, team organization, utility control, damage assessment as well as search and rescue.

“Just the thought of being there for my community in a time of need seems something like I could be really good at because I want to help,” expresses young Tulalip tribal member, Evalea Cortez. “I love learning something new. Eventually our parents and all the adults won’t be around forever and if there’s a disaster they’ll be busy helping out others so why not get the training to help them out. I feel like CERT really shows how important it is to be involved with your community and look out for each other.”

The kids had a blast throughout the week and learned how to properly suppress small fires using an extinguisher and participated in an earthquake emergency drill. The Greg Williams Court appeared to be turned upside after a big quake. A few students were given roles and had to act as though they were at the gym when the earthquake occurred which resulted in a certain injury. The other CERT trainees waited outside and entered the gym after the earthquake and it was their job to correctly assess their classmate’s injuries and treat any immediate lesions until the medical and emergency response teams arrived. The students had also learned how to apply makeup to make it look as though they had a number of injuries, such as cuts and bruises. Kids then learned how to inspect their neighborhoods for extensive damage and how to fill out full detailed reports for the proper authorities.

The Tulalip Office of Emergency Management offers CERT Trainings twice a year to the adults of the community. CERT trainings are highly interactive and require over twenty hours of class participation. Because Teen CERT required forty participants, Tulalip reached out to other tribes to complete their enrollment requirement. Six members of the Quinault Indian Nation accepted Tulalip’s invitation and journeyed north for a week of fun, hands-on safety experience.

“I thought it would be interesting to learn about the first response trainings and get certified for CERT,” says Quinault member, Johnny Law. “I think it’s important because it helps you feel more attached to the land, to our land, and know how to take care of it and our people when a disaster happens. I hope to bring a better understanding to where I’m from just in case there’s an earthquake or tsunami because that would devastate everything down there.”

Tulalip also incorporated another training within the CERT classes that focused on cultural resiliency, teaching the kids the importance of traditional and family values. Jay LaPlante, FEMA Tribal Relation Specialist taught the kids about the medicine wheel and the importance of self-care and community involvement.

“CERT itself is a three-day training and focuses on emergency response,” says Jay. “The reason I added the two-day cultural resiliency wellness training is because our people learn best when we have some type of relationship established. This training helps break down barriers, get to know themselves a little better and get centered with their own values. We always try to connect what we do today with what our ancestors wanted for us and also with the future generations. So we want to make sure these young people know that their ancestors were thinking about them hundreds of years ago so they can connect with what their ancestors wanted and live by those values.”

“We learned about the medicine wheel today,” states Tulalip tribal member, Kaiser Moses. “So that’s spiritual, mental, physical and emotional and that’s really important to factor into your daily life. They teach you fundamental things like how to take care of yourself and your neighbors. I signed up for CERT because I want to learn how to react in an emergency. I feel like after this training, I’ll be more prepared in the event of an emergency and that’s really reassuring.”

All forty students completed the trainings and are now certified CERT members. The Tulalip Office Emergency Management hopes to continue to offer Teen CERT after a successful first year and inspire other tribes to bring the trainings to the youth of their communities.

“As Native people we are very resilient, very community based and likeminded,” says Ashlynn. “The importance of bringing Teen CERT and the cultural resiliency trainings to the reservation is because it helps us self-identify with our culture. Ultimately, we want them to be able to provide for each other and their families and know where to go in the event of an emergency and how to get to those critical supplies. At the end of the day, our end goal is that we can take all of our information and replicate it for other tribes and help all of the tribal nations become more resilient.”