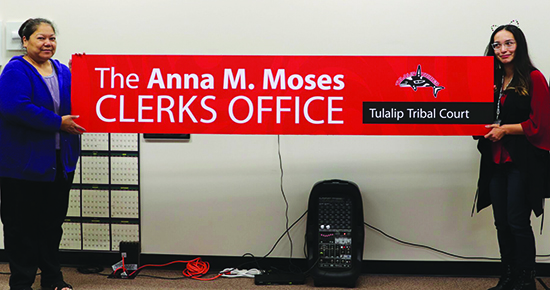 f-the-year retreat, the Tulalip Tribal Court surprised tribal member Anna ‘Annie’ Moses on the morning of December 14. In one of the Justice department’s courtrooms, a large sign was revealed before the eyes of Annie and her co-workers that read, ‘The Anna M. Moses Clerks Office’. The sign will be featured directly above the clerk’s office windows and her efforts will be recognized by tribal members for generations to come.

“It makes me feel wonderful,” Annie ecstatically expressed. “I’ve been working for the court for about twenty-eight years and worked for the tribe thirty-three years. When we first started, we had court once a month and we just got bigger and bigger. It’s been a great honor and I’m just proud to be a part of it.”

Interim Tribal Court Director, Alicia Horne, states the courthouse wanted to show their gratitude and thank Annie for her years of service, stating her work was pivotal in the Justice department’s evolution.

“The clerk’s office has been going strong since the early nineties and Annie’s been a big part of that,” says Alicia. “She’s been here for many years and has seen the court grow and change over the years. It’s good to honor our people while they’re present. It’s become tradition for a lot of tribes to honor our people for their dedication, passion and profession. Annie’s name and the clerk’s office will become synonymous because of her work, and she’ll continue to be remembered for it for years to come.”