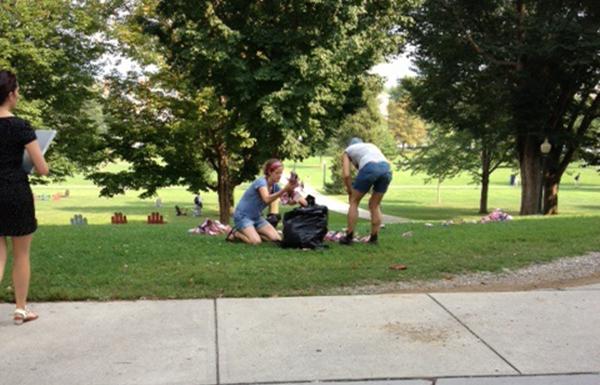 Yesterday afternoon, on the 12th anniversary of the 9/11 attacks, a group of five protesters disrupted a memorial to the nearly-3,000 killed in order to draw attention to historical injustices done to Native Americans.

The incident occurred on the campus of Middlebury College, in Middlebury, Vermont. As has become a tradition at the school, a group of students from the school’s College Democrats and Republicans commemorated the loss by planting 2,977 flags, one for each victim of the attacks, on the lawn in front of the school’s Mead Memorial Chapel. Just before 3 PM, five individuals began pulling the flags out of the ground and putting them into garbage bags.

When questioned by students, protesters said they were acting on behalf of the Abenaki people, according to Middlebury campus student blog middbeat.org.

Later, one of the five people, and the only one who is a Middlebury student, stepped forward to explain the action. Anna Shireman Grabowski issued a written statement that reads, in part:

My intention was not to cause pain but to visibilize the necessity of honoring all human life and to help a friend heal from the violence of genocide that she carries with her on a daily basis as an indigenous person. While the American flags on the Middlebury hillside symbolize to some the loss of innocent lives in New York, to others they represent centuries of bloody conquest and mass murder. As a settler on stolen land, I do not have the luxury of grieving without an eye to power. Three thousand flags is a lot, but the campus is not big enough to hold a marker for every life sacrificed in the history of American conquest and colonialism.

Shireman Grabowski, who is not Native, went on to concede that this was “not a productive way to start a dialogue about American imperialism” and that she is grappling with her “complicity in the overwhelming legacy of settler colonialism.”  You can read her full statement at middbeat.org.

The friend to which Shireman Grabowski referred was Amanda Lickers, Onondaga, who was on campus for a workshop on settler responsibility and decolonization. “Lands where our dead may lay must not be desecrated,” Lickers said, according to a release from Indigenous Action. “In my community, we do not pierce the earth. It disturbs the spirits there, it is important for me to respect their presence.”

Middlebury president Ron Liebowitz issued a statement condemning the action and stating that a disciplinary investigation is underway. “There is always something to learn from differences of opinion,” he wrote. “In this case, the disrespectful methods of the protesters overshadowed anything that might have been learned from the convictions they claimed to promote.”