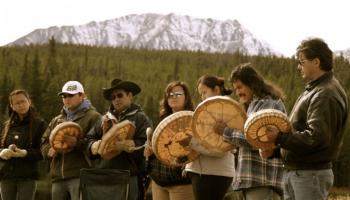 The Supreme Court of Canada’s ruling ends a long history of denial and sets the stage of recognition of Aboriginal title in its full form. Rejecting the BC Court of Appeal’s impoverished view of title as specific, intensely used sites is a step towards true and lasting reconciliation for all First Nations. The Tsilhqot’in Nation has worked tirelessly with many organizations to make this a reality.

“We take this time to join hands and celebrate a new relationship with Canada. We are reminded of our elders who are no longer with us. First and foremost we need to say sechanalyagh (thank you) to our Tsilhqot’in Elders, many of whom testified courageously in the courts. We are completing this journey for them and our youth. Our strength comes from those who surround us, those who celebrate with us, those who drum with us” said Plaintiff, Chief Roger William of Xeni Gwet’in.

Xeni Gwet’in Chief William states, “First Nations across this country have taken legal action, entered into treaty, practiced their language and demonstrated use of the land and through this they have supported us – we thank you. Non-First Nation organizations and First Nation organizations are adamant in helping us and we are grateful. We are especially grateful for the support we received from our neighbors, the non-Aboriginal residents and businesses in the title area, who intervened before the Supreme Court of Canada to say that they welcomed a declaration of Aboriginal title. These organizations have been interveners and in general support – sechanalyagh.”

“Under our own laws and teachings there is no question that these are our lands. This is the end of denying rights and title. We met the legal test in 2007 and that should have been the end of it. This decision will bring much needed certainty for First Nations, government and industry. This case is about us regaining our independence – to be able to govern our own Nation and rely on the natural resources of our land. We are ready to move forward in this new relationship with government and industry. That work starts today” said Chief Joe Alphonse, Tl’etinqox Government, Tsilhqot’in National Government Tribal Chairman.

Grand Chief Stewart Phillip, President of the Union of BC Indian Chiefs stated “amazing, absolutely amazing! Thank you Tsilhqot’in for your courageous leadership, temerity and relentless tenacity! The Supreme Court of Canada completely repudiated the greatly impoverished and highly prejudicial positions of the BC and Federal governments which formed the basis of the BC Court of Appeal decision. As parties supporting the Tsilhqot’in in this case, we worked collectively to ensure the Supreme Court of Canada would understand that recognizing Indigenous Title and Rights do not diminish Canadian society, it enriches it. Let us celebrate this momentous and historical victory!”

BCAFN Regional Chief Jody Wilson-Raybould stated, “This decision is a game changer. The court has clearly sent a message that the Crown must take Aboriginal title seriously and reconcile with First Nations honourably.” She continued, “The decision is an opportunity to truly settle, once and for all, the land question in BC – where our Nations are not simply making claims to the Crown under an outdated federal policy but where there must be true reconciliation based on recognition and where the outcome of negotiations is certain. On behalf of the First Nations in British Columbia, heartfelt congratulations to the Tsilhqot’in people.”

This decision needs to be acknowledged as a positive step forward in reconciliation between the government and First Nations. Resolving Aboriginal title reduces conflict, creates the opportunity for respectful relations and ends an era of denial. We stand in solidarity with all other First Nations and Indigenous people globally in the necessity of resolving land claims and moving forward.

APTN National News
OTTAWA–The Supreme Court of Canada has granted a declaration of Aboriginal title to the Tsilhqot’in over 1,750 square kilometres of territory in a historic ruling handed down Thursday.

This is the first time the high court has ever granted a declaration of Aboriginal title to a First Nation. The ruling also acknowledges Indigenous nations can claim occupancy and control over vast swaths of land beyond specific settlement sites, provides more clarity on Aboriginal title and sets out the parameters for government “incursion” into land under Aboriginal title.

The ruling also hands a final victory to the Tsilhqot’in Nation, which encompasses six communities with a population of about 3,000 people, over British Columbia in a long-running battle, which included blockades, over logging permits in their claimed territory.

“I would allow the appeal and grant a declaration of Aboriginal title over the area at issue, as requested by the Tsilhqot’in,” said the unanimous ruling, written by Chief Justice Beverley McLachlin. “I further declare that British Columbia breached its duty to consult owed to the Tsilhqot’in through its land use planning and forestry authorization.”

British Columbia and Ottawa both opposed the Tsilhqot’in claim to title.

The Supreme Court blasted the B.C. Court of Appeal, which had overturned a lower court ruling on what territory the Tsilhqot’in could claim under Aboriginal title. The high court found the Court of Appeal’s definition of occupancy too narrow.

“There is no suggestion in the jurisprudence or scholarship that Aboriginal title is confined to specific village sites or farms, as the court of appeal held,” said the ruling. “Rather, a culturally sensitive approach suggests that regular use of territories for hunting, fishing, trapping and foraging is ‘sufficient’ use to ground Aboriginal title.”

The high court said that Aboriginal title could be declared over territory “over which the group exercised effective control at the time of assertion of European sovereignty.”

Tsilhqot’in Nation Tribal Chair Joe Alphonse called the ruling “amazing” and said it marked the beginning of a “new Canada.”

“It sends a strong message to all provincial leaders and Stephen Harper to deal with us in an honourable and respectful way,” he said.