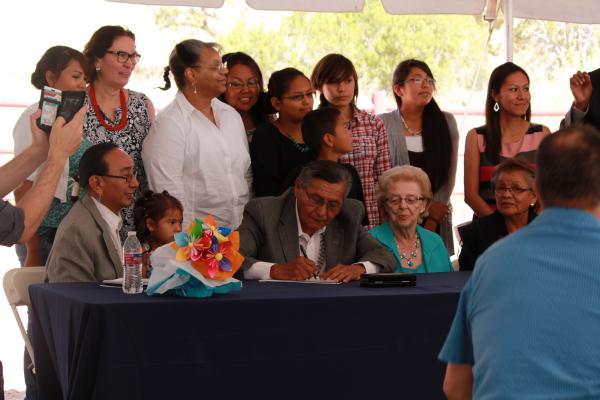 Window Rock, Arizona—On Friday, June 27, the Navajo Nation made an historic pact with the U.S. Department of of Health and Human Services to execute a direct funding agreement through the Title IV-E program under the Social Security Act that will reimburse the tribe and its child welfare agencies for federally eligible foster care, adoptions and guardianships.

The reimbursements cover maintenance, including room and board; administration, including determination of Title IV-E eligibility, placement of the child, development of a case plan, and other administrative duties under the act; and short- and long-term training for the tribe, including child welfare agencies and court personnel. Title IV-E reimbursements are open-ended and are not a grant, according to the DHHS.

The Navajo Nation tribal jurisdiction covers three states: New Mexico, Arizona and Utah, but if a child was placed into state care, each of those states made the eligibility determination and placed the child. Meanwhile, the tribe’s social workers had to plead with each of the three states to return the child to the Navajo jurisdiction to be placed with one of its licensed foster homes. Additionally, the tribe only received funding from the state of New Mexico. Arizona and Utah did not provide Title IV-E reimbursements to the tribe.

Through this agreement with the U.S. Administration for Children and Families, however, the Navajo Nation will now make its own eligibility determinations and home placements within its jurisdictional borders in all three states and receive federal funding to assist the foster families to help in taking care of its own children. In qualifying for this direct funding agreement, the Navajo Nation is setting a national precedent for other tribes to follow.

“The Title IV-E is a model program for other Indian tribes throughout the United States,” said Sharon Begay-McCabe, director of the Navajo Nation Division of Social Services. “Because tribes have an input on how their program will be administered and [how to] incorporate their tribal culture into the plan.  Native Americans, including Navajo, believe that children should be raised within their immediate family or within their Indian tribe. The family bond Navajo is their matrilineal clan system and families can exercise these traditional customs by keeping the children in kinship and permanent placement.  Our children are the future leaders of our tribes and we must continue to hold them sacredly and keep them safe.”

Begay-McCabe, said that the tribe had been working since 2011 to qualify for the federal funding with a $300,000 planning grant. According to tribal officials, Title IV-E is an annual appropriation with specific eligibility requirements and fixed allowable costs for uses of funds. In fiscal year 2010, the direct funding provision was made available to Indian nations, tribal organizations and tribal consortia with approved plans to operate the program. The Navajo Nation is the first tribe to qualify for the funding.

“The Navajo Division of Social Services requested a one year extension and used its own resources to complete the Title IV-E plan, including the assistance from the Casey Family Foundation,” said Begay-McCabe. “Once the Title IV-E plan was submitted for approval, it took additional time to finally obtain the approval from DHS.”

“The Navajo Division of Social Services is the first tribal program in the country to administer the Title IV-E program,” said Navajo Nation President Ben Shelly. “I commend Sharon McCabe and her staff for making this possible. Our kids are important and we must do everything we can to protect them.”

Tribal officials said the program is set to go into effect on October 1, 2014. Until that time, the tribe’s Department of Family Services will begin trainings, which will include the Navajo Nation Courts and other tribal programs that will cover eligibility requirements for the children and families receiving Title IV-E and the requirements of language in the courts’ rulings.

Currently, the tribe only receives funding for six children, but the new program could impact up to 200 Navajo children currently in foster care, said Begay-McCabe.

“Title IV-E enhances tribal sovereignty, [because] the Navajo Nation will receive direct funding from the federal government,” said Begay-McCabe “Before, the Division had to work with the three states – Arizona, New Mexico and Utah – individually to receive Title IV-E. The Division had to follow the process of eligibility, which differs in each state and was not culturally sensitive. Now, the Division will administer the whole Title IV-E program for the tribe, [which] will keep our children safe, provide permanency, and incorporates Navajo culture that will enhance our tribal sovereignty.”

U.S. Department of Interior Secretary Sally Jewell, State of Oregon Governor John Kitzhaber, State of California Governor Jerry Brown, Oregon Senator Ron Wyden, Oregon Senator Jeff Merkley, Klamath Tribes elected officials and Klamath Basin irrigators held a “celebratory” signing of the Upper Klamath Basin Comprehensive Agreement last Friday at Collier Park, 4 miles north of Chiloquin.  With strong support from Senator Wyden, he stated “I am going to introduce in the first few days of May, legislation in partnership with Senator Merkley to make this agreement law.”
But the “celebration” was not held without opposition.  Members and descendants of the Klamath, Modoc and Yahooskin tribes came together to object to the UKBCA stating that tribal membership had less than a month to review the 93 page document. Tribal Council only allowed 19 days from the mailing of the ballots by the election company to the deadline for return.

Although their addresses are current and updated, a large portion of membership either did not receive a ballot or did not did receive a ballot in time to cast a vote before the deadline. Therefore, membership feels proper voting procedure was not implemented and they did not have adequate time to make an informed decision in the referendum vote, which had a deadline of April 9th 2014 postmarked by 9 am.

“To me this is a violation of the code of ethics that the Tribal Council signed at the beginning of their term. They showed no moral principal with this act. I hope they can live with themselves after they have ignored their membership.” – Anonymous Klamath Tribal member

Tribal members also stated that this agreement does not reflect the cultural values that they would like to see included in any agreement that brings their Treaty rights into discussion. Tribal membership did not have any direct involvement in the negotiation process and feel that Klamath tribal elected officials do not retain the sovereign authority to make decisions on behalf of the entire tribal membership.

Those in opposition to the agreement held signs stating *“water is life”, *“no more KBRA lies” and “my council does not speak for me.”

As signatories took their place to sign the agreement, tribal members moved to the front of the crowd to deliver a written testimony and to publically state why they were not in agreement with the proposed piece of legislation.

While the signing took place, a Klamath Tribes descendant burned a copy of the UKBCA to symbolize tribal membership’s disdain for the agreement.  Tribal members were not given adequate time to make an informed decision and less than one third of eligible voting membership cast a ballot to grant signatory authority to Klamath Chairman Don Gentry. Many believe as a result, the outcome of the referendum is not reflective of overall enrolled members’ opinions, and therefore is inconclusive.

A statement released by the Hupa Tribe from Northern California criticizes the agreement stating it “surrenders their tribal rights for water and fishing.” Commissioners from Klamath and Siskiyou County were not in attendance, though they will be impacted by any agreement on the Klamath River.   They say they consider this a “surrender” or a “sell-out.” 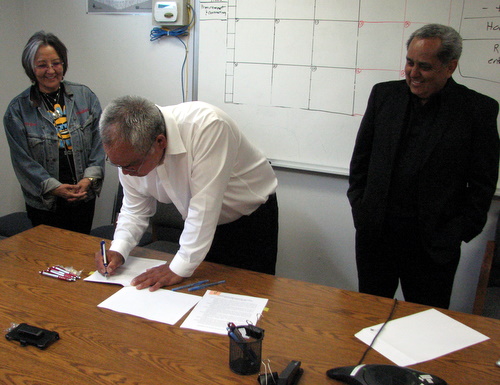 Sealaska and the Sitka Tribe have reached an agreement on the management of Redoubt Lake Falls — when, and if, the property is ever conveyed by the federal government.

Representatives from both organizations met in a signing ceremony Friday afternoon (6-14-13) in Sitka.
Listen to iFriendly audio.
Redoubt Falls lies about 17 miles southeast of Sitka. It’s home to the largest subsistence dipnet salmon fishery in the area.

Sealaska selected the few acres around the falls 38 years ago, under rules spelled out in the Alaska Native Claims Settlement Act, or ANCSA.

Former state Sen. Albert Kookesh is chairman of the Sealaska board.

“This is a process set up by the United States government to allow us to get control of our sacred sites. It doesn’t work very well.”

Still, there has been some movement recently on the Redoubt selection. A Bureau of Land Management survey of the property was done in 2011. And the trustees of Sheldon Jackson College filed a color of title claim, saying some of the area had been deeded to the school, following the sale of Alaska from Russia to the United States.

Kookesh regarded the Sitka signing ceremony — which has no effect whatsoever unless the BLM conveys the land to Sealaska — as a demonstration of Sealaska’s intention to keep sacred tribal lands under the control of local tribes — if not in their ownership.

He told the small audience gathered in the Sitka Tribe conference room that corporate ownership was the only tool available to tribes to regain control over traditional lands.

“We really want to make sure that the Sitka Tribe, and other tribes, understand that we don’t want to own it. But by circumstances we have to own it — we’re the only train left at congress that management of sacred sites can come to.”

Corporate ownership of public lands — particularly at a major sockeye run — has been polarizing in Sitka.

Sealaska vice-chair Rosita Worl repeated a theme that the corporation has emphasized at public meetings on the issue: ANSCA guidelines on the use of sacred sites are clear.

The four-page memorandum of agreement was signed by former Sen. Kookesh on behalf of Sealaska, and by Tribal Council chairman Mike Baines.

Afterwards, Worl discussed why Redoubt was sacred. She said she’d been down to visit the falls.

“I could feel the essence of that site. I could imagine the long use of it by our ancestors. I’m also aware that it was a site used by the Russians, and so there is that part of history that is there. Although that doesn’t have the kind of sacred dimensions, we do recognize the significance of the Russian occupancy.”

Sitka Tribal chairman Mike Baines said his organization had no immediate plans for Redoubt, if Sealaska were to finally receive the land. But he acknowledged that there were possibilities for cultural education in the area.

For him, signing the management agreement was about fulfilling the mission of his office.

“When we say our oath of office on the council, one of the most important things is that we’ll work to protect the traditional resources of the Tlingit in the area. And Redoubt is one of those resources — so that’s what we plan to do.”

The management agreement will not affect the Forest Service, and the $100,000 taxpayer funded lake fertilization program. Sealaska’s Worl said she hoped the federal government continued to pay for the program.

Separate Sealaska land selection legislation, affecting nearly 70,000 acres of timberlands on the Tongass, and another 80 sacred sites, is currently before Congress.