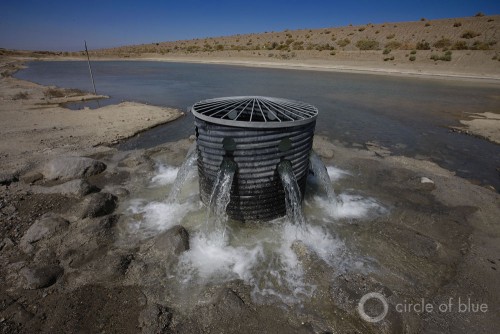 Photo © Brent Stirton/Reportage by Getty Images for Circle of Blue
A groundwater recharge facility for the Coachella Valley adds water imported from the Colorado River to the valley’s main aquifer and prevents the land from sinking and damaging the surrounding infrastructure.

A court test of federal water law by the Agua Caliente Band of Cahuilla Indians has implications for the American West.

By Brett Walton, Circle of Blue

As California implements a landmark law to balance demand for groundwater with available supplies, an Indian tribe’s lawsuit in federal court has the potential to add new layers of complexity to managing a prized resource that is in short supply during California’s worst ever drought.

The Agua Caliente Band of Cahuilla Indians filed the suit on May 14, 2013 against the Coachella Valley Water District and the Desert Water Agency, two water suppliers in the tribe’s southern California desert region near Palm Springs. The case, straightforward in its goals, addresses two primary concerns: halting groundwater levels that have declined at an average rate of more than one meter per year since 2000, and stemming pollution in the groundwater beneath the 12,545-hectare (31,000-acre) reservation.

The Agua Caliente complaint reflects the growing willingness of Indian tribes across the American West to pursue, by court action or negotiated settlements, clear legal recognition of water rights that are held in trust by the U.S. government. The flexing of tribal legal muscle, which occurred first for surface water rights in the 1980s, has now expanded to seeking more authority over the use of groundwater. The result of these actions is that a new era of water management in the West is taking shape, one in which the old brokers — the cities, counties, and irrigation districts — will have to make room for another seat at the table.

Just like the tribal lawsuit, California’s 2014 law to fortify supplies and improve distribution of groundwater was prompted by rapidly diminishing aquifers and inadequate authority by local or state officials to curtail indiscriminate use. The convergence of the new state law and the federal lawsuit, along with helping to clarify who in California has access to and control of groundwater, has other wide-ranging implications. The Agua Caliente case could be a model for tribes in California that seek greater influence in water management decisions. And the tribe’s suit could set a precedent for how groundwater rights for Indian tribes are interpreted nationally.

Some see the case, now in the Ninth Circuit Court of Appeals, eventually reaching the U.S. Supreme Court. “The lawsuit is very significant,” Anecita Agustinez, tribal policy advisor for the California Department of Water Resources, told Circle of Blue, explaining that the case could prompt other tribes in California to file claims to groundwater. “I believe you can’t have groundwater management unless you have tribal participation. They live on significant rivers and watersheds.”

California is an important legal testing ground. The state is home to more than 100 federally recognized Indian tribes, from the Karuk reservation near Oregon to the Campo reservation on the Mexican border. The Agua Caliente is perhaps the first in the state to seek official recognition and quantification of its legal rights to groundwater. The tribe, by suing for its rights, wants a greater say in how water is managed in the valley.

“These practices are not acceptable for long-term health and viability of the Coachella Valley water supply,” Tribal Chairman Jeff Grubbe said in a statement in March, referring to the shrinking aquifer and decline in water quality. “We called out this detrimental practice and brought it to the attention of the water districts over and over for years simply to be ignored.”

The Agua Caliente lawsuit covers a few exacting points of jurisprudence — legal ownership, for example, of the space between soil particles that could be used for storing water underground. But the lawsuit makes two broad claims about water quantity and quality that could rebalance current management practices in the region and state.

The first claim is that the tribe has a federal reserved right to groundwater from two basins beneath the Coachella Valley. A federal reserved right was established in the seminal 1908 Winters decision in the U.S. Supreme Court, which found that the U.S. government, by establishing a reservation, implicitly set aside enough water for the tribe to make a living from the land. On March 20, 2015, the U.S. District Court of the Central District of California ruled that the Agua Caliente do have a reserved right to groundwater. An appeal of that ruling is being heard by the Ninth Circuit.

The second broad claim is that the valley’s two water agencies — Coachella Valley Water District and Desert Water Agency — are polluting the aquifer with imported Colorado River water, which is saltier than the local sources. The agencies pour Colorado River water, which is delivered by canals, into sandy-bottomed percolation basins throughout the valley to bolster sagging groundwater levels. The agencies acknowledge that the Colorado River supplies are saltier but do not admit that the practice of recharging the aquifer has increased its salinity. The Agua Caliente argue that their groundwater rights entitle them to water without added salts. This claim is being litigated in a second phase of the lawsuit.

A third phase of the lawsuit will consider numbers: How much groundwater do the Agua Caliente own? Do they have a right to water of a certain quality? What should the standard be? Only phase one — the determination that the tribe does indeed have a right to groundwater – has been completed by the district court.

The lawsuit makes the Coachella Valley water agencies nervous. The changes that are in store if the Agua Caliente are granted rights to a significant portion of the aquifer could be substantial. 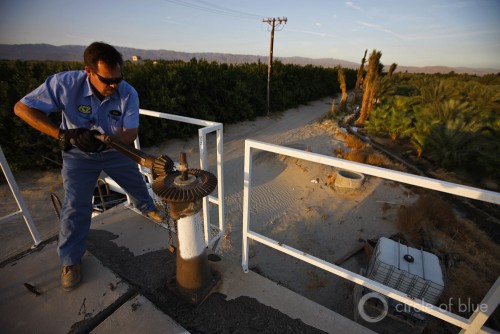 Photo © Brent Stirton/Reportage by Getty Images for Circle of Blue
Chris Thomas, 44, works as a zanjero, or ditchrider, who regulates waterflow to agriculture in the Coachella Valley. Zanjeros deliver irrigated water to farmers and other users, adjusting flow according to calculations from the Coachella Valley Water District Authority.

“There’s a great deal of speculation,” Katie Ruark, spokeswoman for Desert Water Agency, told Circle of Blue. “The tribe hasn’t said what they plan to do with their rights.” Ruark mentioned water rate increases — if the agency was forced to buy back water from the tribe — as one potential effect. Then there is the tribe’s well-documented displeasure with the decline in groundwater levels, which could prompt a reduction in pumping.

Agua Caliente’s spokeswoman Kate Anderson referred Circle of Blue to the tribe’s website and did not respond to follow up questions about the tribe’s role in managing the region’s aquifers and what changes it would like to see.

The lawsuit coincides with a transition in California’s groundwater practices. The state’s groundwater reserves plunged to record lows in the last four years of drought. Little snowmelt or rainfall percolated into the ground while prodigious amounts of water were pumped out to sustain the country’s largest agricultural economy. Thousands of rural wells have gone dry.

Farmers and cities in most of the state were allowed to pump without limits because there was no authority to regulate groundwater. That changed last September when Gov. Jerry Brown signed the Sustainable Groundwater Management Act, which requires the state’s most important groundwater basins to form management agencies by 2017 and align water withdrawals with water availability by 2040.

Anecita Agustinez, the state’s tribal policy advisor for water, said that how the tribes fit into the evolving management picture is still being discussed. Tribes are not allowed to form their own groundwater management agency, but they can participate in a joint effort with cities, farm districts, and other local agencies. She called the integration of tribal authority a “potential hurdle.”

“It’s all very new,” Agustinez said. “We’re working on guidelines now.” She said that the documents that local agencies must fill out when they form a management body asks whether they consulted with tribes.

Integrating tribal claims represent a new demand in the system and could displace existing water uses, not just for California but for all western states, according to Steve Greetham, chief general counsel for the Chickasaw Nation, in Oklahoma. “It’s a challenge when looking at potentially thousands of property owners who have a stake in the outcome,” he told Circle of Blue.

In Arizona, which has settled more Indian water claims than any other state, the tribes have emerged as co-managers and essential partners with the state’s cities and water agencies.

If the Agua Caliente are granted rights to a certain quantity and quality of water, as they seek in the lawsuit, they will force the issue in the Coachella Valley and potentially open a door for other groundwater claims in California.

How a groundwater right would work in practice in California, where “pump as you please” is the current operating principle, is an unresolved question. Courts elsewhere have faced the same issue and have ruled in favor of tribes. In the last 15 years, the Arizona and Montana Supreme Courts, and a U.S. district court in Washington State determined that Indian tribes do have rights to groundwater based on the reserved rights doctrine. The U.S. district court decision in the Agua Caliente case follows that precedent.

“There’s a trend toward the courts finding that tribes have a right to groundwater,” Ryan Smith, a lawyer at Brownstein, Hyatt, Farber, and Schreck who specializes in Indian law, told Circle of Blue.

The lack of a standard has “muddied the waters” at the state level, Greetham asserted. “As a tribal advocate, I think that’s terrible,” Greetham told Circle of Blue. “[The states] don’t all apply the doctrine with the same rigor.”

The variability is one reason that the U.S. Supreme Court could take up the Agua Caliente case. Roderick Walston, the attorney representing Desert Water Agency, told Circle of Blue he thinks that the losing side will appeal to the U.S. Supreme Court and there is a good chance the justices will review it. Smith agreed, saying that the court might want to conclusively settle the matter.

Others argue that the precedent set by the lower courts is compelling evidence that a groundwater right does exist and that any U.S. Supreme Court decision would refine the definition of how to apply it.

The legal right to groundwater, in other words, is likely to be upheld. For California agencies, it is another factor to consider as they follow the long path toward groundwater sustainability.