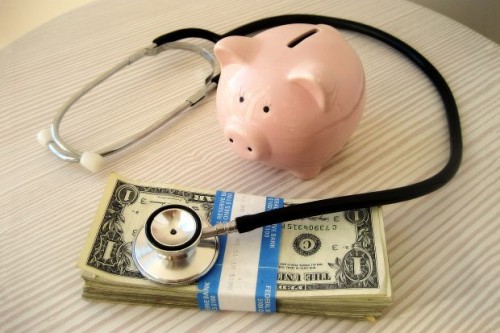 Most Americans are supposed to have health insurance under the Affordable Care Act. But up to 50,000 Alaska Natives and American Indians in Alaska are excused from the requirement. They have to apply for that lifetime exemption though. And the federal government is mishandling many of those applications. 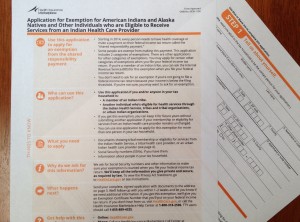 The form Alaska Natives and American Indians need to fill out to get an exemption from the individual mandate.

Evelyn Burdick thought it would be easy to apply for her American Indian exemption. As a member of the Cherokee Nation, the Anchorage resident sees a doctor at the Alaska Native Medical Center. Burdick likes the care she gets there and has no plans to sign up for private insurance under Obamacare. So she sent an exemption application to the federal government almost as soon as it was available, on January 9th:

“I have yet to receive any correspondence from them back whatsoever. Not even to let me know they’ve received my application.”

Burdick is not alone. The Alaska Native Tribal Health Consortium has helped hundreds of Alaska Natives and American Indians in the state who have had problems with their exemption applications. The exemption is a simple six digit number applicants need for their tax forms to avoid paying a penalty ($95 dollars or 1% of income, whichever is greater) for not having health insurance. Monique Martin, with ANTHC, has been working with the federal government to resolve the problems:

“Every time we call it’s a bear with us sort of request but we’ve been bearing with them since February when we first started reporting issues and we are anxious for a resolution to this issue.”

The Federal government has fumbled the applications in several different ways. Martin works closely with three other people at ANTHC who all applied for the exemption for themselves. Martin’s exemption number came back with no problems. But her three colleagues were not so lucky:

“One of our coworkers received her letter twice, with two different exemption numbers for her and her kids. One received the wrong exemption… and another one is still waiting to hear on her application. So we’ve seen all the errors come to us, so we have real world examples that we can show the federal government.”

No one from the Centers for Medicare and Medicaid Services was willing to do an interview for this story. In an e-mail, a spokesperson with the agency wrote that they are working to improve the process daily and committed to providing consumers with their exemption numbers in time for tax filing season. Martin says she’s cautiously optimistic that can happen:

“We are the squeaky wheel in Alaska and we’re really pushing the federal government to resolve this issue and to get this addressed for people so they aren’t negatively impacted.”

Martin worries about how the federal government will handle the rush of exemption applications as tax time approaches. She expects many Alaska Natives and American Indians haven’t even thought about sending in the application yet. Evelyn Burdick, who was proactive and applied early in the process, says the nine month long wait for a response has been frustrating:

“I don’t want to be penalized for not having the healthcare.gov insurance. I’m trying to follow the rules and regulations that healthcare.gov set up and they’re not making it any easier.”

Late last month, Monique Martin was able to get Burdick’s exemption number for her from a contact at the federal government. Burdick is happy to have the number, but she still wants to see it in writing. She says she has no idea when it will arrive in her mailbox, but at this rate she’s not expecting it any time soon.

This story is part of a reporting partnership between APRN, NPR and Kaiser Health News.