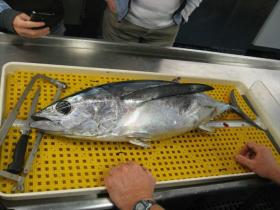 Researchers at Oregon State University have found trace levels of radiation from Fukushima in albacore tuna caught off the Oregon coast. Results of the study are being published in the journal Environmental Science and Technology.

The Fukushima Daiichi nuclear power plant was destroyed by the earthquake that hit Japan in 2011. Radiation has made its way into the Pacific Ocean, raising concerns about exposure to Cesium-134 and 137.

Two OSU researchers, Jason Phillips and Delvan Neville, looked specifically at albacore tuna. The large fish migrate far distances and are near the top of the aquatic food chain. The study found detectable levels of Fukushima radiation in the 4-year-old fish. The majority of age 3 fish had no detectable level of Cesium-134. Neville said the amount found is very small compared to the radiation people are exposed to everyday.

“A year of albacore, which for the average American is about 16 pounds, at the highest concentration we saw is the same dose you’d get by spending 23-seconds in a stuffy basement,” Neville said.

Other authors of the study were Richard Brodeur of NOAA’s Northwest Fisheries Science Center, and Kathryn Higley of the OSU Department of Nuclear Engineering and Radiation Health Physics. The study was supported by OSU and NOAA, with continued support from the Oregon Sea Grant.

Neville said the next round of research will study a larger number of albacore. For his dissertation, Neville will examine the near-surface food web along the coasts of Washington, Oregon and Northern California.