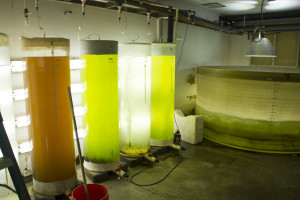 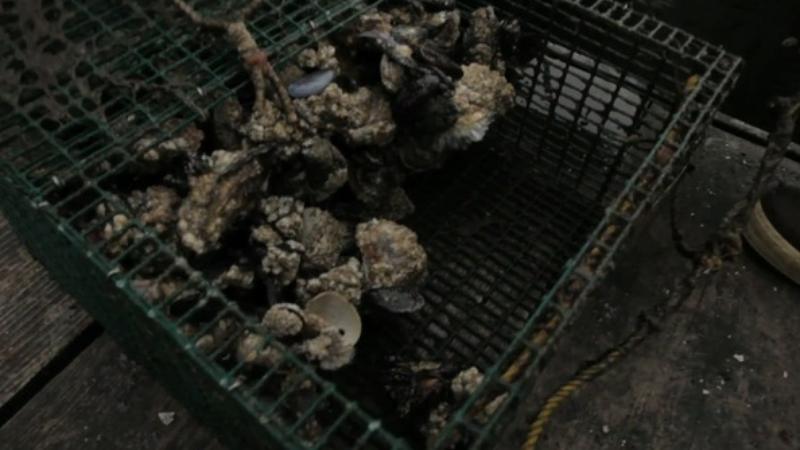 Click image to watch video or listen to interview.

The Pacific Northwest is known for its seafood, but when algae blooms in coastal waters, it can release toxins that poison shellfish and the people who eat them. Katie Campbell of KCTS in Seattle reports on the growing prevalence and toxicity of that algae, and how scientists are studying a possible link to climate change.

HARI SREENIVASAN: Next to the West Coast, where algae has been poisoning shellfish and subsequently people.In recent years, toxic algal blooms have been more potent and lasted longer.That has scientists trying to understand whether climate change could be contributing to the problem.

For Jacki and John Williford and their children, it’s the story of a miserable camping trip on the Olympic Peninsula in the summer of 2011.It all started when the Willifords did what Northwest families do on coastal camping trips.They harvested some shellfish and cooked them up with garlic and oregano.

JOHN WILLIFORD, father:Oh, they were amazing.I was like, wow, these are pretty much the best mussels I have ever eaten.And I think I said in a text to Jacki.

JAYCEE WILLIFORD, daughter:They were the best mussels in the whole wide world.

JOHN WILLIFORD: Is that what you said?Yes.

KATIE CAMPBELL: Two-year-old Jessica and 5-year-old Jaycee were the first to get sick.Next, John got sick.

JACKI WILLIFORD, mother:They just were so violently ill, and I just knew it had to be the mussels.And that next week, I called the health department and said, I think we got shellfish poisoning or something from the shellfish.And that’s when all the calls started to come in.

KATIE CAMPBELL: It turned out that Willifords were the first confirmed case in the United States of people getting diarrhetic shellfish poisoning.DSP comes from eating shellfish contaminated by a toxin produced by a type of algae called Dinophysis.

It’s been present in Northwest waters for decades, but not at levels considered toxic.

NEIL HARRINGTON, Jamestown S’Klallam Tribe:It’s unfortunate to discover you have a new toxin present by people getting ill.

KATIE CAMPBELL: Neil Harrington is an environmental biologist for the Jamestown S’Klallam Tribe in Sequim, Washington.Every week, he collects water and shellfish samples from the same bay where the Willifords harvested mussels two summers ago.He tests for Dinophysis and other naturally occurring toxins in shellfish.

KATIE CAMPBELL: A number of factors can increase the size and severity of harmful algal blooms.As more land is developed, more fertilizers and nutrients get washed into waterways.It’s a problem that has also hit Florida and the Gulf of Mexico as well.

KATIE CAMPBELL: But on top the local problem of nutrient runoff is the larger issue of global warming.Scientists believe the increase in prevalence and toxicity of Dinophysis is linked to changing ocean chemistry and warming waters.

STEPHANIE MOORE, National Oceanic and Atmospheric Administration:There’s a whole lot of changes that are occurring in Puget Sound, and not — and they’re not occurring in isolation.And that’s the challenge for scientists.

Because climate change is expected to raise temperatures in the coming decades, Moore says that could directly affect when and where harmful algal blooms occur.

STEPHANIE MOORE: We’re going to have to look for these blooms in places and during times of the year when, traditionally, we haven’t had to worry about them.Their impacts could then span a much larger time of the year, and that could cost a lot more money in terms of the effort that needs to go into monitoring and protecting the public from the toxins that they produce.

KATIE CAMPBELL: Washington has one of the most advanced algae and shellfish testing systems in the country.It’s in part because of the state’s 800 miles of shore and its multimillion-dollar shellfish industry.

Today, Moore is testing a new piece of equipment that has the potential to raise the bar even higher.The environmental sample processor, or ESP, automatically collects water from a nearby shellfish bed, analyzes the samples, and sends Moore a photograph of the results.

STEPHANIE MOORE: This is a huge advancement in our ability just to keep tabs on what’s going on, and in near real time.It’s amazing.

KATIE CAMPBELL: Moore says she hopes that, next year, the ESP will be equipped to monitor for Dinophysis, the toxin that caused the Williford family to get sick.

In the meantime, Jacki Williford says she will continue to be extremely wary of eating shellfish.

JACKI WILLIFORD: I think it’s scary because you just — you just don’t know what you’re getting anymore in food.

KATIE CAMPBELL: As for the rest of the family, well, not everyone has sworn off mussels.

JOHN WILLIFORD: It doesn’t change a thing for me.

JACKI WILLIFORD: For him.

HARI SREENIVASAN: Jaycee might keep eating mussels, but the high levels of toxins have forced the Washington State Department of Health to shutdown shellfish beds in six counties around the Puget Sound.