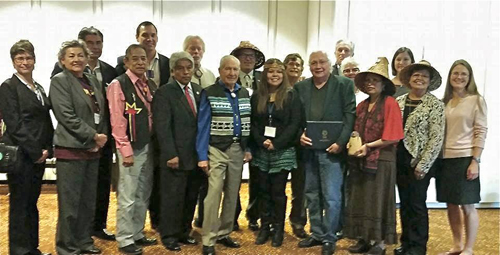 Swinomish stands with Harvard representatives for a group photo after being awarded at the 2014 NCAI Conference in Atlanta, GA. Photo courtesy Brian Cladoosby. #SalishSeaOilFree

CAMBRIDGE, MASS, OCT 29 – From more than 60 applicants, six tribal governance programs have been selected as 2014 Awardees by the Harvard Project on American Indian Economic Development’s Honoring Nations program. The Honoring Nations awards identify, celebrate, and share excellence in American Indian tribal governance. At the heart of Honoring Nations is the principle that tribes themselves hold the key to generating social, political, cultural, and economic prosperity and that self-governance plays a crucial role in building and sustaining strong, healthy Indian nations.

Calling them trailblazers, Chairman of the Honoring Nations Board of Governors Chief Oren Lyons (Onondaga) says, “the 2014 Honoring Nations awardees look down the long road and don’t get lost in the demands of the moment. They are about our future, and the children coming, and the responsibilities of all leaders to their nations.”

Administered by the Harvard Project on American Indian Economic Development at Harvard Kennedy School, Honoring Nations is a member of a worldwide family of “governmental best practices” awards programs that share a commitment to the core idea that government can be improved through the identification and dissemination of examples of effective solutions to common governmental concerns. At each stage of the selection process, applications are evaluated on the criteria of effectiveness, significance to sovereignty, cultural relevance, transferability, and sustainability. Since its inception in 1998, 118 tribal government programs and three All-Stars programs have been recognized from more than 80 tribal nations.

Presentations and dissemination of the work of the 2014 awardees will include exhibits at the Smithsonian Institution, a web platform through Google Cultural Institutes, written and video reports and case studies, executive education curriculum, and national presentations.

The 2014 Honoring Nations awardees are: